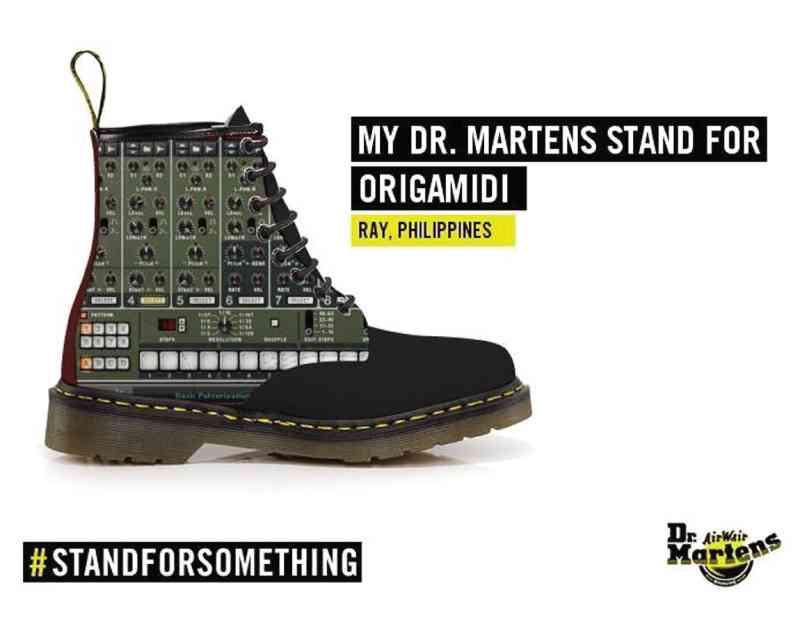 Raimund Marasigan designs his own Docs

When Dr. Martens Philippines asked Raimund Marasigan to design his own 1460 boot using the brand’s Design A Boot Facebook app, the musician didn’t have to look far for inspiration.

He said that Squid 9, one of his bands, is releasing a new album. “Reason 7 ’yung ginamit kong software for that album. I took a screenshot of the drum machine that was used for every song and I used it in my design.”

The boots, which he called “Origamidi,” is named after Squid 9’s album which is due for release later this month. “It’s Midi (Musical Instrument Digital Interface). Origami, tupi-tupi, parang it’s built from samples, loops and live instruments.”

Raimund is excited about the unique way his band will be selling the album. Fans can buy it through vending machines at the album launch at Cubao X on March 28 and also at Squid 9 gigs. Nope, it won’t come in a CD format—the songs will be in USB drives hidden inside cans of squid flakes. “So kakainin mo muna ’yung squid flakes bago mo makuha ’yung album,” he explained.

And since Doc Martens will be producing his Origamidi pair for him, he can rock it while promoting the album that inspired the boots.

In April, he is headed to London for a concert with the rest of the Eraserheads, the band that catapulted him to fame in the 1990s.

Rayms was handpicked as Dr. Martens’ Design A Boot ambassador. “Raimund has been a great part of Filipino music history, but at the same time is still creating the music of the future. As a brand, we hope to do the same,” said Borgy Manotoc, Dr. Martens Philippines’ director of marketing.

Rayms has been wearing the brand for 20 years now. “I got my first pair in the ’90s. I had a lot of pairs then kasi punk rock, grunge, ’di ba?” He still remembers his first pair—black eight-hole 1460s—which he still has now. “I still get to wear it on a regular basis. I have three of my pairs from the ’90s. Hindi sila mukhang from the ’90s, aged leather lang.”

The latest Docs he bought were 1461s—a three-hole pair that he wore to a wedding.

We asked him to choose just one pair of Doc Martens that he’d wear for the rest of his life, but he insisted on two. “’Yung black pair from the ’90s that goes with everything, and this one, kasi de-zipper. It also goes with everything,” he said, pointing to the rugged, zippered and buckled light brown boots he was wearing at the app launch.

Asked what he loves about Dr. Martens, he said, “It’s indestructible.”

“Support local music,” Raimund Marasigan said. We asked him for top five Pinoy acts people should watch live now. This is his list:

Read Between the Lions

Design your own boot

FOR THE second time since 2008, Dr. Martens is allowing fans of the brand to create their own 1460 design, this time using their Design A Boot Facebook app. This global competition is part of the brand’s #StandforSomething campaign. Two winners will be chosen from each of the 15 participating countries. In the Philippines, one lucky guy and one lucky girl will be selected. Their special prize? Their winning design will be made in their size so they can wear their unique pair.

1. Go to the Dr. Martens Philippines Facebook page (www.facebook.com/DrMartensPH) and click on the Design A Boot app.

2. Upload an image that you wish to add to your boot’s quarter panel. It can be a photo, a graphic, an illustration—any image, as long as you own it.

4. Tell the brand what you stand for.