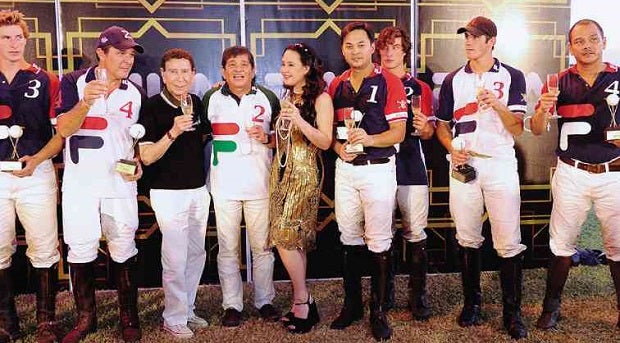 The 2014 edition of the Fila Polo Cup recently took place in extravagant fashion with “The Great Gatsby” as theme.

Fila Philippines CEO and president Cris Albert led the champagne-flavored celebration that harked back to the fabulous 1920s Charleston era.

Being a keen polo player, Butch Albert fiercely went for the win in Sunday’s Game 1 along with nephew and youngest polo player Tommy Bitong. Other team members were Santi Elizalde and Jay de Jesus.

Game 2 had the team of Iñigo Zobel, Juan Jauretche, Alfie Araneta and Cole Aguirre going for the gold with Zobel scoring the winning goal.

“Fila’s direction for 2014 is definitely retro,” said Fila VP for advertising Ana Abad Santos. “The new designs are going back to Fila’s roots. Vintage and retro are the order of the day.”

The collection included the Flapper look for the ladies and top hats for the gents, dahlings.

The fabulous Broadway musical “Wicked” is on its last weekend run in Manila after several extensions. It has been much acclaimed, called “the best musical of the decade” by Entertainment Weekly and “a cultural phenomenon” by Variety, palangga.

Citi Philippines hosted an appreciation night for its corporate clients and partners, treating them to watch an exclusive showing of “Wicked.”

In the past, dahlings, Citi has sponsored the showing of other touring Broadway and West End productions of “Cats,” “Phantom of the Opera” and “Mamma Mia!”

Lifestyle Asia threw a bash at the sleek Buddha Bar for the publication’s launch of the second edition of its “Home and Away” coffee-table book, which features private residences here and abroad.

The first edition made it to the Top 10 Best-selling Philippine Publications of both National Book Store and Powerbooks in 2013, and received the prestigious Philippine Quill Awards.

The guests swooned while being serenaded by saxophonist Vince Lahorra and fab jazz singer Cara Manglapus and her band.

The second “Home and Away” showcases more gorgeous residences, hotels and lodgings, covering a vast range of styles and looks.

Lifestyle Asia’s “Home and Away” is available in bookstores and newsstands nationwide. Log on to lifestyleasia.ph.