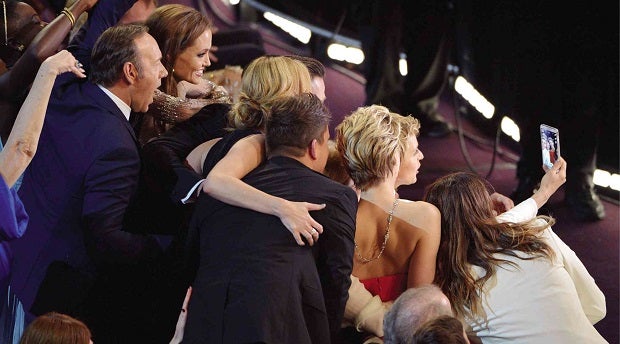 And the winner is… Samsung’s Galaxy Note 3

Product placements in movies and TV are nothing new. Here, it has become a game to guess which starring actor’s endorsement will get the most exposure in a movie.

Though the Samsung Galaxy Note 3, which was used to capture the history-making selfie, was not awarded a golden statuette that evening, it was a winner that night for being part of social media history.

The Wall Street Journal reporter Suzanne Vranica wrote that the electronics giant spent around $20 million on ads to be aired during telecast breaks. The selfie, though, was not explicitly part of the $20 million ad buy; it was part of the sponsorship agreement to integrate the Galaxy Note 3 into the show, but the brand never stated exactly how the device should get airtime.

As it happened, Ellen reportedly said she wanted to take selfies during the show, and ABC, the network airing the Academy Awards, saw the opportunity to include the Galaxy Note 3.

Samsung execs were reported to have given DeGeneres a crash course on how to use the Galaxy Note 3.

The rest is viral history.

Days after the Oscars selfie, some pundits took perverse pleasure in pointing out that Ellen was using a different phone to tweet from backstage. That didn’t matter much in the grand scheme of things, because, ultimately, Samsung emerged victorious with all the mileage it received.

Such mileage may not guarantee smartphone sales, but one thing  clear from the Oscars selfie is that the Samsung Galaxy Note 3’s front-facing camera is more than capable of clearly capturing selfies for big groups of people. Sure, your group selfie probably won’t look as good as the Oscars version—after all, you probably don’t know anyone as hot as Bradley Cooper (if you do, please allow us to join the selfie).

In a statement, Samsung said it was delighted at how DeGeneres “organically incorporated the device into the selfie moment that had everyone talking.” They were so elated that Ellen announced on her show post-Oscars selfie that Samsung had pledged to donate a dollar for each time someone retweeted the photo.

At that time, the photo had already garnered 2.8 million retweets, so Samsung ended up donating $3 million to Ellen’s charities of choice (St. Jude’s and the Humane Society each received a cool $1.5 M.) That, and everyone in the studio audience was given a Galaxy Note 3 to take home.

The Oscars selfie has spawned so many parodies and copycats that you know you will be roped into participating in a huge group selfie a la Oscars during a party. Just be sure you have a phone with a camera as capable as that of the Galaxy Note 3, and someone with good reach to take the photo.