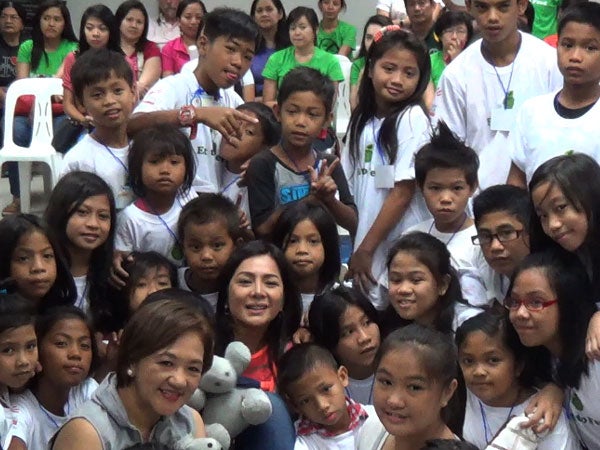 On Women’s Day, kids hear tales of queens at Read-Along

Actress Alice Dixson read “Alamat ng Papaya” by Rene Villanueva, a story about a brave queen who died defending her people, while veteran Read-Along storyteller Dyali Justo read “Ang Hukuman ni Sinukuan” by Virgilio Almario, a story about a queen who taught her subjects the value of justice and fairness.

“It was my first time to read to kids, and while reading I recalled my own experience as a child who enjoyed listening to stories,” said Dixson. “I tried to do a good job today so the kids would enjoy their experience, too. I hope they had as much fun as I did.”

“The children were very sweet and refreshing,” she added. “Since the story was new to me as well, there was an element of surprise to it. Like the kids, I was also eager to learn about what would happen next,” she said. “The experience of the kids was my experience as well—we were excited about the story together.”

Throughout her storytelling, Dixson encouraged the children to join her in learning more about the difficult words in the story. “They were very receptive. I was honest. I asked them to correct me if I mispronounced a word. I wanted us to learn from each other,” said Dixson, who stars in the TV5 comedy series “Confessions of a Torpe.”

“The story is about the importance of loyalty. As Filipinos, that is one of our enduring qualities. Despite hardship, we Filipinos are a loyal people,” she said, adding that she hoped the girls in the audience would learn from Reyna Lingap, the story’s protagonist.

“We need to be courageous as women. As women, we are the foundation of families,” she said, adding that she learned a lot of life lessons from her own women role models—her mother and sisters.

For 13-year-old Erick, a participant from ChildHope, the story read by Dixson taught him to be generous. “We should not hesitate to help those who are in need.”

Hannah, a Grade 5 student at St. Anthony of Makati Montessori, said she learned the values of honesty and kindness. “If you are honest and kind to someone, he or she will be the same to you.”

Jomari, 13, of Virlanie Foundation shared the same sentiment. “We should be loyal to someone who has been kind to us.”

Rogelio Dejan, Hands-On Manila volunteer, said overseeing the kids was difficult, but they had fun interacting with the storytellers during the program. “I’m thankful to be part of this organization as it gave me opportunity to reach out to street children.”