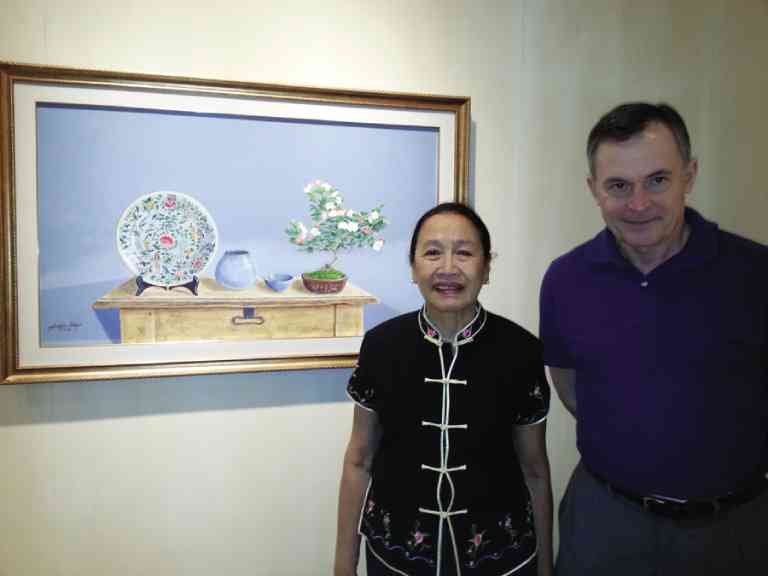 Twenty years separate the themes and contents of the two exhibits. The Aliww exhibit “The Joyful Mysteries” consists mainly of social commentaries in acrylic on canvas, etchings, collage and mixed media. The Altro Mondo show highlights the serenity of the artist’s heart.

Aliww is an archival facility that collects writings by and about Filipino women in all areas.

At the opening of the Aliww exhibit on Feb. 27, cultural luminary Deanna Ongpin-Recto lauded Tequi’s adventures as artist and lifetime friend.

Tequi says of the exhibit: “The basic premise is that, if Christ lived here and now, he would be part of the simple people and live their simple happy lives. It is my way of elevating, sanctifying the ordinary people.”

“Visions change, life evolves, age sets in, and one learns to trim down,” says Tequi.

She has made the tiny and quaint rural village of Limeuil  in  Southwest France  her  home after Manila, Paris, Hanoi and Hong Kong, where her banker husband of 41 years, Marc Tequi, took her and their brood of three.

She collects joyful memories, the happiest of which was meeting and eventually marrying Marc, the French instructor at University of the Philippines Diliman, where she also taught.

Recto recalled that it all started as a jest, while she and her friend were boy-watching at the faculty center. Seeing Marc pass by, Ofelia quipped: “Marc Tequi, may araw ka rin… at gabi!”

Tequi was born in Iloilo. She received her Bachelor of Fine Arts and AB English from UP Diliman.  She obtained her Diploma in Painting from the Accademia de Belle Arti di Roma in Italy, and a Rockefeller Foundation scholarship for Special Studies in Graphic Arts at the Pratt Institute in New York.

“My yearly exhibits in Manila are perfect excuse to see family and friends. It is always a pleasure to renew contact and simply be here,” she  says.

Her prints, paintings and etchings speak volumes of her native land. She uses references to the past “to serve as contrast to the present, or to show the continuity,” she says.

Asked about what she thinks of the present state of Philippine art, Tequi says: “It is a far cry from the lonely landscape we had faced when I started. Now the art world is bustling. The artist is even very sought after. There are a lot of galleries. There are a lot of artists. People are more aware of the arts.

“It’s like an evolutionary process. Many are there, but only some will survive, move on, and spawn new forms of artistic expressions.  The Pinoy is big-hearted and simply  noble.”

Ofelia Gelvezon Tequi’s  exhibit at Altro Mondo   runs until April 4. The Aliww exhibit  runs until May 31.