The race season is on | Inquirer Lifestyle ❮ ❯ 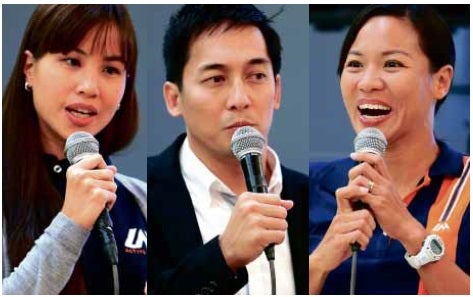 The race season is on

This year, in its effort to drum up the importance of health and wellness, Unilab Active Health (Ulah) has lined up a series of exciting races designed to challenge you to go longer and faster, and finish strong.

“We used to focus on the illness side of healthcare because we predominantly offer medicines,” said Alex Panlilio, head of Ulah. “But if you want to serve, you must be able to find holistic solutions—how to be well and how to recover from a state of illness… We want to be the stimulus for people to adopt a healthier lifestyle.”

The annual duathlon of run/bike/run is kicking off on Sept. 7 at SCTEx in Porac, Pampanga, while Bike United is scheduled on May 17-18 at Subic Bay, Olongapo. Slots are limited and go really fast, so register online for your choice of Ulah race.

On top of these, Ulah has also partnered with the Bull Runner’s Dream Marathon, the successful and highly coveted program of blogger Jaymie Pizarro for first-time marathon runners.

“We are the first and only program in the world to cater to first-time marathon runners, and we give runners the best possible race experience,” Pizarro said.

Dream Marathon has become so popular that for this year’s marathon race, 800 slots were purchased online a mere 30 minutes after the registration opened.

For triathlete-wannabes, there’s The NextStep bootcamp headed by the first couple of Philippine triathlon, Ani de Leon-Brown and Dan Brown. The Pinnacle Camp starts on June 6-8 at Pico de Loro Beach and Country Club, while the Exceed Camp is scheduled on Sept. 19-21 in Nuvali, Laguna.

“The camps are for people who want to try a triathlon and see if they can actually race,” said Ani de Leon-Brown.

People have this fear, for instance, of swimming in open ocean. When you throw in an aspiring triathlete with a thousand other athletes in an open ocean, the first experience can be overwhelming, she said.

Active Health has its own line of sportswear and gear. Its latest innovation will make its debut in Run United—sweat-activated singlets. The words of the Olympic core values “Citius” (faster), “Altius” (higher) and “Fortius” (stronger) will show up in the upper back of the singlets when runners begin to sweat.

Active Health also offers sports gels, recovery drinks and vitamins. That means getting the athletes covered, from organized races to garments to pre-race, during race and post-race energy and recovery supplies.

Its first race in 2011 only offered 3K, 5K, 10 and 21K legs. Today, tapping the potential growth of progressive athletes, Ulah trimmed down the legs to three major distances—10K, 21K and 42K.

“When we first started, we didn’t know the potential of these races. We went for one run, but then the running community accepted us. We realized that beyond the run, there is so much more we can do for the community. Our mission is really all about enriching and promoting healthcare and wellness,” Panlilio said.

Giving back to the community doesn’t stop at serving the runners. For the past four years, part of the proceeds of all Active Health events has been going to Gawad Kalinga. From the initial seed money, it has now established a satellite clinic in Bagong Silang, Caloocan City, with its own assigned midwife, doctor and dentist. Bagong Silang, with four villages, is the largest barangay in the Philippines. It is also the first Gawad Kalinga village.

Unilab’s director for external affairs Claire Papa said the company has trained the health volunteers of Gawad Kalinga, and all have a good understanding of the health problems for each village, such as nutrition, tuberculosis, urinary tract infection and eye problems.

“We strongly believe in Gawad Kalinga’s ideals. In every village that they form or establish, there’s an opportunity for us to develop a health system. Unilab doesn’t believe in dole-outs. We want to become a part of the community, and understand the community,” Papa said.