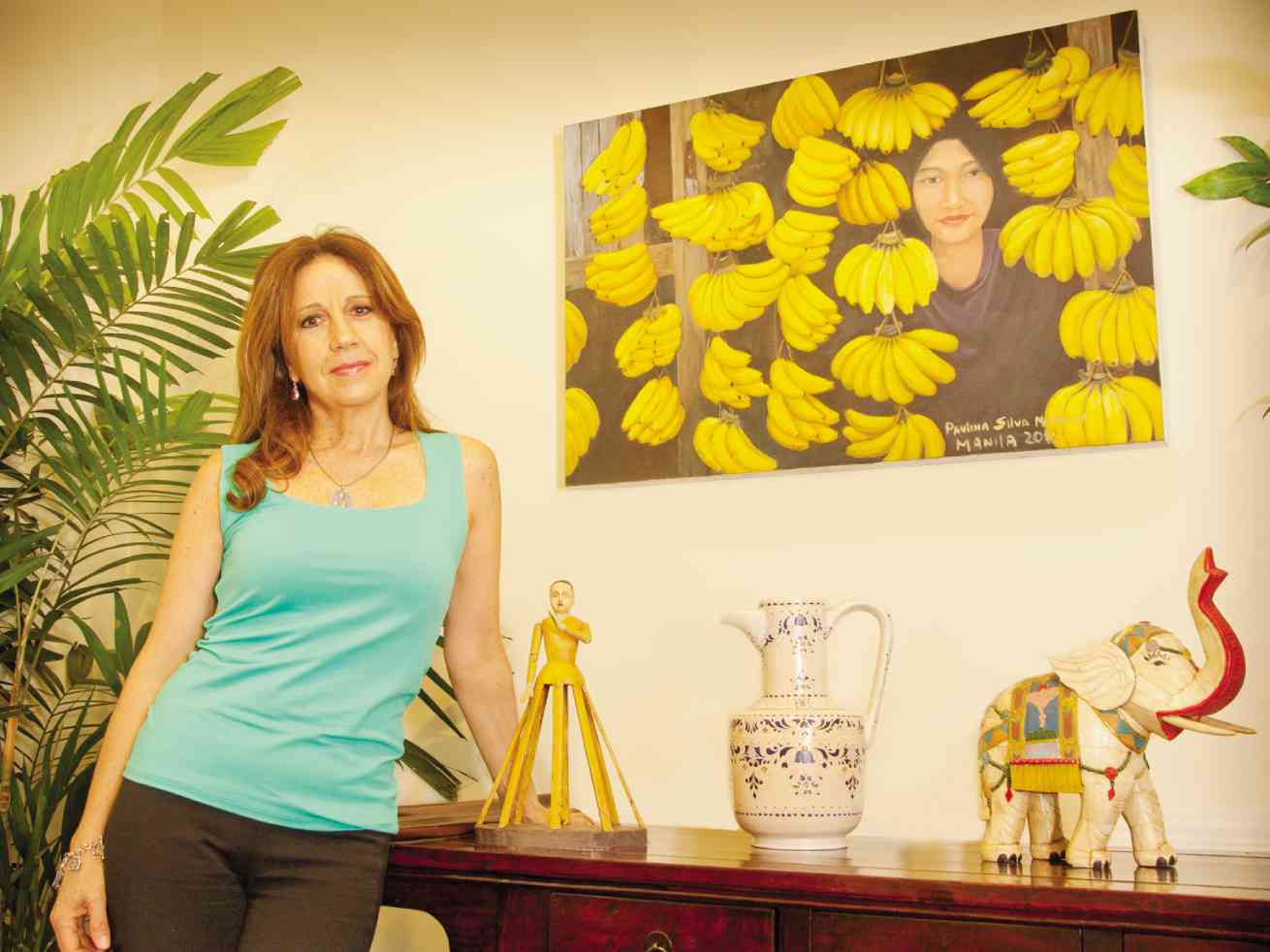 She came to the Philippines to learn how to smile again.

“Chile’s population is small, and it’s quiet. You have to do something to make people smile. Here it’s quite populous. If you’re feeling alone, you just go out and you will meet a lot of people. It’s very alive here,” says Madame Paulina.

Her personal journey here is chronicled, though symbolically, in her paintings.

Madame Paulina was a Business Administration major at Universidad Catolica de Chile when she met Mayorga. A doctorate degree-holder in law, Mayorga taught a course, economic law, which she enrolled in. A student-teacher relationship ensued. After dating for a year, they were married. She was 20, poised for graduation. Mayorga is 13 years her senior.

Madame Paulina’s first job was as consultant at the auditing firm Price Waterhouse, looking at bottom-line and administration of big clients such as Corporacion Nacional del Copre. She then worked at the finance department of Coca Cola, helping streamline the operations, making the production of the different brands cost-effective, and preparing the paperwork when the multinational enlisted in the international stock market.

When Mayorga was invited by Heidelberg University for scholarly work on international and commercial law, Madame Paulina came with their toddlers.

The family also lived in Washington when Mayorga worked for an American law firm, giving legal advice on how US companies can do business in Chile. Meanwhile, she kept herself busy teaching Spanish in a school.

Back in Chile, he was appointed chairperson of that country’s Foreign Investment Committee (FIC) while running his law office, Mayorga y Compañeras. He asked his wife if she could help his clients and oversee the finances of the law firm. She worked with a client, the private insurer Isapre de Chile, making sure that companies duly provided healthcare protection to their employees.

Fascinated with the legal nature of her job, she took up law. However, with only one semester left, she had to stop. Chilean President Sebastian Piñera promoted Mayorga from FIC chairperson to ambassador. Mayorga requested posting in Asia.

Madame Paulina says that each role she plays—a lawyer’s wife, working mother and diplomatic spouse—is unique on its own. “I can’t say that one is better than the other. For so long, my life was about career and children. Here, I had more time to myself, and to engage in hobbies like tennis and painting.”

Arriving here in September 2010, Madame Paulina found the adjustment to a new lifestyle quite daunting. It was the first time she was separated from her six children. Half of them were starting out their careers, while the younger ones were in school.

“My children were left alone in Chile. I would cry all night,” she recalls. Sometimes Mayorga had to travel around the country, leaving her in a big house.

Channeling her loneliness into painting,  she began depicting a sullen Madonna in deep shades of blue and green. When youngest son José Pablo came for Christmas, she rendered another version of a still pensive Madonna, clad in maroon, but now holding the Holy Child, dressed in dark brown.

“That was how José Pablo looked when he was an infant,” she says.

Over time, the palette of her Mother and Child series lightened up. The final study manifests a beaming Madonna in crimson and rose garments, cradling her infant in a forest-green mantle. By then, she had grown to like her environment.

Her feeling of isolation is also captured in a painting of a woman desperately looking out the window. “This is me, waiting for my children to come here or me longing to go back (to Chile),” says Paulina.

Staying in her enclave, she painted impressions of growing up in a farm. She remembers waking up to the sound of the cocks, watching the farmers manually harvest the wheat and enjoying the snowy fields. Images of roosters in the forest, a farmer and his horses collecting bundles of wheat, and bullocks hauling a cart in winter in the mountains serve as visual connections to her past.

“I was more sentimental here because I was far away from the world where I used to live. When you’re sad and nostalgic, you don’t open the doors to see what’s happening. You stay inside your heart and your feelings,” she says.

“I didn’t know anyone except the SHOM (Spouses of Heads of Mission). But it takes time to get acquainted with people. I didn’t speak good English then. I thought it was better to keep quiet, even though I’m not the type. If I go to a Spanish-speaking party, no one can stop me.”

It helped that there were similarities between Chile and the Philippines, both being former Spanish colonies. The environment enabled her to cross the language barrier and make friends easily. Through time, she became more confident in speaking English.

When the Mayorgas’ social calendar got busy, and their children visited the Philippines more frequently, she had no time to mope.

The three older children have an affinity to the Philippines. The eldest, Roberto Jr., a lawyer, plans to do more social work. Marianna, also a lawyer, enjoys being a personal shopper at Rustan’s. Ignacio, the dentist, recently went on a medical mission to Ormoc, Leyte, serving over 250 children.  Meanwhile, Loretto, an English major, is a housewife. Gonzalo is a banker, while José Pablo is a student.

After the adjustment, Madame Paulina says her next phase was improving her technique. She refers to the still lifes of fruits, flowers and landscapes in the dining room as her taller (workshop) series.

“They are not about creativity or expression. I was just studying the lines or positioning an object in relation to the light. I wanted to have some activity when there’s nothing much to do,” she says. The persimmon is a common theme with Chilean painters, as are vegetables in a basket and a fruit beside a pitcher in a farmhouse.

While down with an allergy, she looked out her window and saw the poolside of the residence after the rain. She then painted the pool and garden, capturing the ripples on the water and vibrancy of the foliage. Even the fern-fringed, wrought-iron gate of the residence and the garden became subjects of light and depth.

One of her most defining paintings is the fruit lady in Tagaytay. The Mayorgas and their children would spend the weekend at Tagaytay Highlands. Along the way, they would be attracted to the colorful sight of fruit stalls.

Unlike the lonely lady by the window in a sad, rust-and-brown background, the fruit vendor work depicts a grinning Filipino woman framed by bright-yellow bundles of bananas.

“It’s the calidad humana (quality of life), the smile for the world,” she says.