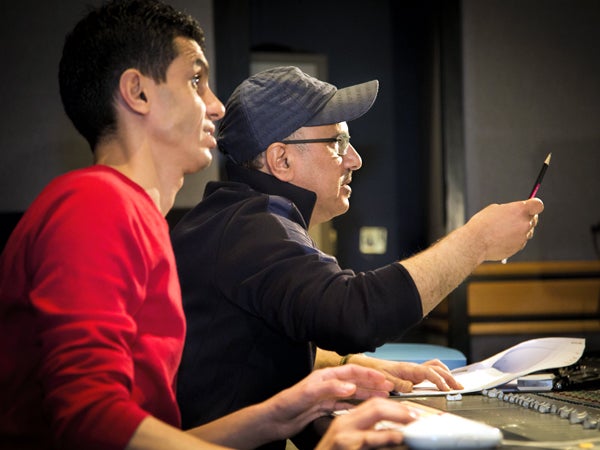 Bahraini musician and composer Khalid Sheikh (right) during the musical recordings of the musical and theatrical epic ‘The Clusters of Light’ - the largest of its kind about Islam.

MANILA, Philippines—The “largest” theatrical performance about Islam is set to be unveiled in the million dollar Al Majaz Amphitheatre of the United Arab Emirates to commemorate the inauguration of Sharjah emirate as “The Capital of Islamic Culture for 2014.”

Bahraini musician and composer Khalid Sheikh announced that he has completed “The Clusters of Light” which will be performed from March 26 up to April 4 at the Al Majaz Amphitheatre, which is already 90 percent complete.

“[It is] the largest of its kind about Islam, involving more than 200 actors and four of the top Arabs stars, Hussein Al Jasmi, Lotfi Bouchnak, Ali Hajjar, and Mohammed Assaf,” the Sharjah media center said in a statement Thursday.

The performance, which was put together by a total of about 750 people, will run one hour and 42 minutes and provide “a true picture about Islam – the human values and message that promote peace, justice, tolerance, and love,” the statement said.

Sheikh said “that this work represents another way that music can be used, beyond daily songs, including telling the tale of the Prophet, peace be upon him.”

He also believes that German artist Christian Steinhauser and the more than 70 musicians from the renowned German Film Orchestra will present beautiful music for an expectant public.

“The production has high technical requirements with many staff participating in the preparation and specialists in representation of supposed historical scenes, using techniques unprecedented in the Arab world and more than 200 actors,” the statement said.

The performance venue is the AED140 million ($38 million) Al Majaz Amphitheatre, which resembles an open air Roman theatre and can accommodate around 4,500 people.

It has been described as “unprecedented” project in the Middle East “with more than 400 animated lights, 120 sound speakers, and 21 projectors.”

“The project aims to ensure Al Majaz Island remains a prominent tourism site, as well as providing an ideal venue for future artistic, cultural and tourism movements in the UAE in general and Sharjah in particular,” Sheikh Sultan bin Ahmed Al Qassimi, chairman of the Executive Committee for the Sharjah Capital of Islamic Culture 2014 Celebrations, said in a statement.