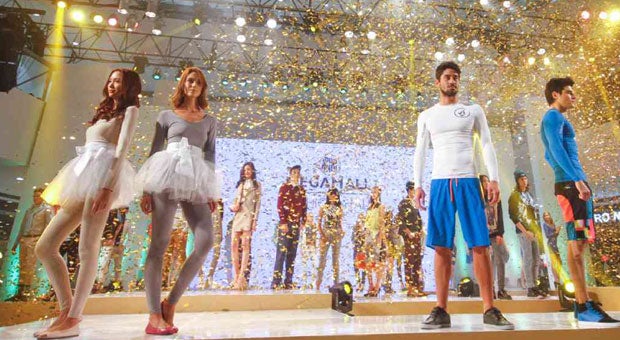 Old Navy next week, H&M in August–battle of brands accelerates even more in 2014

The battle of the brands and local retailers goes full speed in 2014 with new labels, stores and malls being unveiled within weeks of each other, in a scale that this town hasn’t seen in years.

It has been weeks since photos of that soon-to-open H&M space at SM Megamall began popping up on social media. The consumer excitement over the Swedish newcomer can be likened only to Uniqlo’s entry into the country nearly two years ago, where shelves and racks of the Japanese import were emptied within days of opening.

If the competitions are quaking in their high-street boots, they certainly aren’t showing, as all are too busy also unveiling new brands that are poised if not to rival the fast-fashion behemoth, then at least to wangle their share from the pockets of the seemingly flush fast-rising middle class.

“If an international brand succeeds, the entire market gets bigger, right? So, no,” was Anton T. Huang’s answer when asked if he feels the threat of H&M to Stores Specialists Inc.’s roster of high-street brands that include Zara, Aeropostale, Bershka.

“In all other countries today, Zara, Marks & Spencer, they all coexist with H&M and vice versa. H&M, Uniqlo and Old Navy in the US coexist. The aesthetics are very different, so it depends on what you’re looking for. I’m extremely excited for the prospects of Old Navy here. The pricing is great. Brand awareness is fabulous,” added SSI’s executive vice president.

In Cebu, SSI also just opened F&F, an affordable clothing line from the United Kingdom, before it even launched in Manila.

SSI is set to open the first of three Old Navy stores on March 22 in the three-level structure at Bonifacio High Street that used to house Gap and Muji, both SSI brands that are moving to BHS Central, adjacent to SSI’s soon-to-open Central Square, a retail destination that Huang refuses to call a mall “because it’s not big enough to be one.”

“We weren’t really looking into doing this,” he said of SSI’s decision to build its own retail edifice. “We were happy being tenants. It just happened that there was this plot of land that became available, which was part of the BHS Central and a retail zone area, part of that center-of-the-universe area, in the middle of BGC. We felt it was too good an opportunity to pass up in terms of location.”

Central Square, he clarified, isn’t going up against SM’s upmarket mall, SM Aura Premier, which is also in the vicinity. “We’re not big enough,” he said.

Central Square, according to Huang, will house the Ayala Cinemas on the top floor, Marketplace by Rustan’s Supermarkets on the basement, and Pottery Barn and Pottery Barn Kids’ first outposts in the country, brought in by SSI.

(Pottery Barn will go head to head with Crate & Barrel, which will open in SM Megamall, via the SM group. Next year, SSI will also open the outlets for the other Williams-Sonoma brands.)

Central Square will also have the flagships of Marks & Spencer and Michael Kors, and new brands like the Kate Middleton favorite Reiss, Isaac Mizrahi, Spain’s Cortefiel, all SSI imports.

In SM Megamall’s new Mega Fashion Hall, SSI will unveil its two-level Zara store, and another Inditex brand, Pull & Bear, its first in the country.

“There are so many things happening in the retail industry today that hasn’t happened in many, many years,” Huang noted. “This is all part and parcel of the fact that the Philippine

market as a whole is growing, not only in terms of number and disposable income, but even from a demographic standpoint.

“The key demographic, the consumer base, is growing in a very, very fast pace. There are a lot of opportunities. As they say, we’re a consumer-led economy, and that’s the truth of the matter. So a lot of people want to get into the market. For us, it’s a very exciting time. This is allowing us to expand as well. And there’s more opportunity to expand because there are more real-estate developments that are coming up.”

In recent months, SSI itself has diversified into F&B and convenience-store retailing, adding Singapore’s TWG and Japan’s Family Mart to its brand portfolio.

“I think expanding into Family Mart, which also caters to that growing market, made sense,” Huang said. “It wasn’t something that’s out of left field. It was part of being a specialty store retailer.”

He also disclosed that SSI had partnered with Ayala Malls to develop a department store called Wellworth, aimed at that market “between Rustan’s and SM,” and will be at all the new Ayala Malls, the first of which will open on March 28 at the just-launched Fairview Terraces.

But while retailers like SSI can downplay the impact of an H&M in this town to their bottom line, some local brands aren’t quite as confident.

“Yes, we feel the threat of them coming to our shores,” admitted Ronald Pineda, owner of Folded & Hung. He added, however, that “this also entails excitement for us, as we see that the fashion industry is getting stronger in our country.”

Pineda sees the recent developments in retail to be a good challenge, even as he acknowledged it would be an uphill battle to maintain customer loyalty.

“It motivates us to level up our game and not be complacent,” he said. “It will definitely be a challenge to keep our loyal customers, but we feel that as Filipinos, we know the needs of our fellow Filipinos in terms of design, fit and service [and those are key] to keep their continued patronage of our brand. And by [encouraging Filipinos to buy] Filipino products, we help create jobs and support our economy.”

Local clothing giant Bench is less daunted as it continues to leverage on its decades-long dominance of selling affordable fashions. In fact, it’s pursuing its offshore expansion this year across the Asean region with a new store that just opened in Singapore.

brands competitive vis-à-vis imports. “We also utilize one strength that Filipinos have [which is] creativity.

“Also, our experience over the last 27 years has helped us gain more insight into the local market compared to the new players,” Chan added. “We just need to ensure we are competitive in terms of our design and pricing. Also, being the leading Filipino fashion brand and with our roster of celebrity talents, we are able to leverage on these strengths to make Bench top of mind to consumers.”

Suyen Corp. is a major player in local retail, and it’s unique in that it has kept its homegrown labels (Bench, Human) thriving even as it actively brings in global franchises like American Eagle Outfitters and Cotton On, which can be considered direct competitors of its local brands.

“I believe as a whole it is possible for the foreign brands to coexist with the local brands,” Chan said, as he revealed plans to bring in new concepts this year, like Cotton On’s sister brands, Rubi and Typo from Australia, and Japan’s St. Marc’s Café.

SM itself is not being complacent as it’s also bringing in new franchises to place side by side its tenants, to fill its flagship destination, Mega Fashion Hall.

H&M won’t open until August, and is coming in without a local partner, according to Millie Dizon, SM’s VP for marketing and communications.

As for SM Aura Premier, the retail behemoth’s first step at upbranding, Dizon said they’re “happy” at the consumer reception, “especially now that more stores and restos are open, as well as the Skypark, the chapel and the Samsung Hall.”

Huang pooh-poohed speculations that SSI held off its luxury brands from SM Aura as the company purportedly has an implicit agreement with Ayala Malls—an SM competitor—to keep the prestige brands exclusive to the Ayalas.

“We decide where we open based on catchment area, and looking at the Makati City area plus BGC, they’re very close to each other and are basically trading in the same catchment area,” he said.

“With Greenbelt being the luxury-shopping destination—with Hermes there, Louis Vuitton, Ferragamo, Gucci, Prada, etc.—it didn’t make sense to us to open another location nearby. That’s solely the reason. When you do luxury retailing, your whole development should be solely luxury. You can’t have luxury brands next to high-street brands. Everything just has to be luxury and that’s what we’ve done in Greenbelt.”

In fact, Huang added, Ayala had also asked SSI for luxury brands in BGC. “But it’s just too close to Greenbelt.”

Even the labels that are to open in Shangri-La Plaza will not cross over to Makati or BGC, he said, save for Givenchy, which will take over Emporio Armani’s space in Greenbelt 4.

Predicting and adapting to consumer appetites and yearnings look to be the driving force behind the onslaught of new brands, and none of the key retail players are blinking.

“Retail is always dynamic, and we always have to be open to new ideas and change,” Dizon said. “That is our DNA, and with that, we always renovate and innovate to meet the ever-changing needs of the market.”