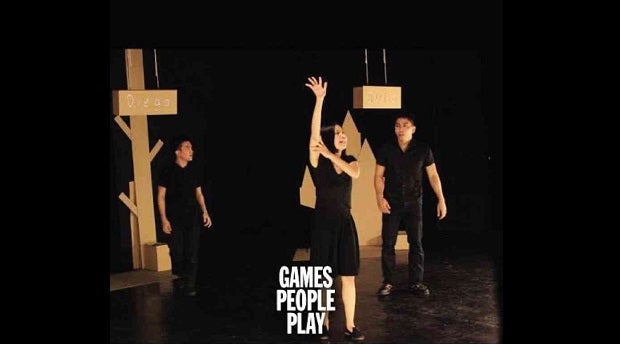 “Games People Play” is a Palanca-winning play by Glenn Sevilla Mas. It is tempting to think that the play is autobiographical in some form. But whether the playwright drew heavily from his own memories or not is irrelevant. What he has done is create a work that is gripping, relevant, immediate, and ultimately relatable to any one, regardless of their childhood memories.

And in the skillful hands of director and stage designer Ed Lacson Jr., cast members Abner Delina Jr., Thea Yrastorza and Kalil Almonte, “Games People Play,” which recently had a brief sold-out run at Ateneo’s Fine Arts Blackbox Theater, proved to be a powerful theatrical experience that relied as much on memory as on imagination.

The play unfolded like a children’s book, but it goes into the darker areas of fairy tales. This coming-of-age story is a well-trodden path, but it was the execution that cast a spell on you.

It followed three friends from childhood all the way to young adulthood: the innocent/virtuous Luna (Thea), the alpha-male/brave Diego (Almonte), and the timid/beautiful Julio (Delina). In the course of several years (divided into acts), the three friends learned more about themselves and each other as the games they played among themselves evolved into darker stuff. Growth would happen in painful, traumatic ways. (Then again, we remember more the painful stuff than the pleasant ones.)

The three actors successfully navigated the aging of their characters. They did well in their monologues, but it was in their ensemble work where I felt they really excelled. I especially loved their awkward starts and stops in the scene where the three friends meet again after more than a decade. It was painful and hilarious to watch.

As it is with children’s tales, a lot of things were left unsaid, and much of the play was left to the imagination. The production design was deceptively simple: flat, graphic trees and cardboard castles. But because the sets were mere representations, they invited the audience to fill in the gaps themselves.

The costumes were basic black. The same three actors skillfully brought to life several supporting characters using only the simplest of props and a shift in movement and voice. Even the original music by Teresa Barrozo was minimal yet evocative.

Yet it was within those in-betweens—the pauses between words, the silence between notes, the stillness between actions—that the power of the play manifested itself.

The thunderous applause of the audience at the end of the play was, in effect, a necessary release. It’s a relief to go back to the real world after being immersed in the dark fairy tale of Luna, Diego and Julio.

Tales of lost friendships and loss of innocence are nothing new. But “Games People Play” is proof that inventive storytelling can spell the difference.