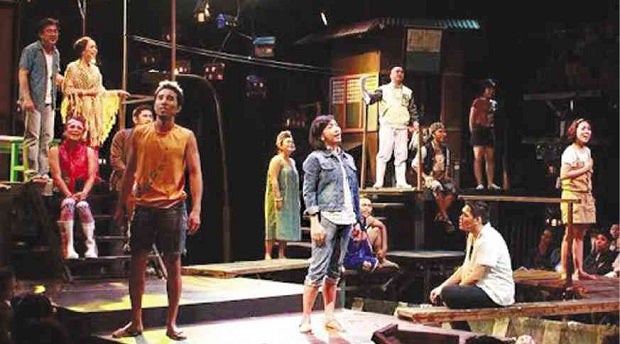 SCENE from “Rak of Aegis,” written by Liza Magtoto and directed by Maribel Legarda. JEFF HERNANDEZ

There’s no need for a Tolstoy, a Wilde or even a Hendrix quote to prove music’s ability to swallow a person whole.

The Philippine Educational Theater Association’s (Peta) latest offering, “Rak of Aegis,” for instance, was more than enough to do the job.

In the resulting production, there was no shortage of vocal prowess in the lead performances of Aicelle Santos, Robert Seña and Isay Alvarez. Set in flooded barangay “Villa Venizia,” the story revolves around Santos’ character Aileen’s struggles to balance familial duty and her dreams of personal success, further complicated when she gets entangled in love.

Romance is an essential thematic cog in the “Rak” machine, and it was an effective launching pad for the cast to deliver an appealing, convincing and engaging soundscape of reimagined Aegis melodies. Santos flashed her brilliance from the get-go and never let up. What was surprising was how she was able to sustain her high level of momentum and vocal firepower right up to the show’s tail end, even with a seemingly stretched Act 1.

Seña, who played Aileen’s father, sang “Luha” a couple of octaves down, while appearing to tap his inner Bruce Springsteen/Billy Joel to aid in his singing. Meanwhile, Alvarez, tasked to play the part of the barangay kapitana, also tackled her vocal assignments several keys lower than the original song arrangements; but that didn’t get in the way of transmitting her character’s emotions.

The song rearrangements, done by musical director Myke Salomon, proved to be compelling. Aegis’ hits—“Halik,” “Luha,” “Basang-basa sa Ulan,” “Christmas Bonus,” to name a few—were tweaked octave-wise to suit the story’s turns, dips and leaps. A total of 20 Aegis songs were utilized in “Rak of Aegis,” though some in markedly truncated versions.

A good validation of Salomon’s work was the humorous and, at the same time, sensual showcase of Jerald Napoles’ thespian talent as Tolits. His charming portrayal of the boatman secretly in love with Aileen blended well with her warm innocence and naiveté; their bubble-draped duet in the first act was a riot.

The same could be said of the chameleonic turn of Ron Alfonso, who played a gay shoe designer. His brightest moment saw him juggling soprano and baritone voices on the song “Sinta.”

The musical spanned more than two hours. Some songs were repeated and reused throughout the show, which partly rendered “Rak” dragging and bloated.

Among the misses were the seemingly incomplete set layout (despite the visual augmentations) and the not-so-sharp lighting. There were also a few moments when the venue acoustics weren’t able to cope with the actors’ singing.

But they hardly made a dent in the overall experience of a show that encompassed social criticism, witty pickup lines and pop-culture references and, most importantly, highlighted the virtue of Filipino resiliency in the face of disaster. Plus, of course, the splendid singing; “Rak” easily liberated itself from those tiny shortcomings with an ethereal vocal collective that, yep, swallowed the crowd whole. “Sintamis ng wine,” indeed.