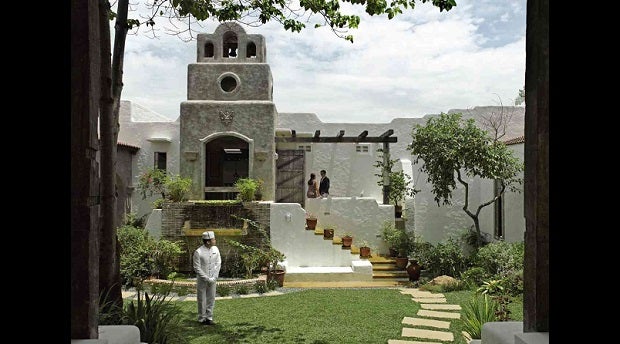 ART IN THE HILLS Enjoy nature and paintings at Pinto Museum in Antipolo. PHOTO BY PACO GUERRERO

Sun, sea, sand and spa are major inducements on most luxury travel itineraries in the Philippines. But for some affluent travelers, having an educational experience is the most desirable memento. Instead of exploring a city with a map, they would rather get as much cultural, culinary and lifestyle immersions as they can, done in high style.

The Peninsula Group is reviving the Peninsula Academy, an assortment of bespoke programs which provide hotel guests with enlightening journeys to important destinations, entry to private studios of artists, and other activities that are unique to that place. They’re all distinguished by Peninsula’s signature elegance accompanied with private helicopter and chauffeured limousine service, the Pen’s page, champagne and refreshments.

The traditionally indulgent nature of luxury travel is toned down to an educational element, partly driven by a demographic shift. Baby boomers and Gen X’ers are well-traveled, better informed and more cosmopolitan than their parents. Weary of the standard vacation, they’re willing to pay the price for an experiential tour.

“It’s about being nestled in a destination and as part of the community, we’ve embraced what are unique—the culture, arts, tourism and fashion,” says Sonia Vodusek, Peninsula Manila’s general manager. “We promote these in the hotel and our other hotels worldwide. The Peninsula Academy is offered to resident guests who want to experience our programs.”

Guests take a yacht to have dinner at an exclusive island bay in Hong Kong; ride the rickshaw across the heritage Hotung neighborhood in Beijing; get an insider’s view of Broadway productions; embark on a river tour of Chicago’s skyscrapers; ride an elephant in Hua Hin Hills in Thailand; learn how to look glamorous for the red carpet in Beverly Hills; get an introduction to Chinese opera in Shanghai; or learn the art of kimono in Tokyo.

At P300,000 the “Spirit of Corregidor: World War I” tour is not only the priciest but also the most popular at the Peninsula Manila. Aside from the bragging rights in undertaking the trips (“I beat the traffic by taking the chopper”), Peninsula Academy presents firsthand education that can’t be learned from a guidebook or a travel site.

“We fly the guests on a private helicopter from our helipad,” says Mariano Garchitorena, Peninsula Manila’s director for public relations. When you go to Corregidor, you’ll have a tranvia (tram) and a private guide, canapés  and champagne at the Mile Long Barracks. Then you fly over the Cavite-Batangas coastline, Taal Lake, and land at Antonio’s for a private meal. You’ll fly back to Manila with memories to last you a lifetime.”

A heritage tour of Taal, Batangas, is the second most popular. Designer Lito Perez fixes up a 1920s-style meal at Villa Tortuga, a 19th-century home that was converted into a bed-and-breakfast place. Guests visit famous churches such as the Basilica of St. Martin de Tours, and have merienda at Casa Villavicencio, which was once the meeting place of Katipuneros.

Garchitorena says a visit to an artists’ compound in Pasay is always a surefire hit with the foreign press. Over cocktails, they learn about Philippine modern art at Avellana Gallery; share a Kapampangan meal at Eric Paras’ A11 furniture showroom, with Paras himself preparing some dishes, and aperitifs at couturier Jojie Lloren’s atelier. The latter’s clothes are displayed on the mannequins.

A lecture on old churches and Fort Santiago can be boring. But when there’s a guide like Greg Dorris (who’s also a researcher), a Pen page boy, and a well-stocked limousine, the Intramuros tour can be entertaining as informative. The program can be tailor-made to suit the guest’s interest. For instance, cultural historian Sonny Tinio can be tapped to talk about colonial architecture and the ilustrado lifestyle. Lunch or dinner are set against an Art Deco mansion.

Crafts and culinary elements such as making dimsum in Hong Kong, wine-tasting in Malibu, visiting a sake brewery in Japan, and brushing up with calligraphy in Beijing are other options.

At The Peninsula Manila, classes on  taka, the iconic paper -mache animals from Laguna, and halo-halo-making are designed for children, the hotel’s future clients.

“When people come here, they see that we are not just beds, coffee and cold orange juice; but that we are a hotel with substance,” says Vodusek.

She credits Garchitorena for designing the tours. His motivation is his longtime friendship with artists and institutions.  Jewelry designer Wynn Wynn Ong has allowed access to her private atelier; guests can have an exclusive preview of modern art at the Pinto Museum in Antipolo.

“We are continually looking for inspiration on how we can best promote the Philippines for the luxury traveler. We are showing the destinations in a way that’s never been seen before,” says Vodusek.

Meanwhile, the Peninsula Manila recently premiered its 45-minute documentary, “Tradition Well Served,” which is shown in all the guestrooms.  Produced by Elaine Forsgate Marden, scion of one of Hong Kong’s old families, it shows archive materials of history and cultural traditions interspersed with modern footages from all the nine Peninsula hotels.

“I’ve traveled all over the world and stayed in many hotels. What makes the Peninsula different is the tradition, the way they do things and treat their guests,” says Marden.

She grew up with the Kadoories, the owners of the Peninsula Group. The chair, Michael Kadoorie, is shown in the film actively participating in the decor of a suite.

“The underlying thing about the Peninsula is tradition,” says Marden. “The tradition of service has been fairly renowned in Peninsula. It’s the combination of Eastern hospitality meeting Western standards, started by the uncle of Sir Michael Kadoorie. Horace Kadoorie and his brother Lawrence had this marvelous way with people. Their own hospitality was part of the family legacy that has been continued onto the hotel.”

The documentary relates the beginnings when Iraqi Jews, Ellis and Elly (Michael’s grandfather) Kadoorie, migrated to China in the late 19th century. They established their empire, among them Hong Kong and Shanghai hotels, Hong Kong’s oldest officially-registered company in 1923.

In 1928 Peninsula opened in Kowloon, then a squalid area across Hong Kong Harbour. The hotel became a game changer when it was patronized by the crème de la crème.

The stories of each property are made compelling by the history. There’s a 1950s footage of the Oscars with William Holden handing out the trophy to Grace Kelly; then the scene segues to actress Stephanie Powers being interviewed by the poolside at Peninsula Beverly Hills. It shows the transformation of heritage hotels in New York and Paris into Peninsula properties; prewar footages of parties in Shanghai wax nostalgia.

Globalization is portrayed in scenes with Chinese staffers and students being trained on Western hospitality at the Peninsula Beijing.

“Some hotels were new buildings. We looked for local traditions which the hotels made their own,” says director Libby Halliday Palin, formerly from the BBC.

In springtime, the staff of Peninsula Tokyo dress up the lobby with cherry blossoms in time for its national festival; the Bangkok staffers secretly prepare the loy krathong boats for the fluvial festival. The footage of President Manuel Quezon saying, “Welcome to the Philippines!” upon the arrival of a Clipper plane, marks the Manila section.

Since music is central to Filipinos, the documentary highlights the annual Concert at the Pen. Hotel pioneers former general manager Felix Bieger, former social directress Mila Valuenzuela and former public relations director Rosary Ysmael recalled how it became a tradition. In the early 1980s, the orchestra was set to play at the Ayala Center if not for the rain. Then Peninsula Manila chair P.L. Lim called Bieger to arrange the concert at the hotel. The general manager then met with Valenzuela and Ysmael to plan the execution.

Palin says she didn’t include footages of the deaf-mute ladies in the chocolate room who have been working at Peninsula Manila for 20 years. “They work so seamlessly together. That’s the same character and passion wherever you go,” she says.

Likewise, in all the Pen properties, she is greeted with the same warmth and enthusiasm, brought about by the hands-on touch of the Kadoories. “Even as a guest, I feel part of the family.”

(Paco Guerrero’s photographs on the Peninsula Academy are on view at The Lobby until March 24.)