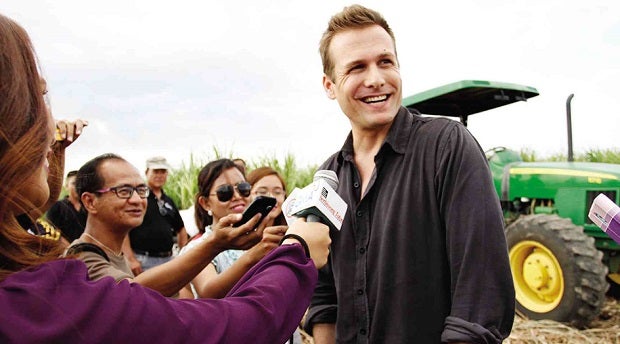 Suiting up for Pinoys

Harvey Specter sits across us, nattily dressed as ever in a gray suit and a crisp white shirt, his hair neatly in place. His trademark predatory expression is nowhere to be seen; in its place is a warm smile and twinkling eyes. Of course, Harvey lives only in the make-believe world of “Suits,” and the man facing us, who plays Harvey Specter to perfection, is actor Gabriel Macht.

Gabriel was in the Philippines last weekend as part of Globe Telecom’s “Project Wonderful” campaign, a nation-building initiative that seeks to rebuild the lives of Supertyphoon “Yolanda” survivors by providing them with livelihood.

Said Gabriel: “I was compelled once I saw the devastation, and I thought if I could be a voice that could bring awareness, I’m gonna come out here.”

The 42-year-old Gabriel spent his weekend with a visit to Ormoc, Leyte, where he helped one of Globe’s recipients of a livelihood package put up her store signage. It was Gabriel’s first time to see a sari-sari store. He was reportedly astounded when he found out how cheap mobile phone prepaid credits could be had here.

“We want to help the areas devastated by the typhoon to get back on their feet,” said Issa Cabreira, head of prepaid business at Globe.

Why Gabriel was chosen for the cause, she explained: “He is a strong advocate of socio-civic work. He has a big following here, and we wanted to partner with a Hollywood star with a strong leaning towards humanitarian work.”

Super talked to Gabriel to ask him about playing an “almost perfect” character, why someone could be in danger on “Suits,” his favorite Tagalog word, and why he thinks helping others is necessary.

Is that suit you’re wearing from the wardrobe department of “Suits”?

Not the suit, but these shoes are! (Laughs)

Tell us about your Ormoc trip.

It was amazing. We took a plane to Ormoc and were welcomed by [4th District of Leyte Rep.] Lucy Torres-Gomez; she took us for a tour around the city, took us to a sari-sari store. I was able to help put up the sign, and it was great to see Globe Telecom supporting small businesses, inspiring them with entrepreneurship for themselves. The people in the township were beautiful … maganda, right? The kids’ faces were so sweet, their smiles, their innocence just touched my heart.

We went to the sugarcane fields and had sugarcane juice, which was awesome, and some traditional food. I had an incredible day, and to see the spirit of the Filipino people, their strength, was very inspiring.

How did you hook up with Globe and “Project Wonderful”?

I was asked to partner with them and raise awareness in nation-building, culture-building and brand-building. I thought this was a really solid vision and I just wanted to be a part of it. I hope to do more work with them in the future. It’s an organization that’s not just throwing money at the problem, but inspiring people to create a life for themselves as well through small businesses.

You’re very active with other charities and advocacies. What life experiences got you interested to give back?

I think it’s a natural instinct for all of us to help out along the way and give back. My grandmother had Parkinson’s disease, so I’ve been involved with a Parkinson’s resource organization— helping people deal with and manage Parkinson’s.

Habitat for Humanity is an incredible organization that helps build homes for people. I’ve seen destruction with the fires in Australia and the floods; we’ve also helped out with Red Cross and Unicef, and I see if I can help out in any way I can.

Patrick Adams was here last year. Did he tell you anything about how his trip?

Who’s Patrick Adams? Oh, is he on “Suits,” too? (Laughs) Patrick said it was crazy, the amount of fame was just insane and I could see it, too. People here really are huge fans of the show; we’re grateful to them. He said he loves this place and I found the avenue to come, that’s why I’m here.

Patrick told us that before the whole thing started, you guys sat down together and said no one’s gonna be a diva, and that you have grown as close as brothers. Do you feel the same?

Absolutely. We’re a lot more similar—he’s more like his character, and I would say I’m probably a little bit more like Mike, too, in some ways. I’m the polar opposite of Harvey.

When we sat down together, we had a really great conversation—we talked about ego. We said if we’re gonna be driving this ship for a few years, if we’re lucky enough to continue with the storytelling, we have to make it a playful, supportive atmosphere, and hopefully that will splinter out along with the rest of the cast and the crew. And we have created a nice bounce rhythm, a place where, if it doesn’t work, we’ll say to each other, we found good harmony.

The show’s gotten so big. Do you ever get called “Harvey” while you’re out?

Given that you play a lawyer, you’re exposed to a lot of legalese. Has this made you confident in giving out legal advice?

Zero confidence in giving any sort of advice or being a model to anyone. I’m able to figure out the legalese—there is a learning curve to it all because it’s difficult stuff. We’re learning eight to 10 pages a day, and then have to make it look and sound like you know what you’re talking about. But if it was the real world, I would try and find somebody as close as possible to Harvey Specter to represent me.

What do you love most about playing Harvey?

I’ve been meditating on narcissism; I’m not a fan of narcissism, I don’t think it’s cool, it’s not something I aspire to. But when you’re dealing with a television character, I think it’s amazing—a narcissist could be potentially very charming, charismatic, kind of a prick but with a heart, so that’s a lot of fun to play.

Harvey is whip-smart and cocky; he can be a real pain in the ass, very judgmental but he’s also verbally ambidextrous, he’s firing from both sides of his brain, so it’s a pleasure to play him. He’s almost like the perfect character to play, it’s a lot of fun.

Having done film and TV, how different are the challenges that you experience on either medium?

In film, you have a finite period of time working on the project; you have more of an arc, so there’s more of a beginning, a middle and an end and you see more of a change with the characters. In television, that change has to happen over a season or maybe even two. That was new to me.

Because I’ve been working in film for most of my career, it was a real shift when I came to  television. As far as being on television now, what’s great about it is that a lot of the great writers have been moving to television; so the material is smarter, deeper and more inspiring.

To be able to play a character week in and week out is more three-dimensional which has been challenging in many ways, because you don’t want to repeat your moments every week. But you do have to understand that it is a series, and a series is a repeat of a similar idea that becomes challenging.

Louis is on to Mike; what’s going to happen next on the show?

Someone’s life is at stake and we’re gonna see how everyone bands around to see this guy through. Is it a guy … or is it a girl? There’s a lot going on at Pearson Specter. Obviously my name is up on the wall now, so that’s a good thing. Louis is on to Mike, we’re gonna deal with that element in a very dynamic way. We’re also gonna deal with Mike’s idea that there’s only a glass ceiling here, how far are you gonna go? And he’s gonna decide if he wants to stay at Pearson Specter, or if he wants to go elsewhere, and there are some really good challenges along the way.

What would be the biggest takeaway from your trip here?

First off, I learned that the strength of the Filipino people is paramount. A large number of people have been affected by  “Yolanda,” and the idea that they can rebuild, create jobs, and get back on their feet is very inspiring to me. I still feel that more awareness needs to come here, but I find that Globe Telecom has been an incredible partner in allowing me to raise awareness about what they’re doing as well, which is nation-building and culture-building. I support their vision in helping entrepreneurship and I think they’re doing great work.

The people of the Philippines are a strong and diverse community— there’s every opportunity to rebuild, and again, I just say hang in there, it’s around the corner that you’re going to get back on your feet.