Back in BGC | Lifestyle.INQ ❮ ❯ 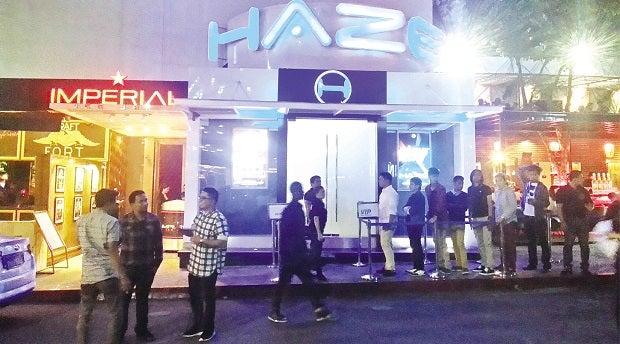 It is 10 p.m. on a Saturday, and The Fort Strip in Bonifacio Global City (BGC) is teeming with young people. They own the night, these kids with money to burn and whose idea of a good time starts around midnight.

Groups of friends gather outside Aracama, the “Filipino cuisine” restaurant of chef Fernando Aracama that has a bar upstairs. There is no entrance fee to the bar, which is still deserted as the DJ plays some mid-tempo music.

We bump into Tim Yap, one of Aracama’s business partners. He puts on his PR skills, asking if we’ve had dinner. But we’re here to feel the vibe of the crowd, which unfortunately takes a long time to go up the bar.

And so we decide to walk a few steps over to Club Haze, which is owned by Bigfish, the group of dance concert promoters. There is a line of kids waiting to enter the club, which charges P600 per head.

Our friend is hungry and wants to have a late-dinner first. We leave The Fort Strip and proceed to McKinley Hill, whose Venice Piazza has rows of restaurants. We enter Little Asia, whose owner, Charlemagne Lim, has been badgering us for the past few years to try out his place.

The menu is quite extensive; we order boneless chicken teriyaki and Japanese tofu steak. The sauce in the chicken is a bit too thick, but we devour everything anyway. The tofu tastes fine.

Walking by the McKinley Hill area feels like we’re in Singapore—spotlessly clean roads, motorists obeying traffic rules, security guards looking smart and courteous. We linger and check out Planet Grapes (G/F Bldg. 3 Tuscany at Mckinley Hill, Upper Mckinley Road), a newly opened wine bar. One of its attentive waiters, Jason Moyo, demonstrates his knowledge of wines by enumerating and explaining the varieties that we should try.

We tell him we prefer red that’s not too dry; he suggests Spy Valley Pinot Noir 2011 from New Zealand, whose light fruit flavor goes well with the chicken fillet and siomai that we also order. The soft piano jazz record playing in the background completes the relaxing ambiance.

We feel so good that we stay until 1 a.m.

The following Wednesday night we are back in BGC, determined to return to Club Haze and find out why the kids are lining up at the place.

It’s Ladies’ Night, which at Club Haze is dubbed Kandilicous Wednesdays; women can enter for free while men pay P500, says a bouncer from the Red Knights group, which we notice also provides security for Aracama, as well as most of the concerts at Smart Araneta Coliseum and SM Mall of Asia Arena.

We are about to pay the fee when George Gabales, a DJ and audiophile, and also our grade school batch mate in Colegio San Agustin, comes out the door, recognizes our face and invites us inside. Turns out he works at Club Haze as technical director, which means he handles the sound system.

That means a lot, because the sound quality of a dance club like Haze is all that matters especially to those who get bothered when the mix or audio level of the music becomes unpleasant to the ears.

The kids may not notice it, but at Haze you can converse with your companions without having to shout at each other’s ears. It’s not like that in other dance clubs.

The tunes that DJ Ian Sndrz plays that night, while basically EDM, sound vibrant and refreshing: DJ Meme’s mix of “Chanson Du Soleil (Sun Is Coming Out)”; Deadmou5’s “After Hours”; a surprising remix of Esther Phillips’ “And I Love Him” (yes, from The Beatles original “And I Love Her”).

Beer is a bit pricey—San Miguel Light is P100, but that’s all right because the vibe is cool enough for us to enjoy drinking at a slow pace. And so we realize that we like Club Haze for the aforementioned reasons— and not just because George is kind enough to treat us to good-tasting parmesan buffalo chicken lollipop.

The club’s name itself is a magnet for those who know the Jimi Hendrix song.

For those going to The Fort Strip for the first time, the area boasts other gimik places that cater to folks of various persuasions: Privé for sosyalan drinking with celebrity friends; Draft for high-end beer and food; Scarlet for wine lovers; Craft for live rock gigs including “rockaoke” nights; Jill’s for retro acoustic shows and ’80s music featuring DJ Jon Tupaz on Fridays.

But beware of snatchers if you stray into the Burgos Circle, and the area between 3rd Avenue and 31st Street, specifically Shi Lin restaurant. Online sites have documented scoundrels operating in Burgos Circle; and a good friend of ours, United States resident Rhoneil Sto. Tomas, was victimized by a group of thugs right inside Shi Lin a few weeks ago. He lost his bag containing a MacBook Air, his US passport, and $3,000.

We wonder what BGC management is doing about these incidents.