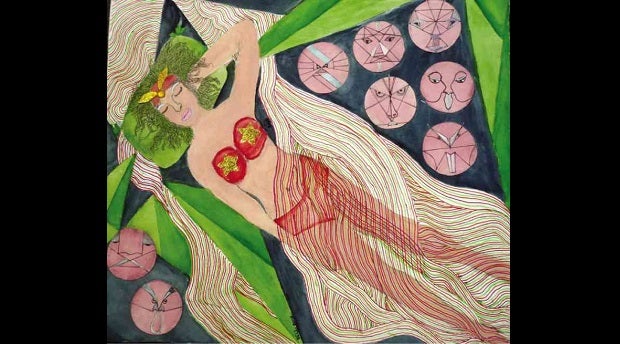 How they awed us: in Eden, Adam and Eve, sitting among the animals; Abraham with knife upraised, about to sacrifice his son Isaac to prove his loyalty to God; and Noah, leading pairs of every type of animal into the Ark. (We never questioned how families and animals in such quantity, not including the food they were to consume for 40 days, could be accommodated without sinking and stinking the Ark.)

I recently decided to reread my Bible, hoping to get bored and remedy my insomnia. Instead it kept me wide awake! Moses, if, indeed, he had written Genesis, was a great storyteller.

My favorite tale is that of Esau and Jacob, twin sons of Isaac and his wife Rebekah. First to come out of the womb was Esau, whose whole body was like a hairy garment. Soon after, Jacob appeared, hand grasping Esau’s heel.

When the boys grew up, Esau became a skillful hunter, while Jacob “stayed close to the tents.” Isaac, who had a taste for wild game, loved Esau, but Rebekah loved Jacob.

Once, when Jacob was cooking lentil stew, Esau came in from the hunt, famished. “Quick, let me have some of that stew,” he cried, “I am famished!”

“Look, I am about to die!” Esau replied. “What good will that birthright be to me?”

But Jacob insisted, “Swear to me first.” So Esau swore an oath selling his birthright to Jacob. For a dish of lentil stew.

I think Rebekah is a terrible mother with an almost clinical case of favoritism. When her husband, Isaac, was very old and could no longer see, he called his first born, Esau: “My son, catch me some wild game and prepare it the tasty way I like. Then bring it to me to eat so that I may give you my blessing.”

Now Rebekah was listening as Isaac spoke. Immediately she told her son, Jacob, everything she had overheard. She asked Jacob to go out to their flock and bring her two choice young goats. “I will prepare them the tasty way your father likes, then you must take the dish to him to eat so he can give you his blessing,” she said.

“But my brother Esau is hairy and I have smooth skin,” Jacob objected. “What if my father touches me? He will know I am tricking him and that would bring a curse rather than a blessing on me.”

“Let the curse fall on me,” said Rebekah. “Just do what I say.” So Jacob got the choice goats and Rebekah cooked them as she would wild deer.

She then took the best clothes of Esau and put them on Jacob. She covered his hands and the smooth part of his neck with the goat skins. Rebekah then sent Jacob with the cooked goat and the bread she had baked to his father.

Upon being approached, Isaac asked, “Who is it?”

Jacob said, “I am Esau, your firstborn. I have done what you have told me, caught game and cooked it the tasty way you want. So please sit up and eat it so you can give me your blessing.”

When Isaac asked how did he catch game so quickly, Jacob replied: “The Lord helped me.”

“Come nearer so I can touch you,” his father told Jacob. Isaac touched him and said, “The voice is that of Jacob but the hands are of Esau. Are you really my son Esau?”

“Come here and kiss me then,” his father said. Isaac caught the smell of Esau’s clothes and was convinced. He gave Jacob the blessing: abundance of grain and crops and the nations will bow to you and you will be lord over your brothers.

Soon after the blessing and just after Jacob left, Esau came in, having prepared tasty game that he had hunted for Isaac. “Sit up and eat, my father,” he said, “so you may give me your blessing.”

“Who are you?” Isaac asked.

“Father, I am your firstborn,” Esau said.

Isaac trembled violently. “Who was it that said he hunted game and brought it to me just before you came?” he asked in panic. “I blessed him.”

Esau broke out into a loud and bitter cry. “Bless me, too, my father,” he pleaded.

Isaac said, “But your brother already came and deceitfully took your blessing.” (Note: Apparently, blessings, like curses, once given, are irrevocable).

“Jacob has deceived me two times!” Esau wept wildly. “First he took my birthright (the traditional law’s right of the firstborn to the inheritance) and now he has stolen my blessing!”

Esau held a deep grudge against his brother for a long time. He even swore that after his old father died, he would kill Jacob.

When Rebekah was told what her older son had in mind, she instructed Jacob to flee at once to her brother Laban in Haran: “Stay there until Esau’s fury subsides. When your brother is no longer angry I’ll send for you to come back.”

I used to think people in the Bible were there for us readers to emulate or to serve as object lessons. But Jacob, who was always shrewd, was never divinely punished. He prospered, and multiplied and became an important figure in Egypt.

Jacob’s name was changed to Israel and he led the Israelites to the Promised Land. (To this day the land they claimed is still a subject of dispute.)

So I guess the Bible is still just history of foibles and misery and troubles and victories. People in it are only people, some growing rich by bilking others and begetting power, some deprived of their rightful share and living lesser lives. Some are not loved by their mothers and some are mama’s boys. Just like our world today.