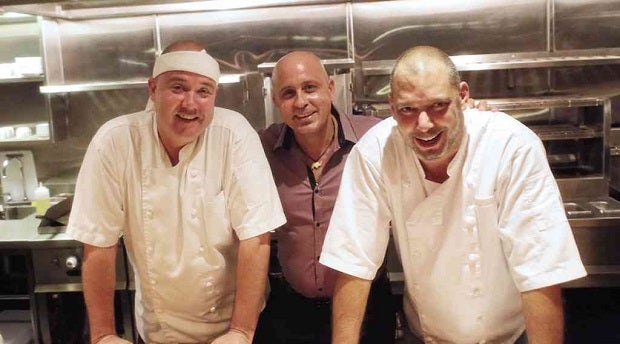 And now, a Lebanese resto in Cebu

THE ABACÁ Group’s chef-owner Jason Hyatt is a man who needs no introduction in Cebu.

With his wide range of restaurants offering different global cuisines—the Californian-Mediterranean Abacá Restaurant, Maya Mexican Restaurant and Tequila Lounge, favorite brunch hangout A Café, the Italian trattoria-inspired Tavolata and the Vietnamese kitchen Phat Pho—he has built not only a cult following of local food fans, but has also made his restaurant empire a must-try destination for travelers.

Our friends who visit Cebu always ask what’s new with the Abacá Group, because they are excited to check out the latest thing the owner has cooked up, and they, like us, are always surprised with the choice of cuisine.

Jason’s most recent baby is a Lebanese resto, Beqaá, on the second floor of the Design Center of Cebu, just above Tavolata. Featuring hardwood floors, dim, sexy lighting and wrought-iron features for a contemporary touch, Beqaá is named after the most lush and fertile valley of Lebanon that feeds half of the Middle East.

The restaurant marries contemporary Middle Eastern cooking and traditional flavors, with a menu that features a wide array of clean, healthy, and tasty mezze and main dishes.

Vegetarians who have always lamented the lack of options in town will find Beqaá attuned to their needs as it boasts a satisfying selection of over 15 purely veggie dishes.

Meat lovers, meanwhile, won’t get enough of their generously portioned kebabs, of which no Middle Eastern menu is complete without it.

Gap in the market

Like many of The Abaca Group’s ventures, Beqaá came about to fulfill a lack. “We felt there was a gap in the market for a contemporary Middle Eastern restaurant, and we chose Lebanese because we feel that it best represents true Middle Eastern cuisine,” says Jason.

Managing Beqaá is Australian-Lebanese Mark Salem, who moved to Cebu six months ago to run the day-to-day operations of the chic 75-seater resto and teach diners the proper way to enjoy the dishes offered, to better understand what Lebanese cuisine is about.

No stranger to the restaurant industry, he comes from a family of restaurants and nightclub owners in Australia. “My family has been in this industry for more than 40 years. I basically grew up in it, from sitting on my dad’s knees and watching him push some numbers to sitting behind the bar on a stack of beer cartons watching people have a great time as the night progressed,” Mark recalls.

“My father officially brought me into the business at  age  21, and after a lot of on-the-job training, I became the nervous but proud manager and partner of my first restaurant, a 120-seater space called Lotus Palace. That meant 15-hour days from 9 a.m. to, more often than not, 4 a.m., seven days a week. That was back in 1989, and I have been either directly or indirectly associated with the hospitality industry since.”

The affable Gold Coast native has also had a wide assortment of jobs, ranging from private investigating to aircraft maintenance, and even worked as a stock hand on a cattle farm, mustering, branding and dehorning cattle.

“I first met Jason through Wade (Watson, executive chef of The Abacá Group) about five years ago,” says Mark. “Wade has been my best friend for more than 20 years; in fact we worked together in my first restaurant, Lotus Palace. We’ve always stayed in touch throughout his work adventures overseas, and he asked me to visit him when he first moved to Cebu to work for Jason.”

While visiting Cebu, Mark says he couldn’t get enough of its beautiful beaches. “So when Jason told me he was opening a Lebanese restaurant and asked me if I would be interested in helping out, I thought it was a complete no-brainer. I love Cebu, I know Lebanese food, and I think Jason is brilliant at what he does, so here I am!

Mark says he wanted to create “a genuine Lebanese restaurant with food that would be eaten on the tables of Lebanese families wherever they may be in the world. And no one knows Lebanese home-style cooking more than a Lebanese mom.” So he got his mother, Hana, a chef in Australia, to show The Abacá Group chefs the secrets of home-style Lebanese cooking.

“Let me make it clear, though, that authentic Lebanese cooking can be found only in Lebanon, just like authentic Filipino food can be found only in the Philippines. But we have managed to put together a wonderful menu of Lebanese delights that I happily eat everyday. And surprisingly, I have had quite a few Lebanese customers in Beqaá tell me that the food is just like what their own mothers make,” he says.

“This makes me exceptionally proud of the quality of chefs we have here and their ability to adopt new concepts and make them work. I’d even go so far as to say that Beqaá is the restaurant my father always wishes he had,” he adds.

Lebanese food is meant to be shared, and although Mark says that there are just too many wonderful dishes in the menu to have all in one sitting, he recommends having a range of mezzes, including hoummos, baba ghanoush and labneh, strained yogurt, garlic, extra-virgin olive oil and za’atar (a blend of Middle Eastern spices) and the fattoush salad with toasted bread and sumac vinaigrette.

The Beqaá mixed grill, which is a combination platter of grilled meats including beef kebabs, kafta (meatballs), lamb chops, spicy lamb sausage and shish taouk (chicken kebabs), is a bestseller, as is the hearty Lebanese lamb stew with potatoes, onions and pistachio, and the vegetarian dal, lentils stewed with coriander and onion. To wash it all down, Beqaá offers an extensive list of both old and new world wines.

So, what’s next for The Abacá Group? Jason and Mark are mum about it, but the glint in their eyes tells us that they have something new up their culinary sleeves again. All we can say is, keep them coming!