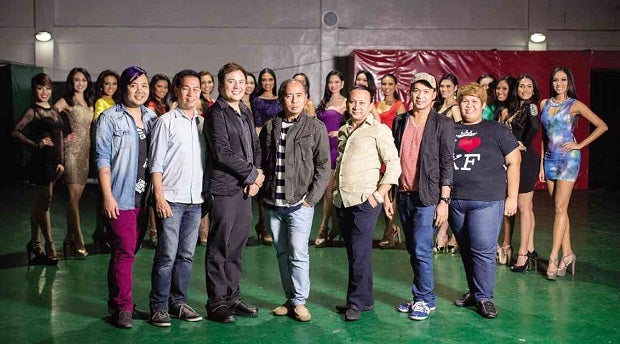 A boot camp for beauty queens? You bet your sweet sequins it exists

While Filipinos the world over waited with bated breath some time last November for Miss Universe hosts Thomas Roberts and Mel B. to announce the five finalists in Moscow, celebrated Filipino beauty queen maker Jonas Gaffud of Aces & Queens was running to the nearest men’s room of the huge Crocus City Hall, the event’s venue.

It was a make-or-break moment for Miss Philippines Ariella Arida, who, thanks to online fan votes, managed earlier to earn a slot in the pageant’s top 16.

But with no fans and Gaffud to help her now, Arida was on her own. And her mentor tried to deal with it by hiding in one of the restroom’s cubicles before singing his lungs out.

“I went to the bathroom and started singing so I wouldn’t hear anything. The stress was too much for me to take,” said Gaffud, aka “Mama J” to his countless beauty queen protégés, which include Venus Raj, Shamcey Supsup, Janine Tugonon and reigning Miss World Megan Young.

Gaffud learned only a bit later that Arida eventually made it to the top five when he started receiving text messages from close friends, including seatmate Tugonon, telling him how happy they were. It was their way of telling him it was now okay for him to go back to his seat.

It has been like this for several years now. Gaffud and his team of “aces” have been credited by fans for putting the Philippines back on the beauty contest map by running a free training camp that helps young, beautiful and ambitious women acquire and develop such basic pageant skills as walking, posing, styling, answering questions, and doing their makeup.

How does it work? Do Gaffud and company earn from such endeavors? How does a beauty queen hopeful apply?

Before Raj broke into the Miss Universe finals in 2010, this beauty-pageant-crazy country went through a long “drought,” as no Filipino beauty queen since Miriam Quiambao in 1999 was able to land even in the contest’s semifinals.

“It never gets any easier,” said Gaffud, a former researcher from the University of the Philippines whose current day job is running Mercator, a talent and modeling agency. “You never get used to the stress. After Megan won last year, I promised myself I’d stop doing it. But I’m still here. I guess it’s really all about passion.”

Arnold Mercado and Mark Besana, who manage the girls, both work for multinational companies. Lawyer Nad Bronce trains them to answer questions, while architect Carlos Buendia, a part-time choreographer, trains aspirants to dance and move onstage.

Makeup artist Albert Kurniawan, an Indonesian, trains aspirants on how to do their faces.

Gold’s Gym’s John Cuay, a veteran fitness professional, takes care of the girls’ fitness and diet. One of his latest “masterpieces” was Arida’s toned physique and washboard abs.

Since Gold’s Gym is the official fitness center of Binibining Pilipinas, he also trains girls from other camps once they win the national competition.

“It’s not just about the body, because we all have different needs and problem areas,” said Cuay. “It’s also about proper nutrition. Since these girls are still young, many of them don’t know how to eat right.”

Local beauty camps like Aces & Queens have been around for more than a decade now. Aside from Aces, one of the biggest, oldest and most successful training camps is Kagandahang Flores (KF).

While Aces & Queens was previously known as Mabuhay Beauties, KF started simply as Rodgil’s Girls. Like Aces, KF doesn’t charge for the management of its girls’ training.

Sometimes Gaffud and Flores end up spending their own money to provide girls from the provinces board and lodging while they’re training in Manila. Generous friends and former protégés donate money occasionally.

They also try to abide by rules set by local contest organizers like Stella Araneta and Cory Quirino once their girls win.

“We try as much as possible to coordinate with them,” said Flores. “Whatever the girl learned before winning in the local pageant needs to be fine-tuned before she is sent abroad. Each international contest has a different set of expectations and requirements.”

Training is done at KF’s spacious camp in Quezon City. Aces has a similar training venue in Pasig. Both spaces are provided for free by their respective supporters.

“If we need mirrors during catwalk exercises, that’s the time we rent a place in Mandaluyong,” said Besana.

Since they’re not the girls’ managers once they become reigning beauty queens, it’s a no-no for Gaffud to bypass the heads of these local contests.

“I don’t have a say on what they do,” he said. “I don’t earn commissions from their endorsements. I will become their manager only if they choose me after their reigns, like what Shamcey and Venus did.”

They’re also bound by the passion to see the girls morph “to become their best” long after their respective pageants are over, said Flores. One of the first things they address is walking.

“A lot of these girls are tall and beautiful, but many of them lack experience when it comes to walking,” said Garrido. “That’s why we train them regardless of what they are asked by the organizers to wear. By the end of the training, they should be able to carry almost any dress with ease.”

Agustin, Wilson and Henry, who affectionately call Flores “Tito Rodgil,” also assist in the girls’ training by inspiring them with stories of their beauty queen days.

Wilson’s husband, engineer and real estate developer Victor Consunji, is also in charge of the KF girls’ fitness and diet. They train in the couple’s private gym in Taguig.

“Kuya Rodgil and I also started out as beauty pageant fans,” said Gio. “Back in the early ’90s, we would go to Cubao whenever Binibining Pilipinas had a screening or parade of beauties. There was a year when we rooted for Ruffa Gutierrez.”

The cousins took their fascination with pageants and beautiful women a step further when Gio, the more intrepid of the two, started approaching potential beauty queens and asking if they wanted to train under them.

“Back then, we trained only two to three girls at a time,” said Flores. “This year, we have 22 girls training for Binibining Pilipinas.”

Gaffud also started out informally. Along the way, he found kindred spirits who shared his passion for beauty contests.

“In 2001, I got to know Zorayda Andam, then a law student, through Nad (Bronce),” he said. “I encouraged her to join Binibini. That started it for me.”

Both camps have become so famous and successful that they no longer seek out girls to train under them. The girls, sometimes through their parents, managers and supporters consisting of local politicians from governors to mayors, now go to them. Some train as early as six months before the pageant’s first screening.

Flores and Gaffud know each other and have had the chance to work together in a number of projects. Since both camps are acknowledged as the country’s biggest and most successful, rivalry between Aces and KF has become inevitable (See related story above).

But both men insist that the supposed rivalry is nothing but a product of their respective fans’ views on social media. They may share the same objective of producing world-class beauty queens, but there are certain differences in the way they approach it.

Gaffud and his team have decided to just focus on two local contests: Binibining Pilipinas and Miss World Philippines.

On the other hand, aside from helping hone candidates for Miss Earth Philippines and the two other leading local pageants, Flores and his collaborators are open to helping aspirants in lesser-known contests.

“It’s really hard to say no, because who are we to stop them from pursuing their dream of becoming a beauty queen?” said Bronce.

They decide as a group, but as leader of Aces & Queens, Gaffud has the last say when it comes to accepting an applicant. Every girl may be unique, but not everyone is cut out to be a beauty queen (See related story at right).

“It really takes too much of our time to train,” Gaffud reasoned. “And now that Miss World Philippines has spun off from Binibining Pilipinas to become a separate pageant, our involvement has become almost year round. If we really feel that the girl doesn’t have it, we tell her. After all, we also have our day jobs to attend to.”

Flores has a harder time saying no. Unless the girls are short (below 5’5”), they’re still welcomed at KF even if they’re perennial losers or, as Gio so animatedly put it, “mukhang itik” (resembling ducks).

By the end of their training, many girls end up surprising not only themselves, but also people within and outside KF with their transformation. Some of these ducks eventually turn into certified swans.

“I always see something in a girl that others probably don’t,” said Flores. “Underneath all that plainness, I see something in her personality. I see the hunger. When I bring that kind of girl to training, my colleagues at KF would always ask me, O, saan mo na naman kinuha ’yan (where did you get her)?”

Even Flores’ mother, who has become exposed to many beauty queens through the years, questioned him once. Soon after the aspirant left their home, she asked her son why he took her in.

And that plain-looking aspirant happened to be Quigaman, the woman who ended the Philippines’ 26-year title drought by winning Miss International in 2005. The last time a Filipino won in a prestigious global beauty tilt was in 1979 when Melanie Marquez brought home the same crown.

“As a trainer, I’m like Tito Rodgil,” said Agustin. “I won’t say to you straight that you’re hopeless.”

But Quigaman had major problems. For instance, Flores and Agustin noticed during actual training that her ribcage was lopsided. It was protruding to one side, which became more obvious when she walked.

“I don’t know if she was born with it or was doing it subconsciously,” said Agustin. “It was crunch time. We had only a few months before Binibining Pilipinas to correct it.”

To Flores’ credit, he never gave up on Quigaman. Had he closed his doors on the wide-eyed hopeful, the Philippines would have been poorer by one international crown.

“Seeing them win is just a bonus,” said Flores. “Seeing them happy, especially girls who had doubts about themselves, is the ultimate high. As long as I can, I will keep on training potential beauty queens. How can I stop when my former protégés have already started lining up their young daughters for me to train one day?”