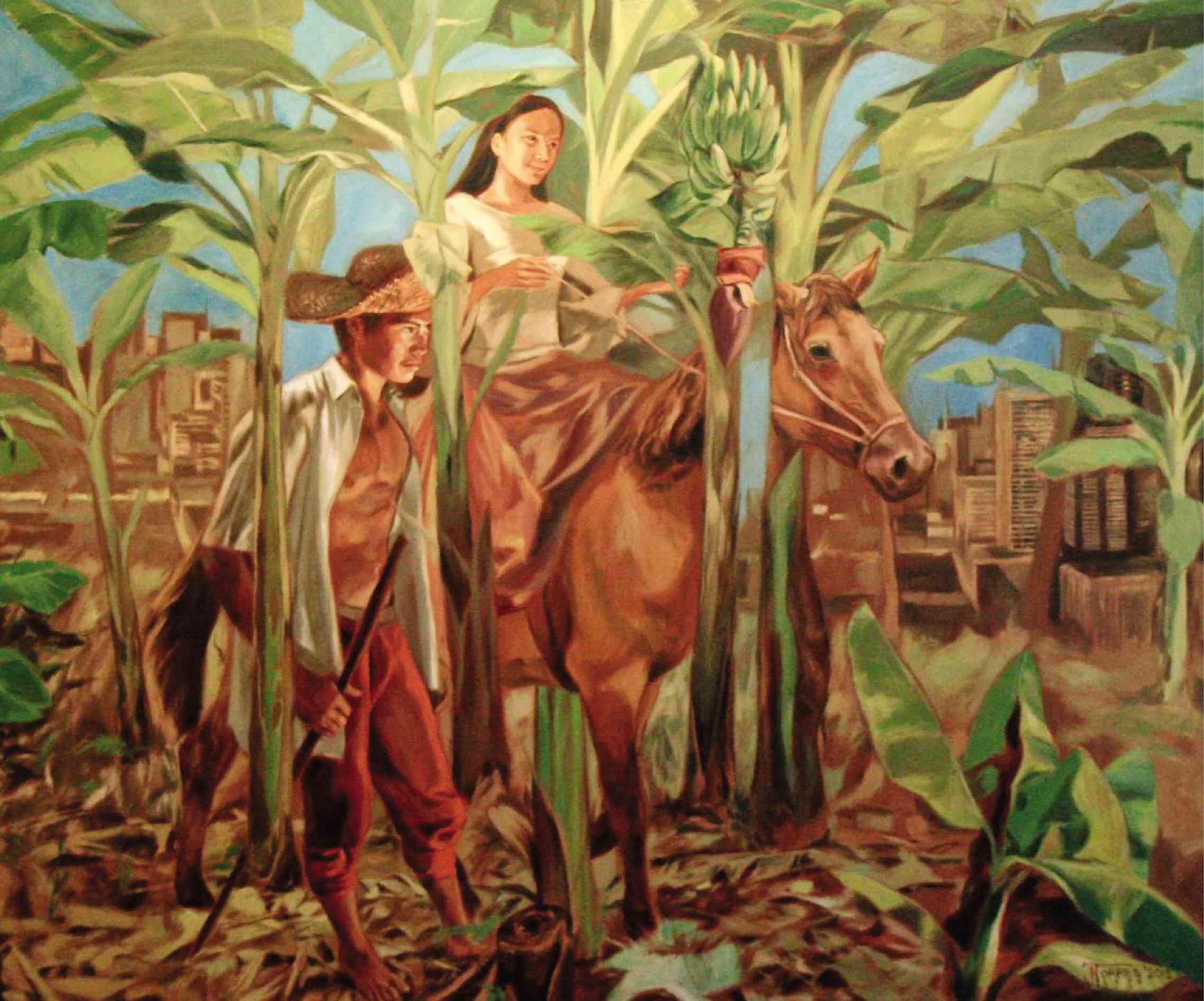 Painter Juanito Torres’ new exhibit at  Canvas Gallery and Garden, “Pride and Illusion,” explores the layered fusion of history, facets and influences that make up the Filipino. This dovetails with Canvas’ spirit since the art space has an annual group exhibit exploring artistic discourses on national identity—“Looking for Juan.”

Torres in the past has gained attention with what has been seen as very Pinoy comedic subjects.

The busy canvases are rendered in the artist’s signature period garb and bright yet muted autumnal colors.

The polar character of Juanito’s muted brights is, indeed, as Pinoy in appearance and flavor as “dirty ice cream” and the perfect medium for beautiful kayumanggi (brown) skin. But in the new series, the amalgam of opposing influences has him looking to Magritte while his subjects are Katipuneros and Philippine patriots and revolutionaries.

Here, Torres emulates the  Belgian’s penchant for making a personal version of a known artwork  as he did by replacing human subjects with coffins for his version  of Manet’s “The Balcony.”

“Virtual Heroes” shows the images Jose Rizal and a Katipunero compartmentalized into surreal panels much like the woman on a horse in Magritte’s “The Blank Cheque.”

Compositions of paintings within a painting is also a Magritte stamp that Torres echoes and fantastically makes his own in “The Kiss,” where a lass steps out of a floor easel-propped canvas that shares a backdrop of plantation field with the bigger picture. She leans toward the Katipunan flag-shrouded pucker of a revolutionary, but with  the artist’s humor, the letters could very well be a goading “kiss, kiss, kiss!”

A tribute to Magritte would not be complete without toasting to “The Son of Man.” With “Eat This,” a bolo-toting farmer with a red apple obscuring his face seems to say that the Filipino is as flawed and can succumb to temptation and, in that sense, is no different from the suited bowler-hat wearer.

The recurring appearances of revolutionary figures and the borrowed concept stacked on top with Torres’ gift of using muted browns to underscore the mellow melding of extremes encapsulates the Filipino’s melting-pot psyche.

His works add Pinoy grit to Magritte such that the blend of Western influence and a continuing rebellion against that very inspiration brings, as Torres paints, pride that is not just illusionary.