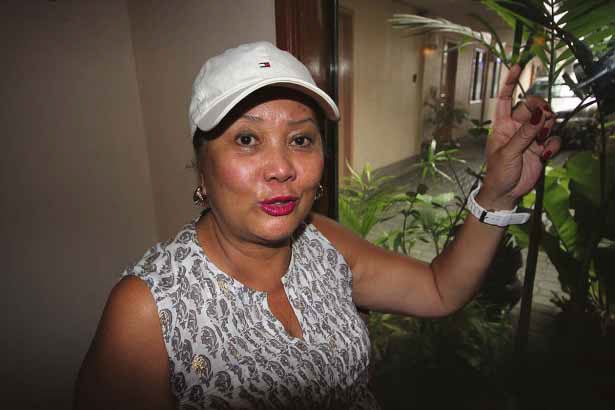 TACLOBAN CITY, Philippines—The whistle-bait, 53.3-centimeter waistline is gone. But Tetta Agustin, the 1.7-meter-tall, dusky international fashion model who ruled Europe’s catwalks in the 1970s, still turns heads when she walks into a room.

That was the case on Saturday morning when Agustin, acknowledged widely as the first Filipino supermodel, walked into the café of the fully booked Hotel Alejandro here where hundreds of foreign relief workers are staying.

In an instant, the retired model and socialite, started shouting, her signature throaty voice drawing the attention of the foreign guests away from their breakfast.

“What are they doing here? Where is the money? Where did they put it?” Agustin fumed.

Agustin is on the warpath. In her sights are the hundreds of international and domestic charity and relief organizations that dot the landscape of this typhoon-ravaged city, their volunteers booking hotels to full capacity, and their brand-new vehicles causing traffic jams.

“They are all over the place, but I have looked around and I see nothing. They are taking advantage of our situation,” she said.

Agustin, who was granted a private audience with Pope John Paul II in 1988 because of her charity work in Europe for children’s causes, said she knew how charities wasted much of the money they raised in sky-high administrative costs that included the fat salaries of their officials.

But an official of one of the international charity groups working in Tacloban was quick to answer Agustin’s charges. He spoke on condition that he not be identified because the spokesperson for his group was in Manila.

“Ms. Agustin’s criticisms are misplaced. Ask the people who benefited from our presence here. Ask the local officials. We did not come here as tourists. We are here to help,” the official said.

Suddenly, the voiceless poor and unwashed survivors of Super Typhoon Yolanda (international name: Haiyan) in this city have found an unlikely ally in Agustin, who, in her heyday, hobnobbed with the world’s rich and famous like Maria Callas and Jackie Kennedy Onassis.

“We are happy that somebody like her is concerned about our condition, because we are still really hurting,” said Bernadette Verallo, a 55-year-old housewife from Barangay 69 in Apitong district, one of the slums Agustin visited.

Agustin said her blood boiled when she was informed that the Leyte Metropolitan Water District cut the water to the mostly poor residents of Barangay 69 and 70 where she visited last week.

The two villages are mostly populated by informal settlers who built their shanties on the coastline facing Cancabato Bay, a no-build zone.

“We have no water, no electricity. They are slowly killing us,” Verallo said.

“What are they doing? Don’t they have a heart?” Agustin asked.

Agustin said she cried when she saw the appalling condition of the survivors who had been forced by the government into cramped bunkhouses after the typhoon.

“Why did [President Aquino] put Lacson in charge? Didn’t he flee once? Isn’t he supposed to be in jail? And Gordon, what has he done here?” Agustin asked. The reference to Lacson pertained to the murders in 2000 of public relations agent Salvador Dacer and his driver Emmanuel Corbito, of which the former senator, who was chief of the Philippine National Police at the time of the killings, was cleared by the Court of Appeals in 2011.

Now in her 60s, Agustin retired in 1982 after living in Europe for 40 years. She returned to the Philippines five years ago, living in her Greenhills mansion six months a year and the other six in Cannes, France, and Brussels, Belgium, where she has homes with her husband, Christian Baverey, a French businessman whom she married in 1992.

Her only child Tosca, 25, is a lawyer in New York, doing postgraduate studies in law.

Tosca’s godfather is the fashion legend Hubert de Givenchy, who Agustin said was the one person in the world who made her famous. Givenchy, who retired in 1995, is now 87.

Agustin, who once turned down a £1.8-million (US$2.8-million; P123-million) offer to write her memoirs, said she had been in Leyte since March 10 to do relief work using her own money to help rebuild damaged churches and school buildings.

“I don’t ask people to give me money for my charities. I do it on my own,” she said.

Agustin is wealthy enough to have a collection of classic Aston Martins and Ferraris.

The unusually media-shy socialite (before this, she gave an interview only once, in 2012, to another newspaper) who once walked fashion runways around the world with the likes of Iman, Lauren Hutton, Jerry Hall and Margaux Hemingway, told this writer that she was outraged at the slow pace of the relief and rehabilitation work in Tacloban, Palo and remote areas like Cabucgayan, Biliran, which she visited on March 14.

Agustin said she was also concerned about the lack of transparency in the relief work of the international charities in Tacloban.

“There’s at least $2 billion promised here. Where’s all this money going? The typhoon victims need to know,” she said.

Where her heart is

Her socialite friends in Manila warned Agustin not to visit this city, Ground Zero of Yolanda’s wrath, but she decided to come anyway.

“I can’t help it. I need to do something, even small things. I want to help and get involved somehow,” she said.

Agustin’s meteoric rise to international fashion stardom in the 1970s is the envy of aspiring fashion models around the world.

“I’ve lived a full life. I’m in a very good situation. And I don’t need anything. I am here just to help,” she said.

“I could be in St. Tropez right now, relaxing. But I chose to be here. This is where my heart is,” she said.