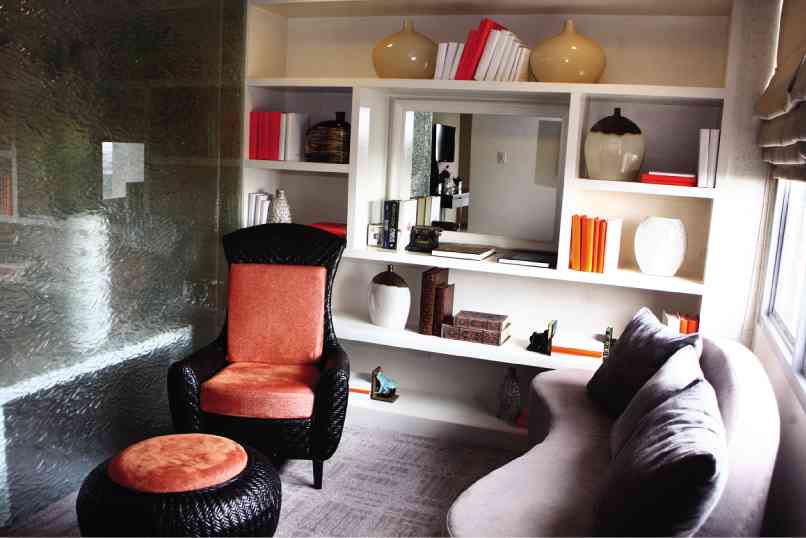 LIBRARY at the Romulo suite is outfitted with a couch and an easy chair.

Ninoy and Romulo would hang out here

The dust has finally settled and no construction work can be heard echoing through the corridors of the Waterfront Pavilion Hotel & Casino.

The 46-year-old hotel on United Nations Avenue—formerly known as the Manila Hilton—underwent the first phase of its renovation last year, including guest rooms from the 16th floor and up. It also saw the creation of two presidential suites named after UN General Assembly president Carlos P. Romulo and Sen. Benigno “Ninoy” Aquino Jr.

Prior to the renovation, there used to be only a Romulo suite. Now, the suites on the 19th and 20th floors sport new if similar looks by interior designer Sonia Olivares.

For the Romulo suite, she combined purple and green in the living area, while the dining area was spruced up with upholstered seats and drapes in turquoise and beige. Meanwhile, the Aquino suite, which shares the same layout as the Romulo suite, was outfitted in sunny shades of yellow, a color identified with Aquino’s wife, late former President Corazon C. Aquino.

The suites were named after Romulo and Senator Aquino for different reasons. “Romulo was a good friend of the Delgado family, the original owners of the hotel. Every day, from Monday to Friday, he would have lunch here,” current hotel general manager Christopher Park told Inquirer Lifestyle.

“Senator Aquino was at the hotel when the warrant for his arrest was served. He also loved dining at The Rotisserie,” Park added.

The late award-winning painter Federico Aguilar Alcuaz lived in the hotel until his death in February 2011. A great number of his paintings used to be displayed at the hotel’s steak restaurant, The Rotisserie, and in his room, but they have since been put in storage.

Park said that the first phase cost the hotel P300 million. “This is a property that has been around for a long time, so the changes that were made were not just cosmetic in nature. We gutted walls, replaced pipes and tore out most of the electrical wiring and replaced them with more modern wiring.”

Most of the old furniture—couches, beds and bedside tables—were donated to the Red Cross while some of the antiques were also put in storage. Instead of having a suite designed in honor of Alcuaz, the hotel’s still-to-be-renovated function rooms will serve as a repository and display of the artist’s paintings.

After the first phase of renovation, the hotel was ready to receive guests. “Fortunately we were able to finish a month early,” Park said.

Asked whether any of the suites have been reserved or requested by guests, he said there have been very few. Unlike the regular guest rooms that measure 30 square meters, the suites—with their foyer, library, living area, dining room, mini kitchen and spacious bedroom—measure 150 sq m.

“These suites are really triggers or catalysts for the hotel. If a visiting dignitary arrives, they can opt for the presidential suite, but then he or she usually travels with an entourage. Meetings can be set at either of the presidential suites, but we hope to earn from the regular guest rooms booked for his entourage,” Park said.

The second phase of renovations encompassing the lower floors and function rooms is underway.

“We intend to keep renovating, maybe every five years. The Filipinos’ warmth and hospitality are already a bonus, but we need to entice people to keep coming back,” he said.

“One thing guests can look forward to is the updated restaurant setup at Seasons, our all-day dining outlet. Not very many people are aware of it, but we were the first hotel to offer different food stations,” Park said.