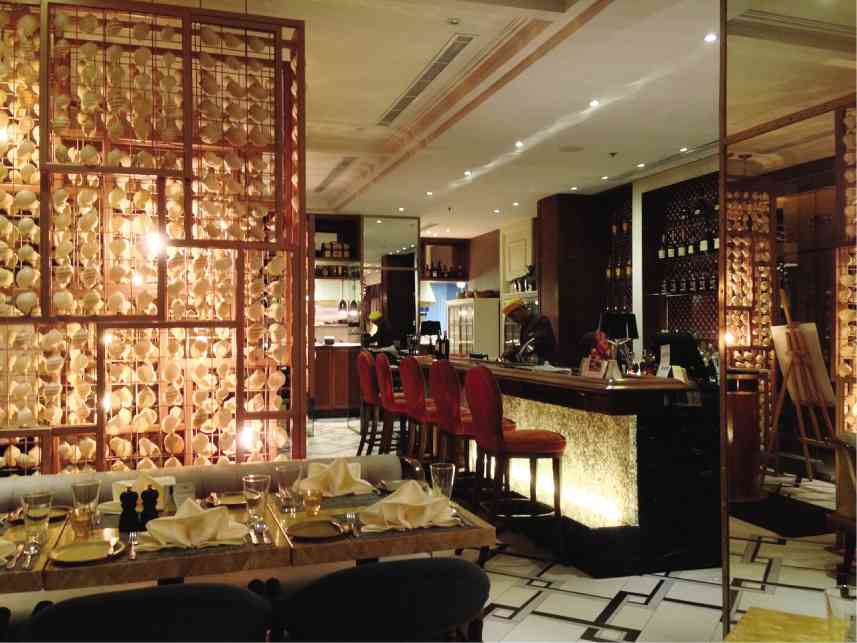 Well-meaning if befuddled– but the steaks remain faultless

Across large swathes of the Pacific, as well as China and Africa, the cowrie shell was used as a form of currency up to the mid-19th century.

Almost as ancient is Cowrie Grill of Manila Hotel, where my father went on dates in postwar Manila and splurged on the best food that was worth spending money on for a young man making a living: porterhouse steak.

The Cowrie Grill in Greenhills is gleaming and new, which doesn’t compute in my head, because everything I associate with Manila Hotel is old, as well as being very far away. I have a nostalgist’s soft spot for the old place, once ranked the eighth on the list of Best Hotels in the World, at a time when the exalted Oriental in Bangkok took the top spot.

Both have dropped in the rankings since the ’70s, but the Oriental is still the flagship of the multicontinent Mandarin Oriental group, while Manila Hotel has been struggling to maintain its amour-propre since its acquisition into private hands.

To be fair, they do try their best, and things have improved since the run-up to the centennial last year. The old Art Deco Maynila Ballroom is still impressive, the Champagne Room still retains its old trappings, and the air-conditioning, which seemed not to have been cleaned since MacArthur was in residence, is less pungent.

I expected that at some point the hotel would have entered into some sort of partnership, such as the “Four Seasons” George V in Paris, the “Waldorf-Astoria” Trianon Palace at Versailles or the “Fairmont” Peace Hotel in Shanghai. But they’ve plugged along without selling out (or buying in, depending on how you see it) and they seem to be muddling along.

When they converted the poolside area to Café Ilang-Ilang, they moved Cowrie Grill not to the other side of the hotel but to the other side of town, where it’s now in a strip mall of sorts. The cowrie shells are either new or have been thoroughly washed of four decades’ worth of grime, but the old, stiff formality and tableside service have been relocated without alteration.

This sometimes means there will be a crowd of passers-by with their noses glued to the window when the wait staff is executing something particularly spectacular, like a flambé.

As a child, my idea of a special meal was Caesar salad, a steak and crêpes suzette prepared tableside, and so this is what we had. The service was as glacial and fumbling as it was in the 1970s, but they do make the Caesar salad on a cart, from scratch, as they would have done at Mario’s on Session Road—crushing the anchovies and emulsifying the egg yolks and olive oil into a thick pomade, like Tancho gel. But it was very good.

The shrimp cocktail had gigantic prawns draped over the edge of a silver bowl, but not much else. The oysters Rockefeller are recommended instead, monsieur; they are large, plump oysters cooked to perfection.

The steaks arrived at various times rather than all at once, and again after a long wait, but were faultless. The crêpes suzette were a little less scintillating than I would have liked, leaden and doughy rather than light, and with a rather dull sauce. The extremely retro Baked Alaska was, alas, an overly sweet mess.

It seems rather odd to have the conceit of carts and waiters who finish the dish at the table, which used to be the norm for French restaurants and is still practiced at places like La Tour

d’Argent, for the duck, and Taillevent, to debone and fillet the sole. It’s even more odd to find this in a place like Greenhills, which is known for its fickle and demanding, as well as practical and efficient, clientele.

True enough, a few tables of the local residents came in at around 7 p.m. and stampeded out the door by 9 p.m. as though there were a fire drill. Tableside carts are for long, luxuriant dinners with discussions of philosophy, politics and poetry. We only ordered appetizers, mains and dessert but, by the time we meandered out the door, the chef had gone off on his motorbike and the lights were off everywhere in the mall. Such is the regulated schedule of the Greenhills crowd.

It might be trading on nostalgia, but I myself enjoy the taste of nostalgia, and if you’re not in a hurry and forgiving of well-meaning but slightly befuddled service, it’s a pleasant journey back in time.

Retro, after all, is the new cool; and a new generation of young upstarts can order porterhouse steaks to impress while going a-courting, as many have done for decades, at Cowrie Grill.