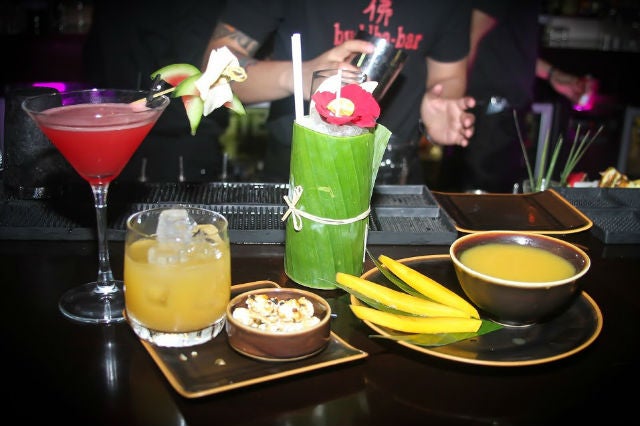 From Paris to Manila, the Cocktail Festival 2014 has finally landed in Buddha-Bar Manila doorsteps, ready to unleash the most awaited cocktail trends of the year. Tagged as the festival that conquered every party destination, Buddha-Bar Manila Cocktail Festival 2014 will introduce the in-cocktails that will surely tease your buds and leave you abuzz.

Exclusively offered by Buddha-Bar Manila, the Cocktail Festival 2014 will be presented by no other than Buddha-Bar international bar mixologist Mathias Giroud. Known as The Alchemist for his superb genius in crafting the most delectable and stylishly tasty cocktails, Giroud has conquered the party and dining scenes across the globe, from Monaco to New York, Mexico to Sao Paulo, and to the Middle East, bringing every diner and guest to cocktail heaven.

The Buddha-Bar Manila Cocktail Festival 2014 will take place from March 19 to March 22  showcasing all the best from cocktail mixing, flair tending, and many more unique ways in presenting this year’s cocktail trends only by the cocktail master Giroud.

Officially opening on March 19, the Cocktail Festival 2014 day 1 will present the all-new Buddha-Bar World Signature Cocktails. The newly-born and formulated drinks of 2014 that captured the chic taste of diners across the globe will be exclusively launched by Giroud. Set to join the current bar list of your favourites, the Buddha-Bar World Signature Cocktails will show you a new twist on the usual and something new from the common.

“I want to share my world” says the main event of the night, Giroud, who confessed that his biggest influences in perfecting cocktail arts are Sushi Chefs. “It’s magic” Giroud told INQUIRER.net while explaining that it is his fascination on Sushi creation that’s inspiring him to always bring something new to the cocktail table.

The first of the four World Signature Cocktails brings diners to Madagascar. The Kawai Ylang allows spectators to enjoy the sweet taste of watermelon and at the same time, the gentle kick of the Ylang Ylang.

The Jack Legacy, which comes with caramel-flavored popcorns, tours Buddha-Bar regulars to the United States. Its upfront and uncompromising taste convinces one that this is definitely a bite of the west.

Sakura, Japan’s representative in the Cocktail Festival 2014, on the other hand offers that distinct – complicated you can say – but very interesting Asian flavor.

And the Goa Masala of India is the closest taste you can get to authentic Indian spices.

True enough, on the second day, Giroud brings out the artist in him as he shows off his skills through Cocktail Painting Limited Edition. Through this performance, Mathias takes everyone into the world of cocktail artistry as he present the latest trend in cocktail crafting through the form of painting.

Every night is expected to get better. On March 21, diners and guests are in for an exclusive treat as Giroud takes flair tending into a whole new level in the Dragon Fire Cocktail exhibition. Making the unimaginable happen, Giroud will set the bar on fire as he prepares for drinks you have never tasted before. Proving that he is more than your typical mixologist, Giroud plays with fire and skills as he flair tends in front of the crowd making day 3 of the Cocktail Festival a memorable and explosive one.

As a culmination of Buddha-Bar Manila Cocktail Festival 2014, Giroud will wrap-up the previous nights into one grand finale. On March 22, guests, diners, and Manila partyphiles will witness an ending like no other. As Giroud sums up the Cocktail Festival 2014 days 1 to 3, he will introduce the much anticipated cocktail trends and let everyone experience the joy of a lifetime through The Alchemist’s genius in crafting concoctions and cocktails.

The Buddha-Bar Manila Cocktail Festival 2014 will definitely be one for the books as metro diners will have an exclusive treat and taste of the cocktails that dominated every global party scene.