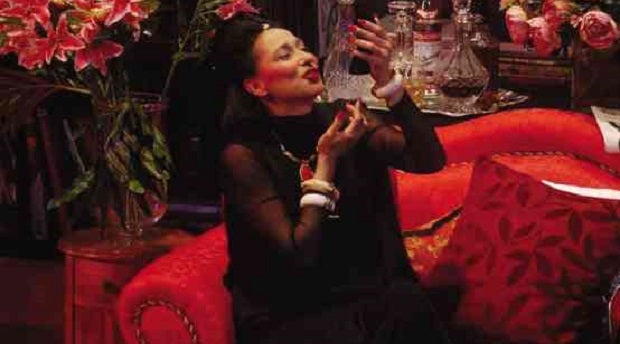 CHERIE Gil as fashion doyenne Diana Vreeland in “Full Gallop,” which has closing performances this weekend at the RCBC Theater,Makati City

Actors are tasked to be chameleons; their success lies in disappearing within the roles. If the actor is not a good performer and fails to deliver, the audience easily picks up the lack of authenticity, and the bond and rapport between them is broken. Soon enough, you hear stifled yawns from the seats.

However, if the actor is seasoned and good enough, but unintentionally slides into the comfortable confines of his or her own personality, then at a certain point a change happens: It’s no longer the audience relating to the character who has fully emerged on stage and taken over the actor, but it’s the audience applauding the actor for a performance that overshadows the character.

Admittedly, it is a thin line. Add celebrity status and the intrinsic adoration of the public and the line gets murkier: “Am I relating to this poor steel-maker trying to make a living and win the affection of his son, or am I applauding Mark Bautista for his breakthrough performance in ‘The Full Monty’? Am I empathizing with this Vietnamese girl rising above the ruins of a war, or am I enthralled by the fact that I am watching Olivier awardee and Filipino theater icon Lea Salonga recreate her famous role?”

Reviewers have to exercise extra vigilance to avoid blurring that line as well, especially because we have become familiar with the actors who frequent the stage, and their approach to certain roles.

As an example, Menchu Lauchengco-Yulo’s performance in Repertory Philippines’ “Man of La Mancha” years ago was a moment of epiphany for me. This classy, dignified, elegant actress, who has played a roster of roles from queens to neglected wives and spider ladies, has consistently gotten rave reviews; but her turn as an earthy, vulgar, “cheap” whore in the Don Quixote musical raised her a few levels higher in the pantheon of acting greats.

Which brings us to the point of this piece: How does Cherie Gil stack up in her depiction of fashion icon and bitchy magazine editor Diana Vreeland in “Full Gallop”?

The bottom line: Gil captures the essence and the spirit of the publishing legend. In “Full Gallop,” which is co-produced by Actors Actors Inc. and My Own Mann Productions, Gil is still an actress at the prime of her life. But her character, at this point in the play, is supposedly nearing the end of hers.

As depicted in YouTube videos and some of her biographies, Vreeland was a flamboyant, prickly and quick-witted lady who refused to take crap from anybody. “Full Gallop” opens when she has just been fired from Vogue magazine at the age of 68—and some of the Internet videos show some of the stiffness and fatigue setting in at this point. The fire has been dampened, the energy losing steam—but then again, that would be normal for people who are approaching their 70s.

In the play, that fire is still raging. Gil’s Vreeland is still fighting against the dying of the light. She’s fighting to maintain her status and respectability in her very ruthless world. Fighting to keep the status quo while her friends are abandoning her one by one. Fighting to keep her stunningly appointed apartment (set design by Joey Mendoza), symbol of her stature, and the kind of life she has lived—while her own children are pleading with her to retire with them.

In one of the play’s memorable lines, Vreeland says: “Why does everyone want me to work in a museum?”

As written by Mary Louise Wilson and Mark Hampton, this monologue is both a nostalgic trip to a glorious past and a gradual, painful realization of one’s downward spiral. The sunnier parts let Vreeland relive her previous triumphs, letting the audience see the influences that formed her as well as her stratospheric rise to the upper echelons of the fashion world. They also give an insight into the kind of personality that won for Vreeland hordes of admirers as well as enemies.

Gil, as directed by Bart Guingona, deftly rides the emotional swing of her character, going from long minutes of self-absorbed exultation into seconds of heartbreaking silence. It is not an easy arc to maintain, but she navigates her character’s emotional terrain without breaking her stride or giving in to exaggeration.

A lesser actress would have resorted to an interplay between bravado and  sentimentality. Also—face it, one-man (or -woman) shows are a tough act to pull in theater. It’s not just a matter of commanding the entire center stage for a couple of hours, expending all that energy with no other performer to banter with. The bigger challenge is how to depict the character consistently without slipping into caricature, stereotype or the mannerisms that are similar to both the role being played and the human thespian doing it.

But in Gil’s performance, there is not one inauthentic note.

The actress, in fact, still seems to be reining it in in some moments. One senses she has a lot more to give. Perhaps the production team is just warming up on its first weekend?

The fashion guru did end up in a museum—not as a relic, but as a supreme innovator whose designs drew people back in and set a whole new standard for style and panache.

“Full Gallop” is having its closing performances this weekend. Call 8919999.