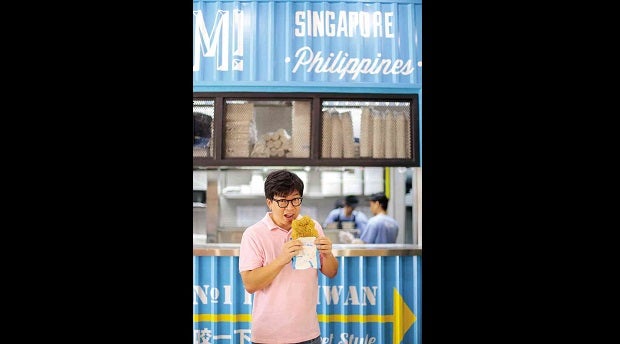 In Taiwan, it may be your typical street food—think fishball, isaw, tokneneng. But this fried chicken is even larger than what you think it is.

Famous for its size that’s comparable to a human face, Hot Star Large Fried Chicken boasts of its unique serving of chicken fillet. Now, with its newest franchise at Blue Bay Walk, Macapagal Boulevard, in Pasay City, Hot Star adds a Filipino twist to the specialty—an extra serving of rice and many more.

“In Taiwan, they just eat it as it is, on pouches,” said managing partner Richard Chua. “But Filipinos normally eat while sitting, and, of course, with rice.”

Chua thought of bringing Hot Star to the Philippines when he and his friends were walking in the streets of Taiwan and discovered what the fuss of long lines to an eating place was all about.

When Chua, who also manages the Peanut Butter Co. restaurant chain, started to negotiate with the owners of Hot Star, there was a problem with the menu and what type of store to put up.

The Hot Star outlet in Taiwan was kiosk-type, said Chua. “It sells one kind of chicken, which is also paired with side dishes.” He believed the setup would not work in Manila “since we don’t have [regular] night markets…”

He invited the Hot Star owners to visit Manila. They were surprised to find a lot of chicken restaurants operating. In the end, they gave Chua’s group a free-hand to tweak the menu.

An additional P35 is charged for a whole meal with rice and a drink.

“We added these because we want to have our own distinct Asian flavor,” Chua said.

As far as the trend of fast-food chains offering unlimited rice to customers is concerned, Chua wanted to follow it but in a different way.

“Ours is sort of an unlimited ulam because, most probably, a single person wouldn’t be able to finish one large fried chicken in one sitting,” he said.

Chua has been hearing good feedback from customers after Hot Star opened on Feb. 25. His first few customers were Taiwanese. However, he hopes that Filipinos would adopt the “Taiwan way” of eating Hot Star chicken.

“It’s like fishballs. Maybe that’s why no one attempted to franchise Hot Star here, because a kiosk will not work out here,” he said. But he’s convinced that he made the right move, because Hot Star chicken is “sulit” (worth the customer’s money).

“We don’t pound the chicken to make it look big,” he said. “When you see the chicken, it’s thick and juicy. And it’s the breast part.”

He added that he has tried weighing a piece of Hot Star chicken versus the usual two-piece chicken served in fast-food chains. Both deboned, Hot Star weighed heavier.

The Filipino Hot Star kitchen has the same commissary as Taiwan’s. It is ready to open more stores soon. It will also be opening an express lane to accommodate takeout transactions, preferably on weekends.