What I want to be when I’m older | Inquirer Lifestyle 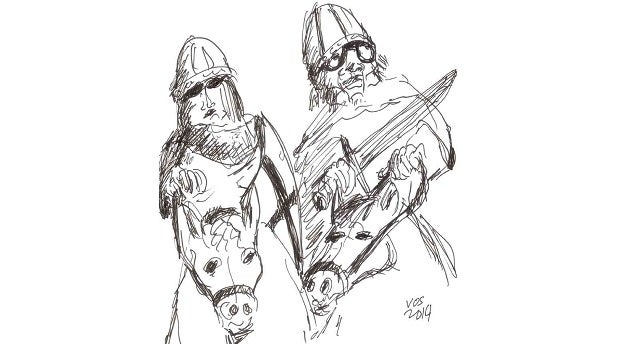 “THIS is no costume party, this is for real!”

What I want to be when I’m older

Presuming, of course, there’s time yet to be anything other than older, I do have some thoughts about what I’ll be then. They’re really not so much about becoming something or someone else as about going out in some style, with an image to be remembered by.

After all, even crazy people develop their own theme, sometimes taking on a famous character like Napoleon or Rizal. As my Lolo Rafael liked to say, “Cada loco con su tema.”

The idea of what my own parting tema is might have dawned on me when I overheard a contemporary, unable to contain her admiration, speak of a 90-year-old woman who pillion-rides on a motorcycle with her proud great grandson, wearing a long skirt with a generous slit to show off her fair legs, long silky-white hair flapping in the wind. That may be impressive, but I myself don’t see the gracia in risking life and limb for thrills—not at any age.

Another lady, a friend’s mom, after becoming widowed in her early 70s, re-enrolled at the University of the Philippines to finish college. Garbed in T-shirt, jeans and rubber shoes, taking public transport, like everybody else, she stood out all the same. Her daughter anxiously said a daily prayer and was infinitely grateful every time her mom came safely home from school.

The old lady became a delight and inspiration to classmates and teachers; she blazed a bold shining trail, in fact graduating with honors. She died, well-remembered, in her 90s. I myself took up a journalism apprenticeship in my early 40s, boldly late enough as it is but still no comparison.

I had a widowed aunt who decided to spend her 80s—longevity runs in the family—visiting hospitals picked at random, certain there would be someone she knew well enough who would welcome her unexpected visit, and her mere vibrant presence proved, some say, comforting, if not healing.

She would ask for the “guest list”—for how she got it, I could only credit her charm, fair renown, and apparent goodwill—and surely, often enough, she was right. If it turned out she knew no one confined, she would drop in on doctor friends—she happened to have a battalion of them, and they always made time. Then she moved on—to another hospital.

She infected people with her joie de vivre. An older spinster sister explained it as “a sort of hobby she was made for.”

Another old maid aunt, who dutifully took care of her ailing mother, finally, upon her ward’s demise, found her freedom in her 80s to watch, sometimes by herself, as many musical shows as she had missed.

My husband and I have always loved going to musical shows, and since he left his job as a newspaper publisher, recently, we’ve had to buy our own tickets—not so bad, really, on a senior discount. For “Wicked” we were almost in the rafters of the Cultural Center.

As I stopped to catch my breath before entering the theater, a young man offered his arm for the descent to my seat, giving Vergel a chance to go to the men’s room before the show. At intermission, I stood up, deciding so late to go to the ladies’ room. The same young man was at hand to escort me up the steps. Worried about standing in line too long, I was reassured, “Seniors don’t have to line up, Ma’m, someone there will assist you.”

Those are the nice little perks we elders get that make up for other younger people’s insensitivities, such as, for instance, the mockery we get for our age from a couple who publicly expressly wished we were dead before we could get them out as illegal tenants (which we’ve done) and hound them to hell (which we intend to do), where they obviously belong.

We happen to believe life is a generous gift of time, and, against mockers of life (among other things) like them, any fight can only be a moral one.

When I was younger I saw my grandfather in every old man, and thus easily felt an affinity to him. Now when I myself see older people out with their families, I miss my folks and wish they were still around no matter how old. Younger people smile at the sight of us holding hands, and I feel gratified by the shared feeling.

But it’s not enough to be grateful for and appreciative of life; it’s also imperative that, once wronged, let alone mocked and threatened as one gets on in age and with life, one ought to fight, itself the ultimate appreciation of life.

And we intend to undertake it with all the alacrity and seriousness it requires.

A fighter’s theme for us when we get older should be a fine one.