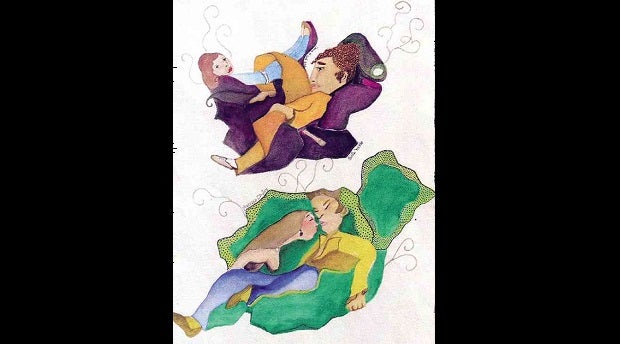 Certain marriages, one might say, are like mashed potatoes. As personalities, the couple blend together so well. Like, well, horse and carriage, sago at gulaman, table and chair, love and kisses.

Once in a while I couldn’t help envying unions like that.  You couldn’t invite Mr. without Mrs. or Mrs. without Mr. It just wasn’t how the cookie crumbled, there was sticky jam in between. In extreme cases, you could talk to them only as a pair, as Siamese twins. And one answered questions for the other and the other replied for the one.

Harmony to the max. Solid compatibility. You could almost see them in two uniform wheelchairs, white-haired and still holding hands as they rode into the sunset. And, of course, they shared the same crypt.

I didn’t have a marriage like that. Which should account for the envy. We were more like two soft-boiled eggs with individual shells, only sometimes cracking, oozing out and blending together.

We were steak (him) and kropek (me). But we loved each other and stuck together for 58 years. He was straight corporate, no-nonsense. Art and culture in big corporations were not yet in vogue then, and so a culture vulture like me was irrelevant.

I am writing this because I lately came upon an old journal about my marriage that I had once kept. There used to be so many events I was so defensive about wanting to go to. Normal stuff that couples usually attend together but that I had to go to alone (if allowed). A play, a concert, an art exhibit, a book launching. How safe can anything get!

Being able to attend such mundane things sounded like forbidden pleasures. This guilty attitude, I now realize, was all of my own making.

Eventually I did come into my own, and how! I guiltily published books, did costumes, produced plays, bought artwork, as quietly and as secretly as possible until found out. I was always so sure he wouldn’t approve.

It was a difficult marriage, but we were an abnormal couple so it was a challenge and we made a good life out of it. No one was included in the protected circle of our family, and that was good.

It is almost three years now since my husband’s demise. Maybe the occasional loneliness and missing will always be there. But most of the time I have just been deliriously happy about my independence! I guess widows, except the most adhesive types, feel the same way.

Also, it may be a part of widowhood, too, to feel guilty about being able to roam about so freely! (Maybe people would think one hadn’t loved one’s spouse?) Actually it’s only a reward for having paid marriage its dues.

Exhausted after a cram of activities, I can lie on my bed and ask the maid to remove my shoes, my clothes, my earrings, put on a CD and feed me in bed. Later, my faithful cook will shampoo my hair and give me a hot bath on a stool in the bathtub. Oh, to have help who love you and take care that you don’t slip and fracture a hip! Do I feel guilty about being so lazy even if old? No! Just grateful.

Anyway, no one is around now (boo-hoo) to see and be offended by the long table in my bedroom (and the big dining table as well) being a tangled mess because I’m painting. Because, damn it, I’m an artist now. There’s water and paintbrushes in three beer mugs, some of them in soft-drink colors and always in danger of being drank. There’s paper in the process of being measured (and abandoned), there’s cut-up felt stuff, Japanese washi paper for decorating, also glitter and paste.

My old paintings are scattered on the floor so I can review them, and the new ones are Scotch-taped to the wall, the better for me to detect their defects. A batch of old works are ready for pick-up for an art sale or for donation to a charitable event.

The best ones are ready for pick-up by the framer. The clutter doesn’t much matter because I can’t see much of it anyway, because of my cataracts which I’ve decided to keep for life.

Few people are as sloppy as I’ve become. (Do you think my painting will improve if I tidied up?) Anyway, by 9 a.m. tomorrow the maids would have straightened everything up because they can’t stand the mess either. No one would believe that last night it looked like “Yolanda’s” playground.

I like doing everything at the same time, and, surprisingly, they all get done. I like to go to art happenings, plays and other people’s parties. I like giving small parties of my own, so there’s a bit of that as well.

There’s this relentless column deadline. I was a leisurely fiction writer, how did I ever get into this fix? When I’m depressed, like now, I will write all about myself (who else?) and it embarrasses me to bits!

Plus, I have a big solo art show on July 10 in Silverlens Gallery, 2/L, YMC Bldg. II, 2320 Pasong Tamo Ext., Makati City, to which you are all invited, because it’s really nice. There’s a great deal to fuss and worry about, too. The house, the car, the new maid, the package that hasn’t arrived, my grandson Quinito’s costume for the party—will he like it?

But I do the worrying at night. So, I have insomnia, which I have to worry about, too.

I have decided not to regret my marriage not being mashed potatoes to add to all that. Because now I realize that what all the marital turbulence was for was to accumulate rewards. Brownie points for a next life that’s a little more mashed.