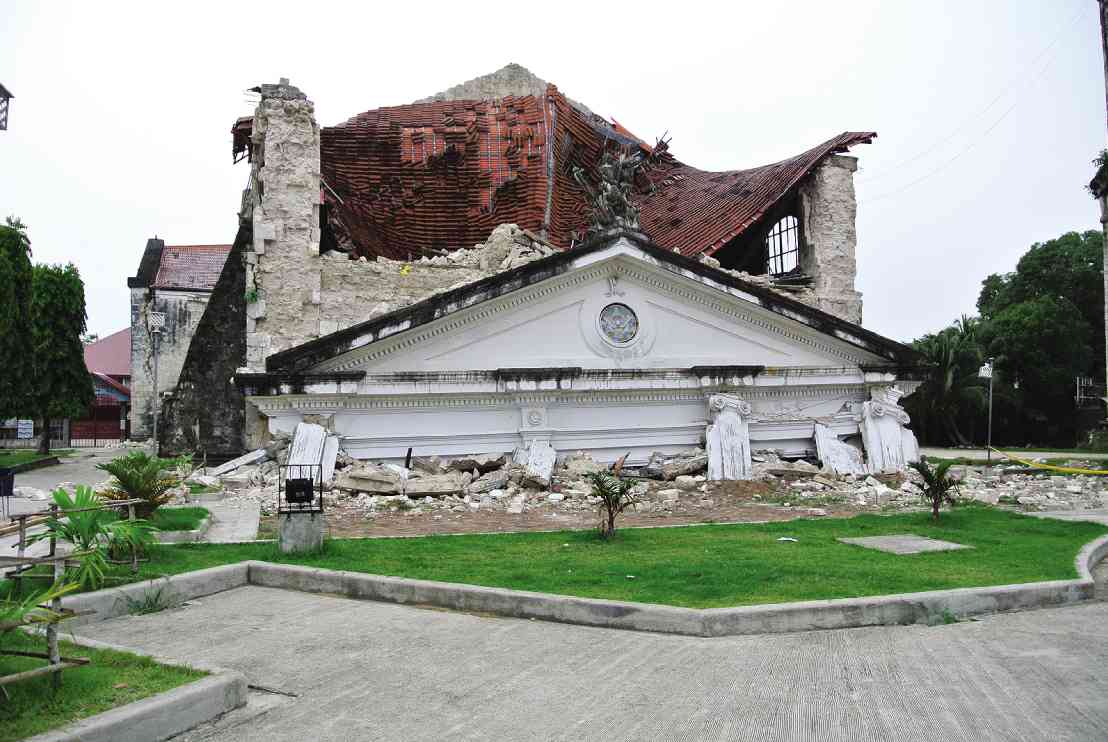 THE COLLAPSE of a later addition to the church façade caused the structure behind it to fail.

A few weeks after the earthquake struck Bohol last October, members of the Association of Structural Engineers of the Philippines (Asep) volunteered to survey and to propose procedures to restore, repair or replace damaged heritage structures.

At a recent forum jointly organized by the International Council of Monuments and Sites (Icomos) and the National Museum, Asep engineers Miriam Tamayo and Antonio Pimentel presented their findings from a structural engineer’s perspective in everyday language to a nontechnical audience.

Equilibrium means that foundations below ground should be strong enough to take into account existing soil conditions (sandy, muddy or rocky, for example) while being able to carry everything above ground that includes the total weight of the structure (walls, floors, stairs, roof).

Not only that, the structural system (vertical columns and horizontal beams) should be strong enough not only to support the weight but also to resist stress brought about by rain, wind and earthquake.

What brought a lot of houses down, Tamayo pointed out, was lack of structural equilibrium.

Some concrete columns and beams, despite having steel reinforcement, were too small for support. Steel was no guarantee for strength either, because in some cases, steel reinforcing holding up the concrete was insufficient.

Saltwater not completely washed away before sea sand is used for mixing into concrete can cause rusting of steel reinforcing bars.

In many cases, inadequate structural design, exacerbated by sloppy construction and unauthorized cost-cutting measures by inexperienced or unscrupulous builders, was a common cause for the failure of modern concrete houses.

Wooden houses fared better, discovered Tamayo, because wood has the natural characteristic of being able to sway with earthquake forces.

In residential reconstruction there is a need for improved awareness of structural-engineering necessities to secure houses from future disasters.

To ensure the strength and integrity of new structures, it is best that qualified and licensed structural engineers participate in the design and construction process.

Pimentel had inspected damaged churches in Bohol and he concluded that the original builders understood how to incorporate structural elements into the stone buildings to provide strength, and that the engineering of these buildings was sophisticated for its time.

Stone walls, thick enough to carry the weight of the roof above, were reinforced against earthquake movement by even thicker pillars that were integrated into the walls at regular intervals.

Stone arches above openings (doors and windows) evenly transmitted the weight of the upper walls around the openings. Additional openings punched into the stone walls in later years without protective arches above them caused either cracks or wall collapse.

Additions to the original structure proved to be damaging.

Caught with the remodeling fever, when new religious orders or secular priests took over Bohol parishes from the previous orders, new façades were grafted onto the original.

In most churches, damage began with the new façade which was the weakest point of the structure, falling first with the earthquake and, like a stack of dominoes, the original walls fell down behind it.

For example, the added porticoes added weight to the front of the structure that was not counterbalanced by an equal weight on the opposite end of the structure. A totally balanced structure stands a better chance to withstand earthquake forces.

There was much to learn from the Asep presentation that introduced basic engineering practices to non-engineers in the audience.

The professional dedication and practical wisdom of the engineers should be made available to the general public to increase the awareness that proper engineering ensures building safety.

Most important, Asep should be an invaluable partner in the conservation and rebuilding of lost or damaged heritage structures.

Photos are courtesy of engineers Tamayo and Pimentel.

To learn about Asep, visit www.aseponline.org.

Comments and feedback are invited to [email protected]