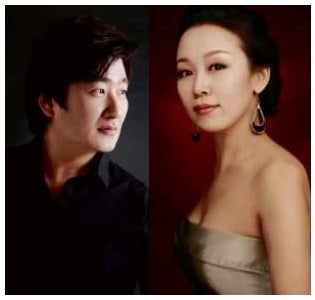 The concert is presented by the University of Santo Tomas Conservatory of Music and Ayala Museum.

Yun and Daesan have captivated opera fans and critics alike with their “impeccable musicality, unique vocal versatility and heartfelt interpretation.”

Last heard in Manila as Violetta and Padre Germont, respectively, at the Cultural Center of the Philippines’ highly acclaimed production of Verdi’s opera masterpiece “La Traviata,” their new concert promises a blissful night for opera enthusiasts.

Recently, she taught opera singing to students of Il Sistema in Venezuela.

Baritone Daesan, a graduate of the Peabody Conservatory of Music and the Academy of Vocal Arts in Philadelphia, performed the role of Falstaff in “Tanglewood” under the baton of Seiji Ozawa, the lead role in “Rigoletto,” and Leporello in “Don Giovanni” with the Lyric Opera of San Antonio, Scarpia in Puccini’s “Tosca,” and Escamillo in “Carmen” with the New York City Opera and Opera Grand Rapids.