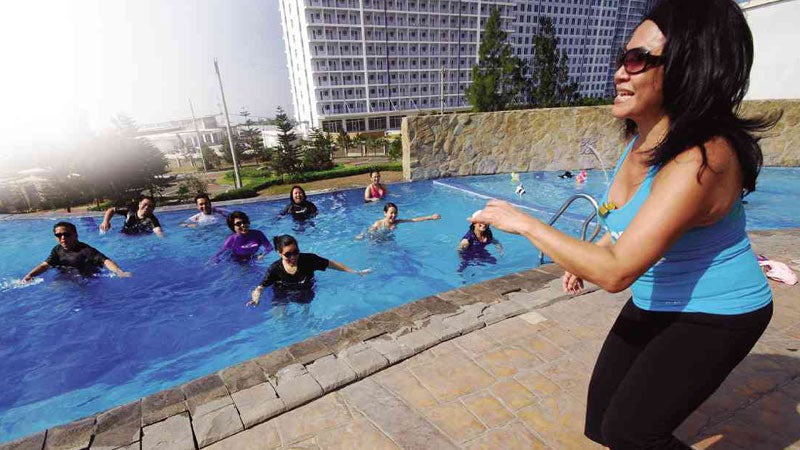 Bringing the Zumba party to the pool

Zumba is once again making waves in the fitness community—only this time, the party is moving to the pool.

Aqua Zumba, the low-impact water exercise often referred to by Zumba fans as the “pool party,” may just be the next big thing in aquafitness. Just add water and be ready to strut, spin, shimmy and roll your hips to the infectious beat of Latin music.

“It’s taking Zumba fitness to the water. We follow the same principles, but movement is modified to water exercise,” said Rowena Aquino Jose, Aqua Zumba licensed instructor. Jose held a special class at Summit Ridge Hotel in Tagaytay, the wellness and fitness hub this side of the country.

Although the aqua tempo is a tad slower than the regular Zumba on land, modified to maximize movement in water, Aqua Zumba is anything but a sissy workout. It’s quite the contrary, in fact. If you’ve ever tried run training in knee-deep water, then you know movement is far more difficult to execute in water than on land.

And that’s because water is 600 times denser than air, Jose said. Movements are executed with consideration to the density, buoyancy and weight of the water, she said. For you to gyrate your hips and do your sexy Latin moves, for instance, you will need to cut through water. This you can do with your knees or hands.

Since the people next to you, in front of you, and behind you are also moving, each sending wave upon wave bearing down on you, you will need to work extra hard just to maintain your balance. The core is engaged at all times. 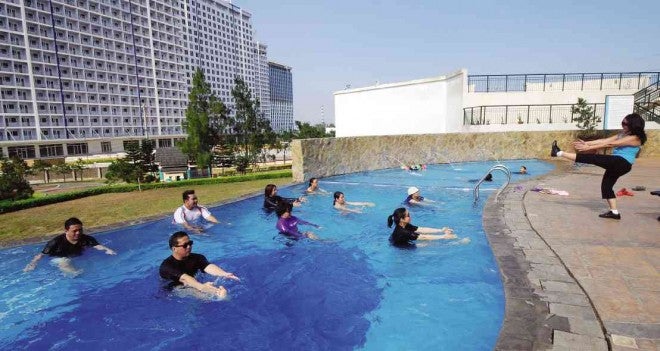 If that’s not good enough to keep your heart pumping, you can modify the level of difficulty by opening your fingers (less water resistance) or closing your palm (more water resistance). And you don’t have to worry about your “dance” moves, if that’s bothering you. Fancy footwork is kept to a minimum.

Your energy expenditure rises as your movement increases. A one-hour class typically burns anywhere from 375 to 700 calories.

“The more the body memorizes the movement, the more calories you burn. You won’t be stopping to check your moves every so often. That’s how you are able to maximize the routine and calorie burn,” Jose said.

Like in all Zumba classes, music and routines will change periodically. This is meant to keep you interested, and to introduce your body to new challenges. And just because the tempo is slower doesn’t mean it’s actually slow. The music is fast, really, with the pulsating bass of Latin sound.

Music is one of the most important factors in the Zumba formula. It has to be lively, inviting and encouraging. To keep up with the beat, muscles, including all passive muscles, are put to work, Jose said. Performing a full range of motion is difficult but extremely safe to perform without adding stress to the joints.

The impact on your joints is significantly reduced in the water, even as each movement becomes more challenging. Over time, Jose said, you will become more flexible.

Aqua Zumba is a cardio endurance, strength training, flexibility and joint mobility workout rolled into one. This cuts about a third of your workout time, Jose said. You get leaner and stronger, developing long muscles as you slice your way through water.

Water acts like weights. You can’t hold water and use it as weight as you would in the gym, of course, but because of its volume, moving it from one side to the other is already working on your triceps, biceps and lats. Each leg movement works on your quads and glutes.

“Water not only acts as weights but also as a buffer. No movement can hurt your back, knees or ankles because the water buffers you,” Jose said.

Anyone can join the class except children. (It’s stressful to look after children in the water, she said.) Aqua Zumba is performed in a 4-feet-deep pool, so you don’t need to be a swimmer to join the class. It is, added Jose, anything but swimming.

“Swimming and Aqua Zumba are two entirely opposite things. When you swim you go with the flow. Aqua Zumba opposes the flow of water. You’re always cutting though it and resisting it. That’s what builds muscles and strength,” she said.

All you need to bring is a hydration bottle and a good sun block. It would help, too, if you put on snug, supportive swimwear. People with back and knee injuries, pregnant women, and post-cardiac patients will benefit most from this aquatic exercise.

Classes use a combination of aerobics and interval training methods to create what is known as intermittent training (IT). With IT, short bouts of all-out movement, followed by active rests in between, increase the oxygen-transporting capacity of the body—called the VO2max—and significantly improves endurance compared to other forms of workout. The beat of the music then rises and falls according to the IT principles.

For more info, check out Jose’s blog at http://zumbamanila.wordpress.com/ or contact 0916-2990214, or visit the Summit Ridge Tagaytay website at http://summitridgehotel.com/ for the latest workout schedule.