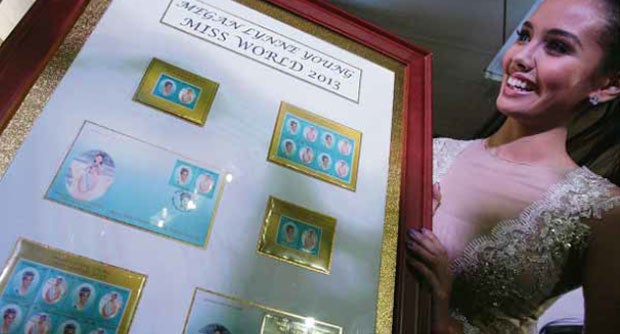 MISS WORLD Megan Young hopes people would bring back the lost art of letter-writing so they could use her stamps which were launched at the Philippine Postal Corp. on Monday. NIÑO JESUS ORBETA

Miss World gets own stamps

“I’m happy their collection will now include their (granddaughter’s stamp),” Young said.

“It was around two months ago when I learned (about the stamps) and I was like, ‘OMG! are you serious?’ I can’t believe it,” recalled the 24-year-old beauty queen who is the first Filipino to be proclaimed Miss World.

Postmaster General Josefina de la Cruz, PHLpost chief executive officer, said she hope the stamps would give the beauty queen “the kind of recognition and appreciation she deserves for the honor she (had) brought our country.”

De la Cruz said two designs approved by the stamp committee were released on Feb. 24, and will be in circulation for a whole year. The corporation initially printed 80,000 stamps but more copies are likely to be issued in the future, because “the demand was more than we expected,” she said.

She added: “If you notice, we have been busy with image building (and) in promoting respect and appreciation of Philippine stamps. I hope this will help in that area.”

“With times changing, when everything is digital, hand-written mail (is) special. It is good to receive something that came from the heart. I hope the [commemorative] stamps would bring back that time,” she said.

Young visited London, Moscow, Paris, Iowa, Chicago, Miami, Haiti and Colombia in the past three weeks to raise funds for projects benefiting children as part of her duties as Miss World.

Steven Douglas, event coordinator of the Miss World Organization who came with Young for the launch of her stamp, cited the beauty queen’s focus on fulfilling her promise to become “the best Miss World ever,” a declaration she made immediately upon her coronation in Indonesia in September last year.

The London-based official also dropped hints that this year’s global finals may be held in the Philippines.

“Bringing 140 countries’ message of hope could do a lot of things for the Philippines. This is the place to go if you want to have an experience of people who have been proven to be resilient. You also have the best resorts. It will bring business and sustainable growth. Wonderful things can be done here, and it will have a big impact on the future of your country. We hope to bring Miss World’s ‘Beauty with a Purpose’ to the Philippines this year.”