Filipino cuisine pits foreign bloggers against each other | Inquirer Lifestyle 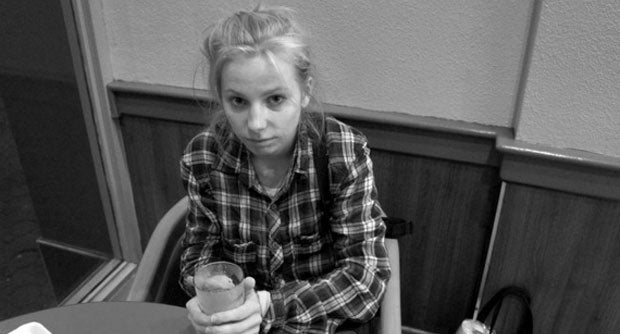 In her blog, Agness Walewinder writes that this is her "I'm starving but I don't want to eat this food" face as she blogs about her experience trying out Filipino food. She noted the "poor quality" and preparation of Filipino food that caused her to suffer stomachache and migraine. Screengrab from Walewinder's blog etramping.com.

MANILA, Philippines – Filipino food became a hot topic between two foreign bloggers who clashed about their views and experiences in trying out the country’s local cuisine.

Social media was abuzz after a Polish blogger Agness Walewinder wrote of her experience in eating the local cuisine, adding that she would rather be hungry than eat Filipino food.

She complained that she suffered from headache and dizziness after trying out Filipino street food. She said she and her fellow traveller Cez Król could not afford the fancier restaurants as they were on a shoestring budget of $25 (P1,130) a day.

Her blog caught the attention of another traveller Nathan Allen, who has lived in the Philippines for a year. Allen said Walewinder seemed to have intentionally written the article to gain traffic for her blog.

In her blog appropriately titled “I would rather go hungry than eat Filipino street food again!”  Walewinder said she suffered headache and stomach ache after eating Filipino food.

She also remarked about the “poor quality of food.”

“Most of dishes were left on the table without being covered with a lid, or without a fan to get rid of the flies…” Walewinder said.

The foreign blogger also complained about the preparation of the food.

“Fish and meat were mixed up together in the same bowl, sausages were displayed on a plate surrounded by flies and bugs, everyone was touching food with their fingers to try before buying…” she wrote.

She also said that the food was left on display all night long until someone bought it.

“It was a big mess, trust me!” Walewinder said.

Even fruits were not spared from her criticisms.

“The fruits we bought at local markets daily looked and tasted old and gross,” Walewinder wrote, adding that bananas “changed color into black,” apples “were tiny” and pineapples “were soaked in some kind of liquid that smelled bad.”

She also said she felt “bloated and tired” and suffered from “stomach ache” and “migraine” after eating food that were “packed with salt, sugar and oil.”

She also complained of not being served the traditional Filipino food like balut, adobo, asado and daing at the street food restaurants where they dined.

“Unfortunately, with tears in my eyes and broken heart, we must add Filipino cuisine to our ‘I would rather go hungry than eat this food again’ list,” the blogger wrote.

In a letter published in his blog, Allen retaliated by saying Walewinder seemed to have taken advantage of the negative publicity to garner traffic in her blog.

“You are receiving a lot of very negative attention… In fact, it seems like you might be intentionally trying to antagonize Filipino people in order to bring attention to your blog…” Allen said.

He noted that Walewinder wrote an earlier blog post in February 2014 calling Filipino food as “deep-fried and oily” and not “unique or surprising.”

“Knowing how many comments came the first time, you chose to make your opinions and wording even more abrasive (offensive?) the second time…and guess what?  The comments did indeed come pouring in!” Allen said.

“Yes, you have a lot of eyes on your blog, but is this really the kind of attention you want?  You hurt a lot of people to gain a few followers,” he added.

Allen also said Walewinder was being unethical when she declared not to eat Filipino food again even when she admitted she has not tried the more famous and traditional Filipino dishes.

In the end, Allen then suggested a few dishes that Walewinder may have missed out – the famous halo-halo, “pinikpikang manok,” “bulalo,” “kinilaw na tuna, ”Bicol Express,” “balut,” “dinuguang,” among others.

“I know it’s not fair to compare my experience to yours, because it seems you may have only been in the country for a week or so.  However, your short stay is exactly why I (and many others) hope you will be more careful with the ‘impressions’ that you put out into the world in the future,” Allen said in his letter.

Filipino netizens were quick to comment on Walewinder’s blog in defending their country.

“(T)o generalize (F)lipino cuisine as unappetizing as well as to invite others to subscribe to your opinion is but unfair and by far an insult to the intelligence of those who are interested to taste our local dishes,” wrote a certain Abe.

“I guess you went to the wrong places while you were here in the Philippines… Give our country another chance and visit us again. Next time though, go to places like Manila and Cebu,” added netizen Michael.

Cheery Bacabis also commented: “Word from a Pinay: In general, Filipino street food is not impressive… There are lots of delicious traditional Filipino food– you just need to look for them and pay way more than you would for street food.”

For Philippine cuisine to make international mark, exotic is the way to go