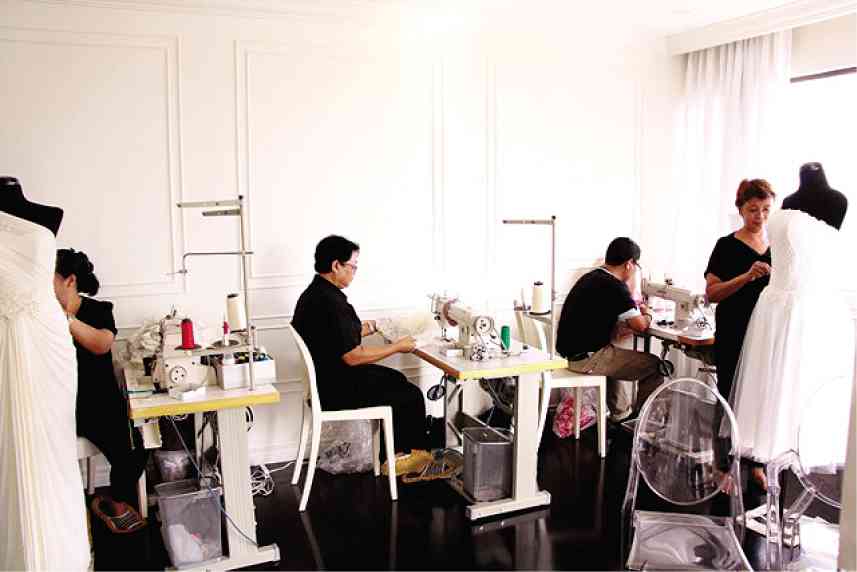 DISINI’S finishing team share the space with her. Above left, foreign glossy magazines and a photograph mounted on a plate are set against the gray-and-white toile wall in the powder room.

Upon entering this designer’s atelier on the 19th floor of a Makati condominium, you immediately sense that its owner is a woman with refined taste acquired not from New York, but from Europe—where she actually studied fashion and bridal wear for several months a few years ago.

Maureen Disini’s love of Old World cities, particularly Paris, is reflected in her shop’s black-and-white color scheme with French moldings, inspired by a number of bridal studios she saw in wedding magazines.

It doesn’t hurt that the small area, which she shares with her finishing team, has an awesome view of the Makati skyline and Manila Bay’s famed sunset. Her cutting and sewing teams are housed in an adjacent unit.

“When the sun goes down, I always tell my finishers to give me a few minutes so I could take in the view,” she said. “I’ve been living in this building for several years now, but I never get tired of the sunset. It’s really beautiful.”

The shop, which includes a fitting area and an adjoining powder room plastered with gray-and-white toile wallpaper, is just a fraction of the entire unit which Disini calls home.

“Paris has a special place in my heart,” said Disini, who studied at Istituto Marangoni. “But this is our modern take on it.”

Before her Parisian sojourn, she earlier studied at the Istituto di Moda Burgo in Milan for almost a year. Disini, then fashion editor and stylist, promised her boss, Tatler editor in chief Anton San Diego, that she would return to work as soon as her studies were over.

“My original idea was to just consign ready-to-wear dresses to a department store,” she said. “But when people learned that I went to Italy to study, there was a sudden demand for my made-to-order clothes.”

She had to give up magazine work in favor of designing full time. But before that, she returned to Europe, in Paris, and later to Central Saint Martins in London, for further studies.

“I took up vintage bridal wear at Central Saint Martins,” she said. “Four days after returning home, I started designing and running a business on my own. I began in my room, but I knew I had to move elsewhere because my operation was growing.”

Time was on her side, as the lease agreement on the adjacent unit her dad was renting out was almost due for renewal. Instead of extending the lease, Disini’s father allowed her to use the unit instead.

“But we had to renovate it before we could even think of moving in,” she said. “After a 10-month renovation, we finally moved in sometime last year.”

Disini collaborated with her Canada-based architect-brother and their local contractor to realize her vision. Based on her inputs, her brother was able to design an overall look for the entire unit, including the atelier.

She promised to give Inquirer Lifestyle first dibs on featuring the rest of her home, once the Italian-made sofa she ordered from a local supplier arrives. For now, we confine ourselves to her shop, which echoes the entire unit’s color scheme—from the off-white walls to the black, lacquer-coated narra flooring.

Instead of wooden furniture pieces, Disini went for several Lucite chairs, including one to go with her glass-topped working table. Its chrome legs give it a decidedly modern feel.

To distinguish her chair from the rest of the transparent pieces used by her clients, former journalist Bea Ledesma, one of Disini’s good friends, put a sticker of an animated Japanese doll on the backrest.

Since space is quite limited, Disini’s decision to go for transparent furniture pieces was inspired. Apart from imparting a corner of the room with a lighter touch, they complemented other elements such as a series of bookshelves and a black-and-white cowhide area rug.

“I love books, especially those related to fashion,” she said. “I always buy one or two whenever I travel abroad. We don’t have most of the titles here, and it takes a long time to order them.”

In keeping with the neutral color scheme, Disini had the narra floor treated with several layers of black paint and polish before topping it off with lacquer.

Her predominantly white fitting area, which is at the opposite end of the room, has for its focal point a statement bench made of petrified wood.

“I need a sturdy and sculptural piece where my clients’ friends could sit while they show them the gown or dress,” said Disini.

Feminine touches extend to a half-scale wedding gown Disini did as a graduation project for Central Saint Martins. Another black-and-white cowhide area rug in the fitting area again echoes the unit’s color scheme.

“I had to do it as part of the certificate course’s requirement,” she said. “It was like doing a real wedding gown but smaller. Because of its size, it was much faster to do.”

The fitting area connects to the powder room with gray-and-white wallpaper that she got from MC Home Depot. She would have wanted a toile print in black and white, but had to settle for the next best thing instead.

Equipped with its own lavatory, the powder room features another series of shelves containing more coffee table books and foreign glossy magazines. Perfumes, lotions and liquid soaps in fancy glass dispensers vie for space on the marble-topped sink area.

“I had to allot space for this area to give my clients with several dresses to fit some privacy and breathing space,” said Disini. “It’s all about making them feel special in a pretty and soothing environment.”