From Jeannie to mom of suicide victim | Inquirer Lifestyle 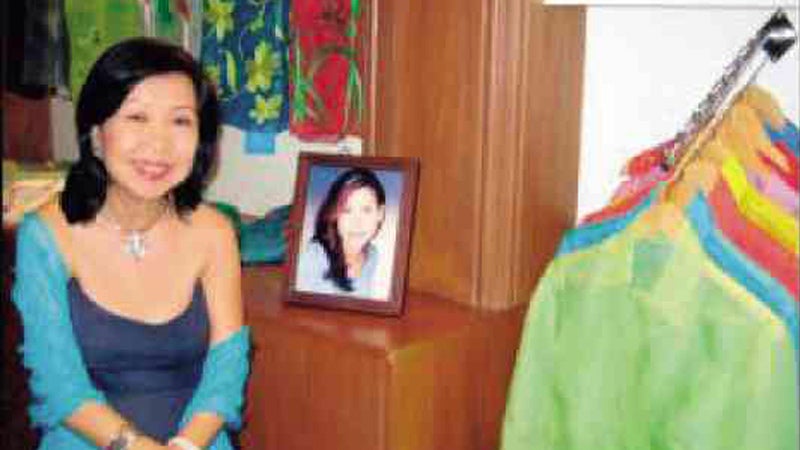 From Jeannie to mom of suicide victim

The book said, “Time heals all wounds.” Jeannie Lim Goulbourn threw it away angrily. “Lies! Impossible!” she thought. How could a book claim that you can get over the loss of your child over time?

But nearly 12 years since she lost her younger daughter, Natasha, to suicide, the fashion designer and wellness advocate now says the book was right: “Yes, time heals.”

“A parent must go through hell’s fire and back again,” says Goulbourn. “And the sorrows and years will begin to shape into something very sacred, and you can feel the footsteps of those who love you in the other world.”

Twelve years ago this May, Goulbourn received news that her beautiful daughter, a Hong Kong-based accessories designer, didn’t wake up from an apparent overdose of prescription medication. Natasha was battling depression. She was 27.

Last week, a mother close to Goulbourn also lost her daughter to suicide. Former publishing executive Lorraine Belmonte’s only child, Helena, 28, flung herself out of her high-rise window in the early morning of Thursday. According to an interview with her godmother, the model had bipolar disorder.

Goulbourn says she received an overseas call from Belmonte, who was in the US, shortly after learning of Helena’s death. “That moment brought me exactly to where I was in 2002. All around me at the time, I felt surreal because half of me was visualizing and journeying with my daughter through a dark tunnel,” says Goulbourn. “But I had to be strong for Lorraine.”

The older woman advised her friend “to get a hold of yourself. Never blame yourself, because I saw what a good mother you were to Helena. I saw how much you loved her. Don’t blame yourself for what you think you could’ve done to save her.”

These are pieces of advice that Goulbourn would not have heeded in 2002. Like most parents who lose a child to suicide, Goulbourn went through stages of denial, anger, guilt. She questioned God. “How could You? What wrong have I done? What do You want of me?”

She also blamed herself for not being there when Natasha died. “I could’ve been there in Hong Kong to look into her, but I sent her dad instead. Why couldn’t it have been me?”

For a long time, she couldn’t talk about what happened to Natasha, as if not saying it out loud would make it untrue. Also, for a time, the family was intensely private about the circumstances of her passing.

“There’s still a lot of shame and embarrassment when it comes to dealing with depression,” Goulbourn says. There is such a stigma attached to mental disorders that sufferers and their families keep it a secret or refuse to deal with it. And this mother admits that she went through that phase.

“There is the denial that our ‘happy’-most-of-the-time daughter/son is just going through a phase and cannot be depressed.”

Natasha’s death was a seemingly insurmountable blow to the Goulbourns. It shook the Goulbourns’ marriage. Older daughter Katrina suffered in silence, which made things harder for the mother.

“You know, talk about your child. Cry, get angry,” she advises. At the time, she had a good support group, both medical and spiritual. “Plus the love of family friends like Nena Tantoco, who spiritually walked me through. My daughter Trina and my sister Frances, we held on to each other.”

It took four years before Goulbourn could begin to move on from her loss. “I knew it when I wasn’t smelling her clothes and her pillow any longer,” she says. “She had a sleeping robe that I didn’t wash for four years. After that, I began giving away her things.” She has, however, kept some of her daughter’s bags and shoes, which the mother wears from time to time.

In 2007, she established the Natasha Goulbourn Foundation, a nonprofit that aims to raise awareness of depression and mental disorders, and how to prevent its effects like suicide. For every life saved through NGF, Goulbourn sees it as a validation of her daughter’s life.

Incidentally, Belmonte is part of NGF’s trustees and advisory board, an “invaluable asset” to the foundation, says Goulbourn. Natasha and Helena live on because “we learn to absorb their beauty and we share it back to others.”

Sure, a parent will always feel guilt about moving on, says this mother. “It’s normal to feel guilty. It would seem like you don’t love your child anymore because you’re moving on. But Tasha wanted me always to be beautiful. She insisted I go to the gym. ‘Never get old, Mama, as you speak my language, and that of my friends.’ ‘Be happy, Mom! You can even get a new husband if you get bored with Dad!’”

She advises parents coping with the loss of a child to “draw a game plan and think of survival kits, like going to the movies, dining at new restaurants.

“Travel to new places. Meet new friends. Listen to their stories, don’t get buried in your own grief. Make a plan to help a foundation in ways you can afford. Pray, communicate daily with the Lord. Get out of old habits. Learn new things; study painting, writing, piano. Exercise a lot. Have a purpose. Go to schools and volunteer. What did your child like most? Engage in her business, her hobbies, etc.”

Twelve years changed Goulbourn in more ways than she ever imagined. “I think I have changed inside!” she says. “I’m more aware of others in their challenges. More understanding. I’m more compassionate and have more empathy for mothers like me. I’m passionately driven to remind and to encourage the different government agencies like the Department of Health to do a campaign and put a budget into making depression and mental health a top priority.”

When she decided to carry on with her life four years after her daughter died, Goulbourn says she spoke to her child, and sought her understanding.

“In my prayer, I cried one last time and said, ‘Tasha I don’t love you less if my tears stop running. I love you enough to start being happy the way you wish me to be.’ That was the start.”