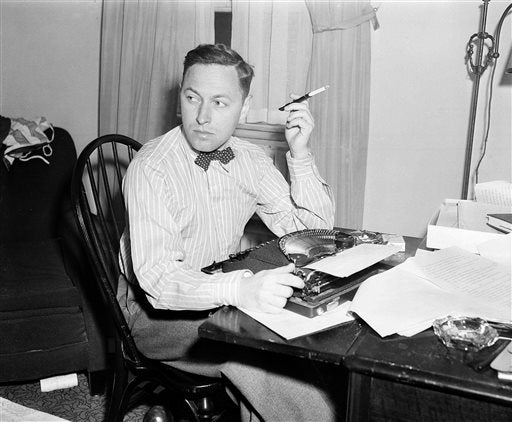 This Nov. 11, 1940 file photo shows playwright Tennessee Williams at his typewriter in New York. "Crazy Night", a work of short fiction by Williams will be printed in the spring issue of The Strand Magazine, a quarterly based in Birmingham, Mich. AP

NEW YORK — Before his mother became the model for Blanche DuBois of “A Streetcar Named Desire” and his sister the inspiration for Laura Wingfield of “The Glass Menagerie,” Tennessee Williams drew upon a college girlfriend — if only in name — to tell a story of desire, drunkenness and regret.

“Crazy Night” is a work of short fiction unseen by the general public until this month’s release in the spring issue of The Strand Magazine, a quarterly based in Birmingham, Mich. The story is narrated by a college freshman who confides about his romance with a senior, Anna Jean. Williams, while attending the University of Missouri at Columbia, briefly dated fellow student Anna Jean O’Donnell and wrote poetry about her.

“It (‘Crazy Night’) seems to have been written when Williams was rather young, probably around the 1930s,” said Strand managing editor Andrew Gulli, who has previously unearthed works by Mark Twain, Joseph Heller and Robert Louis Stevenson.

“The funny thing is that Williams in his notebooks and memoirs went into a lot of detail about his love affairs but with Anna Jean he made only a passing mention. Could this be the missing piece of the puzzle?”

Gulli found the story in the University of Texas at Austin’s Harry Ransom Center, one of the country’s top literary archives.

“Crazy Night” is set on an unnamed campus in the early ’30s, after the stock market crash of October 1929 and before the 1933 repeal of Prohibition, when “students graduating or flunking out of college had practically every reason for getting drunk and little or nothing that was fit to drink.” The title refers to a ritual at the end of spring term during which students are expected to binge on alcohol and sex, a bacchanal “feverishly gay” on the surface but “really the saddest night of the year.”

“There is a theme of disappointment, the old ‘mendacity theme’ from ‘Cat on a Hot Tin Roof,'” Gulli says. “He could show how beneath the cloak of respectability his characters had horrible insecurities and dark secrets. Williams was a master of showing the desperation and need humans have for companionship and was equally skilled at showing how relationships go sour and lead to cynicism.”

Williams was celebrated for his plays, but he wrote short stories for decades, many appearing in the 1985 anthology “Tennessee Williams: Collected Stories.” In the book’s introduction, Williams’ friend Gore Vidal wrote that the stories were essentially a fictionalized diary for Williams, who died in 1983.

“Whatever happened to him, real or imagined, he turned into prose,” Vidal wrote. “Except for occasional excursions into fantasy, he sticks pretty close to life as he experienced or imagined it. No, he is not a great short story writer like Chekhov but he has something rather more rare than mere genius. He has a narrative tone of voice that is wholly convincing.”

Williams’ language in “Crazy Night” is sensual and romantic, with the kind of dramatic turns of phrase that Blanche DuBois might have used, whether referring to a “black cloud of incipient terror” in the narrator’s mind or savoring the night air that “came in cool and sweet, faintly scented with a flowering vine.”

Even in more restrictive times, Williams wrote openly about sex, and “Crazy Night” includes a scene in which male students, most of them freshmen and virgins, are brought into a room and paired off with girls.

“It was handled in a very businesslike manner,” Williams wrote, “almost like vaccination the first day of school, each boy being allowed about five minutes, going in sort of white and trembling and coming out very loud and excited with a sheepish look on his face — indicating quite plainly the difference between an initial success or failure in the sexual skirmish.”

According to Williams’ memoir, published in 1975, he and O’Donnell had a “poignant and innocent little affair.” In his poem “To Anna Jean,” he calls her a “well-staged play, with lights and screens,” a description that could have applied to Blanche and other Williams heroines. In “Crazy Night,” the narrator loses Anna Jean to another student, but not before they enjoy “the ultimate degree of intimacy.”

“Both her arms were lifted toward me,” Williams writes. “I had fallen between them. And the rest of what happened between us was a blind thing, almost involuntary, drawing from us both something that seemed hardly a part of ourselves.”