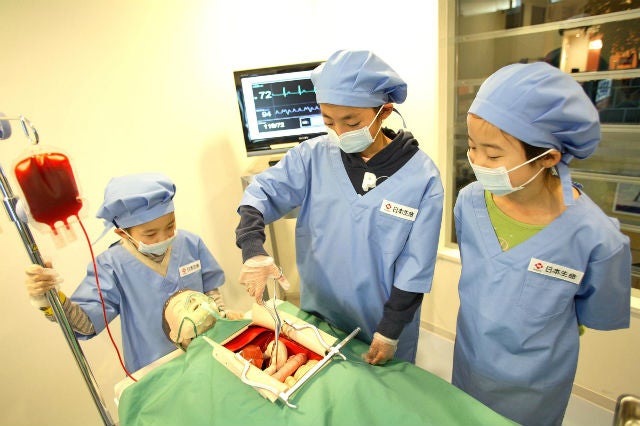 INQUIRER.net / 09:59 AM March 26, 2014
MANILA, Philippines—Nothing else gives children more joy than playing, when they are allowed the freedom to do the activities they want and create happy memories. But more than just fun and games, play is an important part of kids’ learning and development. It allows young ones to make sense of the world around them, building the physical, mental and social skills they need to succeed in their adult lives.

As children are naturally curious, they are drawn to the fun and wonder of pretend-play or role-play, one of the most powerful forms of play. In coming up with their own make-believe worlds, with different characters, stories and themes, kids enjoy the freedom to let their creativity run free.

Helping children explore their interests, gifts, and talents and learn through fun role-play is the key objective of KidZania Manila, opening at the Bonifacio Global City in early 2015. The first-of-its-kind indoor hyper-real play city recently brought together members of the press and family advocates to the Bulong Pulungan media forum at Hotel Sofitel in Pasay City to discuss the importance of role-play in a child’s development.

“Role-play is really child’s work,” shared child education expert and professor Maricar Gustilo-de Ocampo, Ph.D. “They need this opportunity to express themselves by using their feelings and emotions.  A child’s intuition is also very important in their world of play.  They feel the different characters that they want to know about.”

Dr. Gustilo-de Ocampo called KidZania “the dramatic play corner of the 21st century,” citing it as one of the best places for kids to experience role-play. “Here, children are given the opportunity to try out, pretend, and create different roles and characters, so that when they become adults, they will have a better idea about what they want to be when they grow up,” she added.

Because of its innovative approach to learning, KidZania made it to CNN’s Top 10 Best Franchisees for Travelers list, as one of the brands most recognized and trusted by travelers from all around the world.

“At KidZania Manila, kids can be anything they want to be. KidZania provides a unique role-playing experience for children, encouraging their natural desire to imagine, explore and create, to thrive,” said Maricel Pangilinan-Arenas, president and CEO of Play Innovations Inc., the local franchise owner of KidZania Manila.

At KidZania, children can independently explore a kid-sized city with over 100 role-playing activities in the different establishments found in a real community. They can role-play as firefighters and policemen out to save the world, pilots off to adventures, or teachers educating and taking care of young minds, helping them understand the functions of these people in the real world.

While learning about different careers, children also discover the inner-workings of a city and the concept of earning and managing money. Each experience is completely hands-on, building kids’ independence, self-esteem, financial literacy, teamwork and other valuable life skills.

KidZania incorporates real-world brands into establishments, partnering with businesses to bring to life a child-proportioned metropolis that pays incredible attention to detail—from paved roads, storefronts, buses and cars—to provide children with an authentic, interactive, immersive, and memorable experience. By doing so, KidZania uses this play community to inspire kids to aspire and believe that through their creativity, participation, and collaboration, a better community—a better world—is possible.

KidZania is an interactive kids’ city combining inspiration, fun and learning through realistic role play for children 3-14. Kids independently explore a kid-sized city with over 100 exciting careers. Each experience is designed to empower kids, giving them the confidence to be their best selves, and inspiration to be great global citizens. One of the world’s most inventive, most awarded and fastest-growing kid’s edutainment concepts, KidZania has 15 locations in 12 countries as well as 13 new sites under development across the globe, including in the Philippines.

KidZania, Inc., headquartered in Mexico, was founded in 1997, opened its first park in 1999, and is privately held. For more information about KidZania, visit www.KidZania.com, follow us at Facebook.com/KidZaniaOfficial, or on Twitter @KidZania.

KidZania is locally franchised by Play Innovations, Inc., a subsidiary of a local Television network (ABS-CBN Corporation), and is set to open at the Bonifacio Global City in 2015.