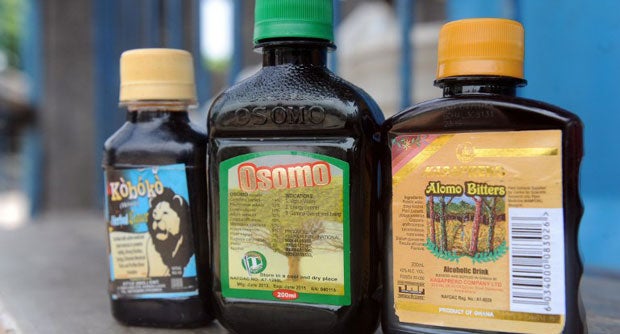 Bottles of local "viagra" drinks for sale are pictured in Lagos on March 19, 2014. Hundreds of hawkers ply the burstling streets of Lagos and other Nigerian towns and cities selling local "viagra" drinks, despite their unknown and untested effects on male sex drive. Medical professionals have warned that rather enhancing sexual prowess, regular users could be putting their long-term health at risk. AFP

LAGOS, Nigeria – Nike Ajibade and three of her colleagues sit on a Lagos pavement with small plastic bottles of liquids tucked inside weather-beaten plastic buckets.

The hidden bottles of so-called ‘viagra’ drinks sell for about $2 (1.4 euros) and are much sought-after for their supposed aphrodisiac qualities.

But medical professionals warn that rather than enhancing sexual prowess, regular users could be putting their long-term health at risk.

“Sales are high because of good patronage,” Ajibade, 27, told AFP.

“Most of my customers are manual labourers who need to boost their energy in bed after a hard day’s job under mostly inclement weather.”

Hundreds of hawkers ply the bustling streets of Lagos and other Nigerian towns and cities selling such “viagra” drinks, despite their unknown and untested effects on the male sex drive.

“They are creating health problems for themselves,” warned the dean of the University of Lagos’ faculty of pharmacy, Olukemi Odukoya.

“Unknown to them, some of these liquids have chemical substances which can cause liver or kidney problems, which are very expensive and difficult to manage.”

A promise of sexual potency

Viagra, taken to treat erectile dysfunction, costs between $5 and $11 per little blue pill in Nigeria — way beyond the means of most people who live on just $2 a day.

As a result, that creates a ready market for cheaper, apparent alternatives.

Besides the locally produced $2 bottles, others are imported, including so-called Alomo bitters which come from Ghana.

The Ghanian liquid is a blend of rich medicinal herbs and roots that are believed to cure back pains and piles but are considered an aphrodisiac in Nigeria.

Bootleg versions of the drink — with 42 percent alcoholic content — are available in the local market for about $4 for a 750 millilitre bottle.

Such drinks — all with names promising a nirvana of sexual potency — flood the Nigerian market every day, mostly via the country’s porous borders and seaports or past officials who turn a blind eye.

“I feel high and alright each time I have sex after consuming ‘koboko’ (horse whip) or ‘kondo’ (baton) drinks and my partner gives me a feeling of satisfaction,” said one young motor mechanic after buying a bottle.

Similar “aphrodisiac” drinks are found in other West African countries such as Togo and Benin under names such “XXL”, “Rox” and “Atomic”, finding a ready market of young male consumers.

There is no official control and medical warnings against their consumption are regularly ignored.

A senior lecturer in clinical pharmacy studies at the University of Lagos, Aderemi Williams, said no known scientific studies have been carried out on the drinks.

But reports indicate they could be harmful.

Most have not been tested or approved by Nigeria’s National Agency for Food and Drug Administration and Control (NAFDAC) regulator and accreditation can be faked by unscrupulous distributors.

“We therefore cannot vouch for their efficacy,” said the agency’s spokesman, Abubakar Jimoh.

“We are really concerned about the distribution of these illicit drugs and we are trying our best to put it in check.”

Health professionals warned that possible side effects could include anaemia, increased risk of cancer and stroke, cirrhosis and reduced fertility, as well as enlargement of the prostate gland.

“If they were good, we would have them on our hospital shelves, dispensaries and pharmacies,” said pharmacist Kunle Abifarin.

“And I am sure that most of them are not formally approved by the regulatory agencies.”

Nigeria has a wider problem with fake and adulterated drugs, with officials estimating that more than 70 percent of medication is bogus.

NAFDAC has arrested and prosecuted dozens of suspected dealers in counterfeit drugs and herbal products, destroyed seized goods and closed shops and warehouses where they were distributed, said Jimoh.

One University of Lagos clinical pharmacist said that instead of enhancing libido, regular drinkers of liquid aphrodisiacs may be risking their future fertility — and even life.

“They (consumers of the drinks) are only courting cheap death and creating employment for grave diggers,” he added on condition of anonymity.

But Moruf Adeyemi, 29, a mechanic in the run-down Lagos district of Obalende, is unperturbed about the potential risks — and is convinced that they aid his performance in bed.

“Each of us has to die somehow. I don’t believe the consumption of these sex-enhancing drinks has any side-effects,” he said.

“My wife commends my performance in bed when I take them and that gives me joy.”