Will ‘Kimye’ be the death of Vogue? | Inquirer Lifestyle ❮ ❯ 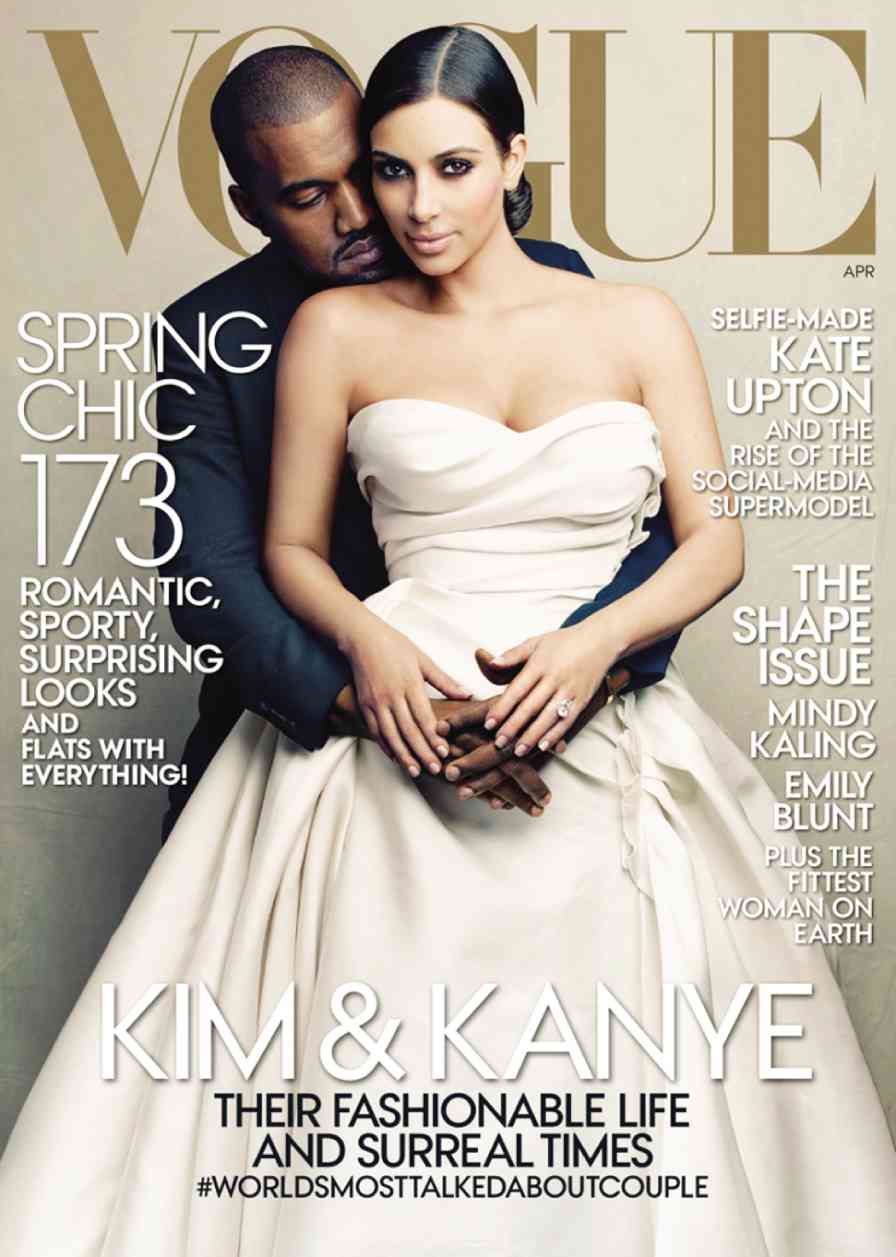 Will ‘Kimye’ be the death of Vogue? 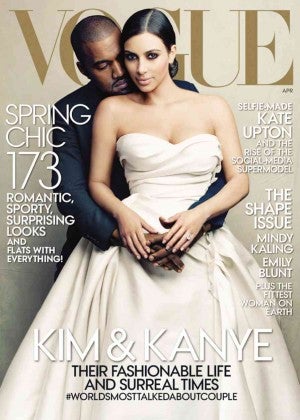 Kim Kardashian and Kanye West couldn’t be happier that they finally got their Vogue cover. As for the rest of the world—not so much.

Did the magazine sell out?

When news broke that Anna Wintour just granted Kim Kardashian’s wish by putting her and fiancé Kanye West on the cover, some thought that this was simply some April Fools’ joke. And when the Internet finally came around to the fact that “Kimye” had indeed landed the cover of the world’s most prestigious fashion magazine, readers did not take Wintour’s decision lying down.

The reaction was instant and vicious. Actress Sarah Michelle Gellar’s tweet, “Well… I guess I’m canceling my Vogue subscription. Who is with me???” was “favorited” and retweeted thousands of times.

And thanks to the magic of Photoshop, retribution against fashion’s elite magazine has been laughable. Celebrities like Seth Rogen and James Franco, and even Kermit and Miss Piggy have swapped out Kimye—fans even deemed such spoof covers a vast improvement over the original.

And despite the bride- and groom-to-be being given the “Vogue treatment”—photographed by famed photographer Annie Leibovitz, and wearing Lanvin and Saint Laurent, respectively, in a mock-wedding photo pose—the outrage has not been limited to Twitter. Vogue’s Facebook page has been flooded with hundreds of seething messages and comments. Said one: “I’m sick and tired of your posts about Kim Kardashian, that’s why I will unlike your page. You were a magazine with a serious status. Now you remind me of Hello! Magazine (which is better ’cause it’s cheaper for what it offers). Go back to designers, artists, actors and models and maybe I’ll re-like you. Tired of D class reality hookers.”

Added another: “Seriously Vogue??? You consider this stylish??? What is happening to Vogue!!!”

The idea of Vogue, and what it represented, is a concept that the magazine invented. Being a reader myself of the magazine for many years, Vogue has a reputation of featuring only, shall we say, in a more polite fashion, A-list stars on its covers. You know, the supermodels, the Oscar-winning actresses, the Grammy-winning singers and pop stars who have graced the covers of Vogue have trained loyal readers to instinctively note what is and isn’t Vogue.

Kimye, most especially Kim, doesn’t exactly fit into these groups. From her sex tape scandal past to her self-promoting present, she’s a vulgar reality show star who basically represents everything that isn’t Vogue. Putting her on the cover, with Kanye peeking from behind, is an obvious branding faux pas.

Question is, did Wintour make the right decision, or will it lead to a mass exodus of dismayed loyal readers?

The criticisms from readers shouldn’t come as a surprise to anyone, including Wintour. If you read Wintour’s editor’s note, she already anticipated the flak, and any rumors of ill will between fashion’s gatekeeper and the talked-about couple have been crushed, according to Wintour’s letter from the editor.

She said: “Part of the pleasure of editing Vogue, one that lies in a long tradition of this magazine, is being able to feature those who define the culture at any given moment, who stir

things up, whose presence in the world shapes the way it looks and influences the way we see it. I think we can all agree on the fact that that role is currently being played by Kim and Kanye to a T. (Or perhaps that should be to a K?)… As for the cover, my opinion is that it is both charming and touching, and it was, I should add, entirely our idea to do it; you may have read that Kanye begged me to put his fiancée on Vogue’s cover. He did nothing of the sort. The gossip might make better reading, but the simple fact of the matter is that it isn’t true.”

While it’s unlikely that putting Kim Kardashian on the cover will put Vogue out of business, it is a prestigious brand that has been around for more than a century. It’s a move that might have not been consistent with the magazine’s branding, but it was a clever, shrewd tactic, especially for a business-minded editor like Wintour.

Kimye have about 30 million combined Twitter followers, as opposed to Vogue’s less than 4 million. In an age when the Internet is killing the print business, Wintour’s move was a strategic one to help the magazine sell more copies, which has reportedly declined by more than 10 percent since 2012.

With all the publicity the cover is getting, Wintour will surely achieve just that.

And after the collective discontent over this issue’s cover, notice that something seems to be changing with the magazine’s cover models—starting with the curvier Lena Dunham, then Rihanna, and now Kim. It’s almost as if these are signs of Vogue’s own way, and Wintour’s, I might add, of adapting to and recognizing that the business model it created in the past is no longer sustainable.

Under Wintour’s direction, Vogue, after all, has featured the likes of The Spice Girls and Britney Spears, and has been angling toward more celebrity-driven coverage for decades.

For those of you who really can’t stand Kim, not to worry. I’m betting that Wintour’s next cover subject will be someone all girls are loving right now—