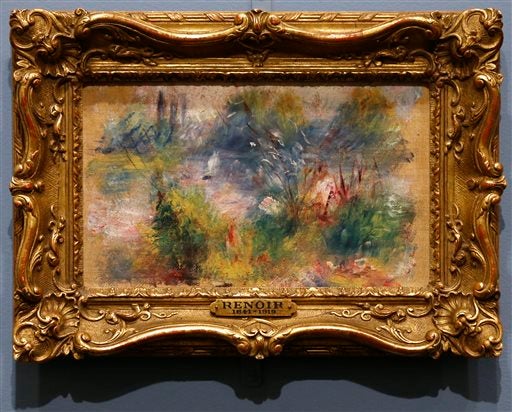 Pierre-Auguste Renoir's painting "On the Shore of the Seine" hangs at the Baltimore Museum of Art in Baltimore, Thursday, March 27, 2014, more than 60 years after it was stolen from the museum. The painting became the subject of a dramatic legal dispute after a Virginia woman claimed she bought it at a flea market for $7. A judge ultimately awarded ownership back to the Baltimore museum, and it is scheduled to go on public display March 30. AP

BALTIMORE — A tiny Renoir painting has returned home to the Baltimore Museum of Art 63 years after it was stolen and then kept mysteriously hidden for decades.

Pierre-Auguste Renoir’s painting “On the Shore of the Seine,” painted about 1879, was unveiled Thursday as the centerpiece of a new exhibition, “The Renoir Returns.” It opens to the public Sunday.

“It’s a moment we’ve been looking forward to,” said museum director Doreen Bolger. “It’s an occasion that is so worth celebrating.”

The painting, just 5½ by 9 inches (14 by 23 centimeters), was uncovered in 2012 when a Virginia woman claimed she unknowingly bought it at a flea market for $7 and then prepared to send it to auction. But others, including her brother, disputed the story. A Washington Post reporter discovered the painting’s connection to the Baltimore museum, and police uncovered a theft report from 1951.

The Renoir became the subject of a dramatic legal dispute involving the FBI, the woman who said she found the painting, an insurance company’s rights to the artwork and the intentions of Saidie May, an art collector who bought the painting in Paris in 1925 and lent it to the Baltimore museum. May later gave 800 artworks to the museum, including many when she died.

In January, a federal judge awarded ownership of the little Renoir to the museum as well.

Senior Curator Katy Rothkopf called it “our little jewel.” As an artwork, the piece is a good example of Renoir’s high Impressionist style and technique with bright colors and expressive brushwork during the late 19th century, she said.

When the painting returned to the museum this year, it needed only a light surface cleaning.

Already researchers have confirmed part of May’s story about the painting — that Renoir painted it on a linen napkin, apparently from his mistress.

“If you get close to the painting, you’ll actually be able to see the weave of that napkin as well,” Bolger said.

The special exhibit will be on view through July 20 in Baltimore. It reunites the Renoir with more than 20 other artworks from May’s collection, which helped shape the Baltimore museum’s holdings.