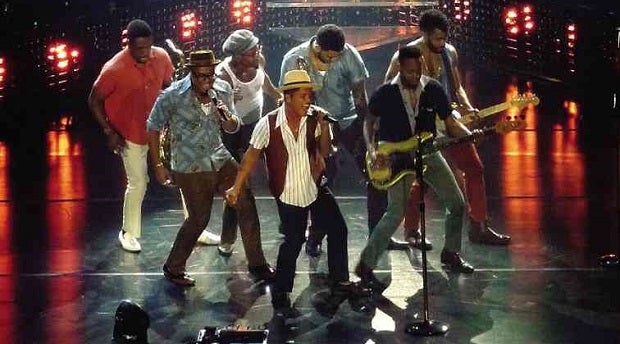 BRUNO Mars and The Hooligans were a blast. JILL LEJANO

Bruno Mars’ time onstage at his Mall of Asia Arena concert last week felt much too short. In retrospect, his work as a singer-songwriter is so awesome that we were just aching for him to sing all the tracks from his two albums (2010’s “Doo-Wops and Hooligans” and 2012’s “Unorthodox Jukebox”), plus the single “It Will Rain” (from the soundtrack of “The Twilight Saga: Breaking Dawn— Part 1.” It was highly unlikely, but fans can dream.

The Manila leg of his “Moonshine Jungle” tour was impressive: a set with light-studded platforms; widescreen monitors acting as a backdrop to his music; and a tight band, The Hooligans, that complemented Mars’ honeyed voice and fancy footwork.

Here’s a look back to the moments that made his performance unforgettable:

Bruno gave a nod to his Filipino roots by addressing his longtime absence: “What up, Manila? We’ve been waiting a long time to come back. You don’t know how much this means to me being a Filipino and coming here to my people.”

Having been raised in Hawaii the “Filipino way,” Bruno was well aware of one of our distinct traits. “Filipinos are known for singing. We’ve got some karaoke singers in the audience tonight,” he said before inviting the crowd to sing along with him.

Then, to his hordes of admirers: “Mahal kita, mahal kita, all you beautiful Filipino women, I’m talking to you, you, you and you,” he crooned while pointing to lucky women in the audience. Bruno’s encore was highlighted by the unfurling of the Philippine flag as he unloaded his drumming skills. His double-encore, which ended with “Gorilla,” was given a Manila-flavored edit, too, with a line from the lyrics changed to, “You and me baby making love in Manila.”

Bruno pleaded to the crowd: “We came to get you all moving, shaking and dancing. Put your camera phones down and dance with us!” He made sure to deliver a set that proved to be irresistible, and it was a waste to experience the concert while holding a smartphone all night just to capture something that was meant to be savored at that very moment.

Bruno loves his band, The Hooligans, and it showed in the way they grooved together and played beautifully. He was also quick to acknowledge the talents of each member, from backup vocalist Philip Lawrence, to drummer (Bruno’s brother) Eric Hernandez.

Bruno’s got sick moves! He totally owned the stage, shaking his hips and gliding all over as if the stage had oil poured on it. He and The Hooligans even did a little beatboxing with their feet, stomping simultaneously to the music’s rhythm.

Adding more fun to his act, Bruno injected cool mashups of “My Boo,” “Ignition” and “Love You Down” into his own songs.

“Moonshine,” “Grenade,” “Marry You,” “Billionaire,” “The Lazy Song,” “Treasure,” “Locked Out of Heaven,” you name it, he sang it, adding a bit of trivia to some numbers, like why was “When I Was Your Man,” by far, the hardest song for him to write and record.

The Moonshine Jungle tour was named as such because the show swayed with reggae beats and an earthy rhythm with a Cuban flavor. It was retro music with a contemporary twist, an homage to doo-wop (“the first kind of music I listened to,” said Bruno), disco and other genres that have shaped his sound.