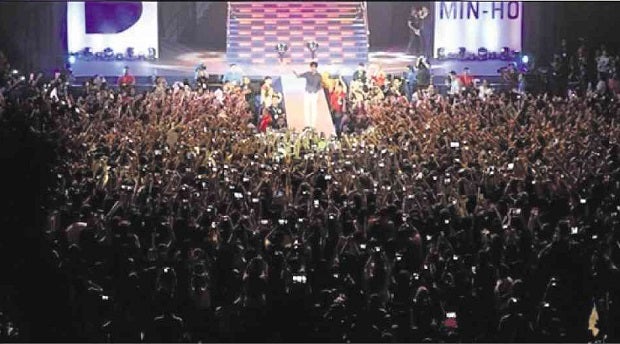 Lee Min Ho looked like he just stepped out of the TV screen.

That was the first thought I had when he walked towards me backstage at the recent Benchsetter Fun Meet at Smart Araneta Coliseum. Why? He still sported his hairstyle from “The Heirs”—short at the back, straight bangs across his eyebrows, exactly how Kim Tan, his character in the romantic comedy series, looked like.

He walked with a smile on his face. He wore a blue long-sleeved polo shirt, the sleeves folded right below his elbows, with crisp, fitted white pants and brown loafers. He was every inch ready to be photographed.

I raised my arms to take a snapshot, my left hand clutching my camera phone and my right holding my point-and-shoot. Suddenly it felt like I was in a scene straight from a Koreanovela. His eagle-eyed bodyguards saw me and quickly covered the lenses of my cameras with their hands and bodies.

Too many times I have seen similar scenes on TV—the bodyguards always in black, no matter the temperature. They step out first, press their corded earpiece closer, and surround their client protectively.

I used to think that those scenes were exaggerated for TV until I experienced it myself. Only this time, my camera phone was the threat that they had to protect Min Ho from.

Those bodyguards, or bouncers, knew their jobs well. The only backstage

photos I have from that day are of hands, the floor, and the blurred back of Min Ho.

After losing to The Suits, I made my way to the crowd.  But before I could step out of the stage area, a girl with no event ID tugged at my shirt.

“Ate, nakalabas na po ba si Min Ho?  Gusto ko po kasi sanang magpa-picture kasama siya. Isang picture lang po (Has Min Ho left? I was hoping to have a photo with him. Just one picture),” she said. It was a risky move because talking to me raised too much attention to herself. The bouncers promptly asked her to leave.

Earlier, another fan approached me when she saw my media pass. She asked if I could help her get to the all-access area. She was on her own but entered the venue with a group of girls she did not know. She befriended them so she could get ahead in line. She went on her own again when she saw a closer spot. It became apparent that, in this kind of event, it was every woman for herself.

The guys in the crowd, I assumed, were there as willing chaperones for their girlfriends, sisters, or daughters. Min Ho is one of the few

Korean male stars who also appealed to straight men. He won them over with the action series “City Hunter.” The girls he enthralled a long time ago as Gu Jun Pyo in “Boys Over Flowers.”

I finally found a spot at the side of the stage. It was

difficult to hear the first few parts of the conversation

between Min Ho and host Sam Oh. The fans were screaming their lungs off.

Min Ho charmed everyone with his wit. He asked Oh to teach him a few Filipino phrases. He chose the most common yet thrilling words that sent them over the edge, such as “Mahal ko kayo.”

Some pre-selected fans joined him onstage. They got to pick rewards from two boxes labeled “So In Love” and “Sure Blue,” the two perfumes that Lee is endorsing for Bench. The rewards were

either a hug or a selfie with the star. After two or three hugs, Min Ho said he would like to change the mechanics of the game.

He asked the next fan who won a hug to walk from the end of the stage. They slowly met in the middle before locking in a tight embrace. The fans were tickled pink.

Again he was barely heard amid the nonstop screams as he started singing “Painful Love.” The song is in the soundtrack of “The Heirs.”

I hurried backstage to wait for him to return to his dressing room. Alas, he was still flanked by his burly bouncers. They started waving at me frantically to drop my camera as they moved forward.

Fans who had the all-access pass soon followed. But Min Ho’s bodyguards pushed them all back. There were sounds of begging and whining.

I got out of there before things got out of hand. Outside, I saw some of the fans sitting on the side of the street. They looked like they were finally feeling tired from all the fuss. Some had come from the provinces and as far as Indonesia to be part of this event.

But they were still smiling, happily chatting with their friends about the excitement of seeing a larger-than-life Min Ho, in the flesh, just a few minutes ago.