Monique Wilson: ‘Art and activism are the lifeblood of my work’ | Inquirer Lifestyle ❮ ❯ 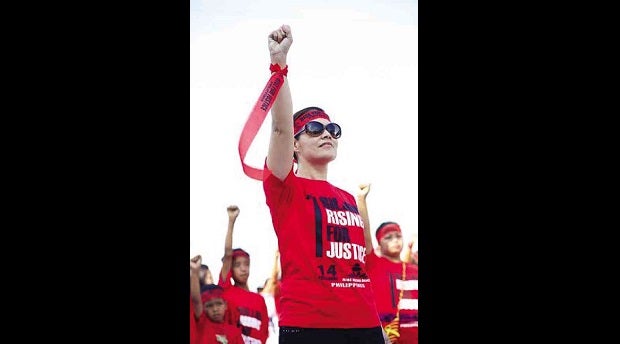 Monique Wilson: ‘Art and activism are the lifeblood of my work’

Monique Wilson is an extra-busy woman these days.

A few days after arriving from New York, she was in Tacloban to lend a hand to relief efforts for victims of Supertyphoon “Yolanda.” Then she was off to Kidapawan, Cotabato, for another activity related to her longtime advocacy of women’s rights and social justice, which would also see her visiting the displaced sakada of Hacienda Luisita and documenting their plight.

By her own admission, her involvement in “One Billion Rising,” a worldwide campaign founded by playwright Eve Ensler (“The Vagina Monologues”) that seeks an end to violence against women and girls, was her way of lobbing wake-up calls at the government to direct more help to typhoon victims and to address injustices committed especially against women.

For the restless farmers of Hacienda Luisita in Concepcion, Tarlac, Wilson sang “Sun and Moon,” a song from “Miss Saigon,” the show that took her to London to play the bar girl Kim at 18 years old, alternating with Lea Salonga. It has been a gradual but determined change in outlook for Wilson, from her youthful awakening to social issues to the current high noon of her days as an activist, which finds her singing a “Miss Saigon” song while telling farmers to stand up for their rights.

Her hacienda performance summons to mind the activism of her favorite actress, Vanessa Redgrave, who is known as much for her politically outspoken views as for her sterling work in theater and film.

While Wilson was in London doing “Miss Saigon” and afterwards taking up advance studies in theater, she met the great Redgrave, who was once proclaimed by playwrights Arthur Miller and Tennessee Williams as “the greatest living actress of our time.”

“Apart from being one of the world’s best actresses, Redgrave was and still is a fierce, principled political activist… I had the immense honor of working with her in London in 1991 when I was 21 years old and doing ‘Miss Saigon,’” recalls Wilson.

“I wrote her a five-page letter telling her about how she inspired me and about how I wanted to be a political activist/actress like her. She invited me to perform with her in a political concert she was staging. A theatrical moment shared with her I will always cherish to this day. No wonder that my favorite movie when I was just 7 years old was ‘Julia.’ I  was swept away not just by the amazing acting of Vanessa and Jane Fonda, but also because of the political passions and convictions I witnessed in the film.”

(In “Julia,” based on a chapter of Lillian Hellman’s book “Pentimento,” Redgrave played an anti-Nazi activist, a role that won her an Oscar for best supporting actress.)

Fonda also became her friend when they did a tour of Ensler’s “The Vagina Monologues,” a play that has been staged many times by Wilson’s New Voice Company not only in Manila, but also in Hong Kong and Singapore.

“Redgrave and Fonda are indeed two amazing women. Both are critically acclaimed actresses and political activists who sacrificed their careers for their political beliefs. I have had the profound honor of meeting and working with and learning from them. I’d like to think there are no coincidences in life. Moments connect for particular purposes … to open paths, possibilities and roads toward awakening and serving,” says Wilson.

Wilson was only 9 when she debuted on stage as one of the orphans in a Repertory Philippines production of “Annie.” She was also cast as one of the seven children in “Sound of Music,” along with Menchu Lauchengco-Yulo, Raymond Lauchengco, Risa Hontiveros (yes, the former party-list representative) and Salonga. Many years later, Wilson would find herself graduating to the part of Maria in a Rep revival of the classic musical.

From her first days with Rep to her stint in London doing “Miss Saigon” to coming home to organize New Voice Company to relocating again to London to finish her studies and work as an acting teacher, Wilson has spent a total of 34 years in the theater.

She counts a number of what she calls “transformative moments” in her life, and one of them was when she attended the University of the Philippines Diliman as a theater

“My classmates from the grassroots exposed me to life outside of what I knew,” she recalls.

Another highlight was when she founded New Voice Company, which would blaze a trail in local theater by producing fresh, provocative fare such as “Oleanna,” “Angels In America,” “Chess,” “Top Girls,” “My Sister In This House,” “The Vagina Monologues,” “Cabaret,” “Aspects of Love” and  “The Good Body,” to name a few.

She feels that mounting these political and often feminist plays allowed her artistic life to expand.

“I had a dream to create and mount theater that could educate, awaken, inspire, transform and incite people to action. I learned a lot from these socially provocative plays,” says Wilson.

The biggest highlight of her theater life was bringing “The Vagina Monologues” to the Philippines and eventually meeting its playwright, Eve Ensler.

“It was not until year 2000, when we produced ‘The Vagina Monologues,’ that the personal became political [for me], where my own personal transformation and empowerment into a more socially and politically engaged individual harnessed and influenced my artistic work on a deeper level. Years of doing all these with Gabriela and the grassroots women’s movement deepened my understanding of both women’s and national issues, which then began to profoundly affect my career and artistic choices. ‘One Billion Rising’ became a natural development from this, as art and activism have become the lifeblood of my work both as an artist and as a political activist.”

Wilson’s feminist bent also found a kindred spirit in Ensler, from whom, she says, “I have learned deeper love, deeper understanding, deeper compassion about people and the world; about taking in what you see and experience, the suffering, the pain, the stories of the people, and to open your heart completely to that which changes you, which then affects what we choose to do in this world—with our art, with our life.

“She has taught me what being in service to changing the world for women and girls really and truly means, of what our function is as both artists and activists, which is to bring the truth to a wider platform… She taught me that there can be poetry in revolution, that there is always light where there is darkness. She taught me to insist on hope even amidst sorrow, and to keep seeing the future and believing in it—where there will be no more violence—and to hold onto that vision as the fire burning in our hearts in the work that we do.”

Those words are from her acceptance speech following the recent awarding to Wilson of the Hildegard Lifetime Achievement Award, given by St. Scholastica’s College “to celebrate women’s achievements in the mass media and its allied fields.”

Recalling the year she watched a Rep production of “The Diary of Anne Frank” at age 3, Wilson then left her audience with impassioned words on the responsibility of the artist to help change society for the better—the singular vision that has since guided her art and life.

“I remember two things very vividly. One, that I was being forced by my dad [the late actor Johnny Wilson] who worked for the Marcoses as vice mayor of Makati City to greet then President Marcos and his wife. Two, that I wanted nothing more in the world than to act and be like the people I saw onstage. It wasn’t also a coincidence that it was a play about a young girl finding some humanity in the brutality of the Holocaust. I’m pretty certain my love for theater began there, and so did my appreciation for justice—though at that time I neither had the words nor the wisdom to describe it.

“Thirteen years later, when I performed the part of Anne in the same play with the same theater company, I remembered that evening when at 3 years old I was introduced to theater. At 16, I now thought— if someone so young could articulate something so eloquently and affect those who shared in her story, then so could I. I felt the first weight of responsibility as an artist then—the gravity of bringing the story of Anne Frank to audiences with clarity and truth—so that it may be a learning experience for them rather than just an entertaining evening at the theater.”