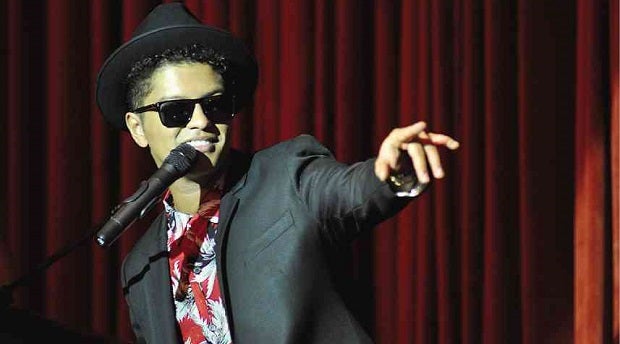 “I’M REALLY excited to be back here in Manila,” says Bruno Mars. PHOTO BY JILL LEJANO

We won’t deny it—we’re all kinda in love with Bruno Mars.

And the day before his sold-out Manila concert, he gave us one more reason to love him.

The pop superstar showed up at Solaire’s Eclipse Entertainment Lounge to present ABS-CBN Ling-kod Kapamilya Foundation’s Bantay Bata 163 with a check for $100,000 to benefit young survivors of Supertyphoon “Yolanda.”

“Last 2011, Mr. Bruno went to visit the children of Bantay Bata and, after he sang, he promised that he would come back to the Philippines. And I’m happy that he came back, not just for his fans, but also for the kids of Bantay Bata. We really wanted to thank him and tell him that his donation would go a long way,” said Dr. Luisa Puyat, program director of Bantay Bata 163.

Puyat said the foundation would use the donation for scholarships of those orphaned by the typhoon. “We will use it for our medical and feeding program, our posttraumatic stress debriefing, child emergency care and our new disaster preparedness program for children,” she added, “because we never know when the next calamity will happen.”

Tina Monzon-Palma, Bantay Bata consultant and spokesperson, said Mars’ donation would go a long way in helping the children. “In case he finds time between his concerts,” she said, “we can Skype and show him the kids that he would be helping and that he helped, and that maybe the kids in the Yolanda-affected areas (could) say thank you personally.”

Bruno Mars was with the members of Poreotics, the Asian-American all-male dance crew that fans remembered from “The Lazy Song” music video. Armed with the ape masks made popular by the music vid, Poreotics performed for the media and Bantay Bata 163 board members.

“Till this day,” Bruno Mars said, “the ‘Lazy Song’ is my most successful video, thanks to these guys. It is also the cheapest to make; I really appreciate that. Thank you guys.”

Bruno Mars is no stranger to charity, supporting organizations and projects like the Red Cross, Hilarity for Charity, Make It Right, In Their Shoes, Artists Project Earth, Musicians On Call, and Candie’s Foundation.

“I’m really excited to be back in Manila,” he said. “It was one of the most special moments in my career, coming here a couple of years ago and playing a sold-out show with my whole Filipino family watching. I’m really happy to be here, guys. I promised I’d be back, so here I am.”

Seconds later he moonwalked on the stage as the crowd cheered.