From subject to staging to star, ‘Full Gallop’ is entrancing | Lifestyle.INQ ❮ ❯ 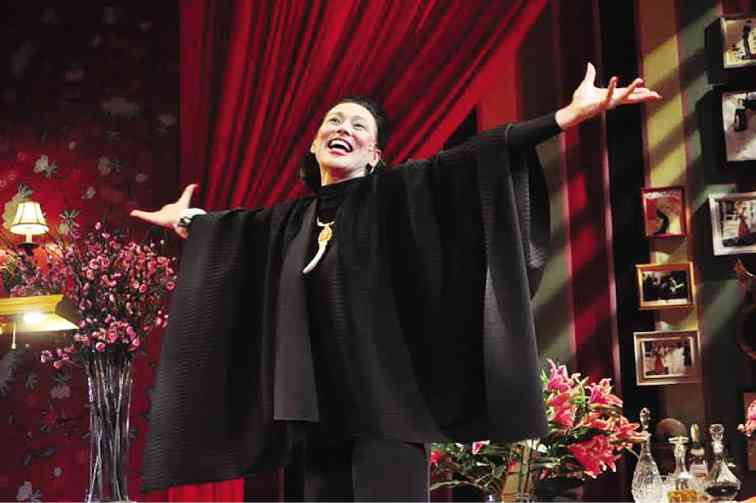 CHERIE Gil as Diana Vreeland was a challenging role to play, with endless lines and no other actor to share the stage with. ERICKSON DELA CRUZ II

From subject to staging to star, ‘Full Gallop’ is entrancing

The real Diana Vreeland loved being under the spotlight and to hold court. In her old age, she talked slow, so you really had no choice but to hang on her every word. In her column for Harper’s Bazaar, where she served as fashion editor, she loved giving outrageous suggestions like, “Why don’t you … wash your blond child’s hair in dead champagne?”

She was excessive. There was no stopping her imagination— and her spending. The latter, ultimately, led to her unceremonious firing as editor of American Vogue at the age of 68, after nine years of service.

End of an era?

It was this Vreeland whom we met in “Full Gallop,” a one-woman play originally staged as on off-Broadway production in 1995. The Manila production was directed by Bart Guingona and starred Cherie Gil, who has had her fair share of playing luxurious and excessive contravida characters in Filipino movies.

Vreeland went on a six-week holiday in Europe following her termination. In contrast, when Vogue editor Margaret Case lost her job, she jumped to her death. At the start of the play, Vreeland was busy preparing dinner for a potential financial backer.

By “preparing” we don’t mean sweating over a cooking range. She had her French maid, Yvonne (voiced by Giselle Toengi), to worry about that. For Madame was not a domesticated goddess—she didn’t even know where her kitchen was, genuinely shocked to find out that it’s all white.

In her elegant room, which was marked by a thick red curtain hanging from the high ceiling, red walls, red couch and a chair covered in a confounding red fabric (“so Vionnet”), she took phone calls, gave instructions to the maid through an intercom, and accessorized the room with six vases overflowing with flowers (which she asked her maid to spring for because she has only $2 in her bag).

If you thought her living room could not look any more sumptuous, you should watch Vreeland amp it up with flowers.

The phone calls were from friends alerting her about a gossip item in the New York Post about her return from Europe and how her loyal friends were scrambling to find her a job. She read it piecemeal, entertaining the audience in between with tales from her adventures and pronouncements like “navy blue is the pink of India.”

There was also an offer from the Costume Institute of the Metropolitan Museum (“Why is everyone trying to put me in a museum,” she quipped), which she at first declined. As the play progressed, she slowly realized that the clout she used to enjoy as a magazine editor was dissipating. One of her dinner guests left for Istanbul without telling her, her florist started charging her and her go-to restaurant stopped giving her a hamper of goodies. Her son asked her to move to California since now she couldn’t afford her New York apartment.

Was she becoming irrelevant? Or was it, as the New York Post suggested, the end of an era?

Fans of society pages and the world of fashion would enjoy this play about the visionary that was Vreeland, whose ideas were so wildly original that, until now, the best editors and stylists still reference her.

Cherie Gil was a gem and played the role almost perfectly, down to the perfectly placed hand on the right hip, which was how the fashion editor appeared in many photographs. Gil was also an elegant presence on stage, especially when she danced a tango on her own and recounted having Coco Chanel as dinner guest.

To be sure, this was a challenging role to play, with endless lines and no other actor to share the stage with. We wished Gil spoke more languidly and acted more excessively, with a hint of crazy, to enthrall the audience even more.

The script, by Mark Hampton and Mary Louise Wilson, was snappy and managed to turn Vreeland’s ramblings and non sequiturs into entertaining quips. Though you don’t need to be a fashionista to appreciate Diana Vreeland’s story, it was sheer joy to those who are, as we witnessed during the preview night for media attended by lifestyle reporters and editors.

But if there was anything that people would be talking about long after the curtain had dropped, it was the set design of Joey Mendoza, which was so exquisite it’s worth its own story.

The takeaway from this play, which Guingona did not overemphasize but instead left the thinking audience to discover after the show, was how Vreeland, who was depicted as an impenetrable, strong-willed character in most stories written about her, was captured at a rare point in her life when she felt vulnerable.

Despite appearing to be above mundane daily concerns such as paying bills and making rent, she had cunning and a strong survival instinct, as viewers would find out at the end of the play.

The author is editor of manila.coconuts.co, where this piece originally appeared in slightly shorter form.