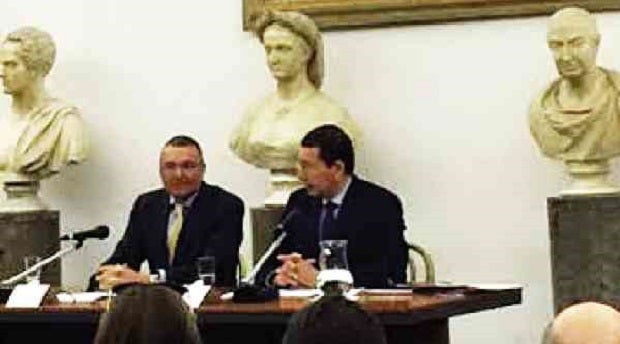 Luxury brand Bulgari has signed an agreement with the City of Rome to donate 1.5 million euros to renovate the Spanish Steps, the landmark that has drawn millions and millions of tourists to the Italian capital the past century.

The project is Bulgari’s tribute to Rome, where the founder of the jewelry brand began his enterprise more than a century ago. The effort is also Bulgari’s significant way of celebrating its 130th anniversary.

The renovation project is the first in the 21st century for the Spanish Steps. It seeks to restore to the old splendor of one of Rome’s most famous monuments and also one of the most symbolic places in the history of the Italian jeweler. The Spanish Steps provide a spectacular backdrop for Bulgari; jutting out from it is the Via dei Condotti, where the Bulgari store is now located.

Jean-Christophe Babin, CEO of the Bulgari Group, says: “We are proud of this agreement with the City of Rome which will allow us to ‘adopt’ the Spanish Steps. They lie at the heart of our story, between Via Sistina, where Sotirio Bulgari opened the first Bulgari shop in 1884, and our present shop in Via dei Condotti. The majestic beauty of this unique city and its rich archaeological, artistic and architectural heritage have always been an inexhaustible source of inspiration for our collections. Because of this, Bulgari, to mark its anniversary, has chosen to pay a special tribute to its home with the reopening of the historic boutique in Via dei Condotti and the extraordinary patronage of the renovation of one of the capital’s most iconic architectural jewels.”

In a ceremony at Rome’s City Hall, witnessed by members of media from various countries, Rome Mayor Ignazio Marino   thanked Bulgari “for their wonderful generosity, and not only today, to our city and to the treasures, both historical and artistic, which make her unique. We will be able to return the Spanish Steps to their original beauty, thanks to Bulgari that has chosen to invest in this ‘planetary jewel.’ A strong and lasting bond links Rome to Bulgari, so it is sincerely that I wish the company many happy returns on its 130th anniversary.”

Designed as a theatrical link between the slopes of the Pincian Hill, dominated by the church of the Trinità dei Monti, and the Piazza di Spagna below, the monumental Spanish Steps were built between 1723 and 1726.

At the end of the 19th century it was a favorite meeting place of the fashionable and elegant crowd. There, Sotirio Bulgari opened his business as a silversmith when he arrived in Rome. He was a migrant from Greece.

For nearly four decades, the Spanish Steps linked the three Bulgari stores. In  1923 Via dei Condotti No. 10 became the only store in Rome with the stairway keeping an aesthetic role, linked to the image of the Italian jeweler.

Now part of the LVMH Group, Bulgari was founded in Rome in 1884 as a jewelry shop which quickly gained renown for Italian excellence, exquisite craftsmanship and magnificent creations.

Bulgari is now a global brand, with a diversified line of products and services, from fine jewels and watches to accessories and perfumes, with an unrivaled network of boutiques and hotels all over the world.