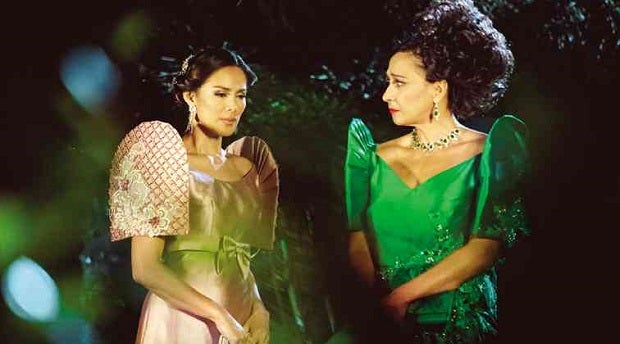 But it has one element other “teleseryes,” as TV soap opera series are sometimes called, don’t have that required ABS-CBN to tap the expertise of leading costume designer Eric Pineda and veteran hair and makeup artist Ruben Nazareth: an epic story pitting wealthy hacienderos (landlords) with dirt-poor sacadas (sugar farmers) that spans three decades.

Inquirer Lifestyle gets an exclusive peek as the production, led by director Malu Sevilla, shoots a big outdoor scene in chilly Tagaytay set in the early ’70s. A wigged and tuxedoed Jake Cuenca (Franco Hidalgo) publicly proposes to Kim Chiu (Isabel Miravellez) during a welcome party hosted by his rich and powerful parents.

Without saying a word, a confused and surprised Isabel rejects the proposal and walks out of the party, leaving behind a devastated Franco and the engagement ring lying on the dance floor. The rich girl’s heart obviously belongs to someone else, and it doesn’t take a psychic to guess that it beats for Coco Martin (Samuel Severino).

“There have been period productions on TV before, but nothing has been done on this scale,” said Pineda, who started his career under the tutelage of the late costume designer and National Artist Salvador Bernal. “The most they did were flashback scenes that aired for one to two weeks.”

After all, “Ikaw Lamang” is set entirely in the past—from the early ’60s to the late ’80s. Although Pineda, 49, only came of age in the early ’80s, he was able to immerse himself in the past through research and firsthand accounts of hacienda life from his mother, a former payroll officer in the Cojuangco family’s Hacienda Luisita in Paniqui, Tarlac.

This time, the story happens in a fictional farm called Hacienda Salvacion. Although not stated in the story, it’s implied that the hacienda is located somewhere outside Bacolod.

For the longest time, Deo Edrinal, ABS-CBN business unit head, has been asking Pineda to join the Kapamilya network in one of its projects. Because of his killer schedule, Pineda was unable to make any commitments until “Ikaw Lamang” was offered to him late last year.

It was one of those projects that Pineda found too good to refuse. At the same time, he wanted to make a point that productions of this scale and ambition need someone like him like they do in the US, where even films set in the here and now have costume designers.

All these years, costume design in the Philippines has yet to spin off from production design to become a separate department. Pineda hopes all that would start to change with his involvement in “Ikaw Lamang.”

“I have a great deal of respect for our stylists and the guys at wardrobe,” he said. “That’s why I didn’t want to encroach on their turf by working on a teleserye with a modern setting.”

Rising to the challenge

This time, it was different. Not only was the project’s scope huge, Edrinal’s offer would allow Pineda and his team to be “a department unto ourselves.” Even if it meant not getting enough sleep for several months, the designer rose to the challenge.

“As a costume designer, I feel that it’s my duty to show the audience what’s correct,” he said. “It’s impossible to be 100-percent accurate, but I try my best since shooting started two months ago to achieve a sense of heightened reality.”

And unlike before when it was acceptable to rework a costume to save on time and money, this time Pineda and his team have to always come up with something new, especially for big scenes involving “Ikaw Lamang’s” rich characters.

“In the age of Facebook, YouTube and Instagram, tweaking a costume while hoping that viewers won’t notice no longer works,” Pineda said. “Not only are ABS-CBN shows seen all over the Philippines. Because of TFC, they’re now seen by countless Filipinos the world over.”

Feedback is also instantaneous. Some fans even go to the extent of taking pictures of what the stars wore and posting them on social media. Within a day or two, fans also begin posting recent episodes of their favorite teleserye on YouTube.

“People can be quite scathing with their comments,” he added. “More than feel offended after being found out showing a reworked costume, I’d probably be more embarrassed.”

It was also a reunion of sorts for Cherie Gil, who played one of the young adult children in “Oro,” and Nazareth. This time, Gil plays Doña Miranda Hidalgo, the clan’s flamboyant matriarch and one of “Ikaw Lamang’s” resident villains, who makes life difficult for poor boy Samuel and his mother (Cherry Pie Picache).

For the larger-than-life Miranda, Pineda and Nazareth channeled the “composite” looks of real society women such as Imelda Cojuangco, Elvira Manahan, and Bacolod-based socialite and Kahirup Ball-regular Nellie Lovina.

“I also based Cherie’s hair, especially during later episodes, on Imelda Marcos,” said Nazareth. “This time, it’s a fictional Imelda who goes to Paris.”

While Miranda gets to wear Salvacion Lim-Higgins-inspired gowns in bright colors, the docile and suffering Rebecca Miravellez (Angel Aquino) is dolled up in classic-looking ternos reminiscent of those fashioned by Ramon Valera.

“Since she is prim and proper, I based her look on a combination of Gretchen Cojuangco and Jackie O.,” said Pineda. “Rebecca also gets to wear gowns in softer colors.”

Borrowing period gowns and ternos crossed Pineda’s mind. But the designer had second thoughts soon after he realized that the risks were far too big for him to handle.

“I can’t risk losing a friend or two should those authentic and fragile Valera and Slim gowns get permanently damaged during shooting,” he said.

Nazareth is using a collection of wigs and hairpieces made of synthetic and human hair. For shoots lasting the entire night, wigs made of impervious synthetic hair are better, he said.

But wigs made of human hair, which can be curled or straightened depending on the required look, are still more versatile and natural looking.

“Sometimes, we mix both for a more heightened but realistic look,” said Nazareth. “You have to be very careful in choosing your material, especially for wigs made of synthetic hair. But this time they worked well because stiff hair was all the rage in the early and mid-’60s.”

Nazareth and his collaborators, including seasoned hair and makeup artist Warren Munar, steered clear of iconic looks such as one-line eyebrows and outrageous eye makeup in favor of more subtle looks “for TV purposes.”

“One line eyebrows were mostly sported by young models in the early and mid-’70s,” he said. “Since Angel and Cherie are playing mature women, they already have established looks. Instead, we decided to play with the hair.”

After living in New York for 19 years, Nazareth came home three years ago to spend more time with his family. He was also cocooned most of the time with good friend Helena Guerrero in her Mangenguey resort in northern Palawan.

The resort’s temporary closure after it was damaged by Supertyphoon “Yolanda” sometime in November forced Nazareth to spend more time in Manila and Batangas. While in the middle of a Christmas family reunion, he received a call from Pineda inviting him to be part of the project.

“It was an invitation from Eric so how could I say no,” said Nazareth. “At the same time, I felt it was high time I go back to what I really like doing.”

All these years, Nazareth never stopped researching and getting into the flow of things. He continued cutting hair and doing friends’ hair and makeup while in New York and later in LA. He also immersed himself in old movies and photographs while in the US.

“Aside from being true to the period, Ruben and I have come up with looks that instantly tell viewers something about each character,” said Pineda. “As the late Audrey Hepburn wrote in a foreword for a book, if clothes make a man, costumes make an actor. They should also be able to help move a story.”