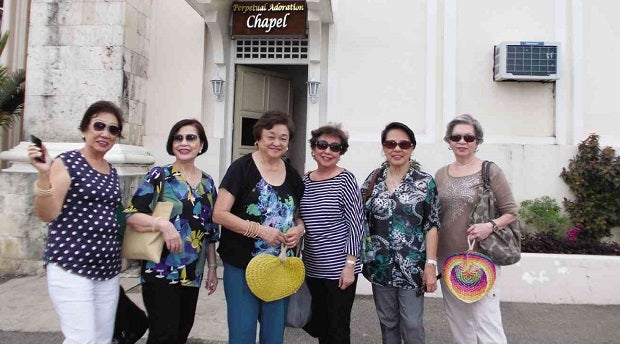 Why these seniors still attend their class reunions

March, the month of graduations, is about the time we seniors—in age, that is—mark our own milestone alumni homecomings. And for our own diamond high school jubilee, my balikbayan classmates are busy preparing for a trip home.

It’s been 60 years, and with the prospect of 30 of us coming, our homecoming promises to break all records of attendance, at least for diamond classes of St. Theresa’s College, Quezon City, where we graduated in 1955.

For a class to be able to hold itself together after all these years, there has to be a leader—the critical link—and for us it’s always been Fanny Chua Ti Lu. She keeps the home fires burning for us, so to speak, such that, no matter how long it’s been since leaving school, it still feels important for us to come home.

For our contemporaries from other schools, campus memories and homecoming traditions are no less treasured, and here are some of those nostalgic voices:

“One thing about reunions, you can’t really say that when you’ve been to one you’ve been to all. In earlier reunions, say 25 years after high school we were mostly curious and interested in how we all had fared in life. Our recollections are spiced with vignettes of wholesome fun and misadventures. How come we remember most the naughty ones in class?

“Through the years we have realized that we’ve been growing closer to each other— what with more reunions, lunches, trips abroad and celebrations of milestones. The bond has become stronger, and the friendships deeper.

“I continue to attend reunions and homecomings because it’s there that friends continue to rediscover one another. As we grow old and mellow, we look at each other with unabashed affection. And, in our heart of hearts, we can only be grateful to God for this rarest of gifts—the gift of friendship.”

“I’m from Class ’56 and ’57, because I failed (the reader ought to be warned, JM is only half-serious when he’s not half-joking), but now both classes are claiming me. But I hang around with about six guys from different years, sometimes with guys from even two years below. You know me, I’m friends with everybody. With classmates of ’57, we’re usually a bigger group, 20-25. And now that we’re older we meet more often, usually in Rockwell—one has just passed away, one is sick. We meet with those who can still come.

“Going to homecomings can sometimes be overwhelming. I prefer meeting regularly, every two months, and in smaller groups. I always find it amazing how some have remained the same while others have been transformed beyond expectations—one, a non-doctor, has become so knowledgeable about diseases he’s already diagnosing and dispensing advice, and even more amazing, I find myself falling for it.

“We also do fundraising for civic projects as they arise relevantly, like for victims of Supertyphoon ‘Yolanda.’ People prefer cash donations. It’s a mess to sort out old clothes, like ukay-ukay. Some are inappropriate, you know, long gowns and high heels. Sometimes we come together to help out one of our own who’s going through hard times. It happens, you know.

“I spent four of my formative years in Maryknoll High, under the tutelage of American nuns. And those were four happy years, liberating and inspiring, and certainly instrumental in making me the person I am today. I’d say it was probably the best time for any young girl to grow up.

“I moved on to other schools after high school, and learned more lessons from those institutions, but I’m convinced that none of them made the same impact on me as those four years. The friends I made then are the friends I cherish today. Somehow there’s a special bond between us that neither time nor absence can cut.”

“Twenty to 24 of us meet every quarter of the year, some of us also every last Monday of the month, usually in the boardroom of Noel Campos’ office in Legazpi Village.

“We chat, mostly reminisce, but most of all we like to get involved in civic projects. Our main men in those undertakings are Bobby Paterno, our high school class valedictorian, Bobby Tañada, and Totit Olivares, who get things done. I’m just the guy who gets people together.”

“We just celebrated our diamond jubilee with seven of us in attendance. That’s a good number, considering we had decided so late to attend.

“There are very few of us left, and we seldom have reunions anymore. But when we do—usually when a classmate comes from abroad – the bond is revived. We’ve always held our reunions in my house. They organize, I host. We’ve kept our friendships all these 60 years, but now conduct it mostly by e-mail. We update one another about health, family, projects in mind or anything that may serve as a reason for another reunion.

“Ours was a small school. We had only two sections and everyone knew each other; even our teachers were like friends. Whenever I think of life’s cherished friends, my four happy, growing-up years in St. Theresa’s come to mind.”

“Our class started its first year in 1948, among the quonset huts of the Padre Faura campus. Some time during our senior year, the whole high school transferred to the new Loyola Heights campus, and ours was the first class to graduate there.

“In 2002, we celebrated our golden jubilee. To mark it we launched a four-volume collection of selected writings by Filipino Jesuit Horacio de la Costa; I was tasked to edit and compile it. The class also donated a life-size statue of Father De la Costa by the recently named National Artist Sajid Imao, erected in front of the hall named for the father. Imao also did a bust of de la Costa for the Loyola School of Theology, which he had founded.

“In 2006, High School ’52 and College ’56 banded together to celebrate our Golden and for another project. Totit Olivares spearheaded it for us. In cooperation with Gawad Kalinga’s Tony Meloto, we built  17 houses in Brookside, Quezon City. And we don’t stop there, we continue to assist the beneficiaries by providing scholarships for their children.

“Since my high school graduation, I have hardly missed an alumni homecoming, which is not quite typical; but then my relationship with my alma mater, St. Paul College of Manila, is not quite typical. I was a student here for 10 years and a teacher and administrator for 30, and after some years in another school (Colegio San Agustin, Makati), I’m back in St. Paul as a consultant for alumni affairs and institutional communications. I therefore have thousands of reasons for coming home: the old Sisters (the few who have not yet crossed the Great Divide), my classmates, my former co-teachers, and my students (who in 30 years are definitely in the thousands).

This year, we were the diamond jubilarians, but unfortunately most of my classmates opted not to dance anymore (“The spirit is willing but the flesh is weak”). A number of us did attend the homecoming, posed for a picture in front of the beloved Chapel of the Crucified Christ, and, with misty eyes, sang the Paulinian Hymn, which ends with, ‘The hopes that heaven brings, thou dost unfold to me.’

“That last line transports us to a time when friendships were pure, life simple, and hopes high. Whether ‘the hopes that heaven brings’ were fulfilled or dashed does not matter, for to paraphrase the poet, Tennyson, it is better to have hoped and lost than never to have hoped at all.”

College of Medicine, University of the Philippines, ’62

“The most memorable homecoming would be our Golden, in December 2012. The gala celebration was in Shangri-la Hotel. And a UP Medicine Class of 1962 reunion in Polo Club was hosted by classmates for the balikbayan. Our class also spent five days in Bohol’s Amorita resort. With my wife, Lydia, I have attended all our reunions, which come every five years. And for many years now, our class has been undertaking medical missions in Bukidnon.

“I enjoy attending our reunions because these help maintain the bonds forged in medical school. As a small class of 106 members, we became very close and treated each other as brothers and sisters. I’m able to keep abreast of their personal and professional lives. We share a website that keeps us in touch. For projects, we have renovated the Philippine General Hospital lobby, built a Student Lounge in the College of Medicine, and set up a UP-PGH museum.”