Borgy and Georgina are back; others are off–again | Inquirer Lifestyle ❮ ❯ 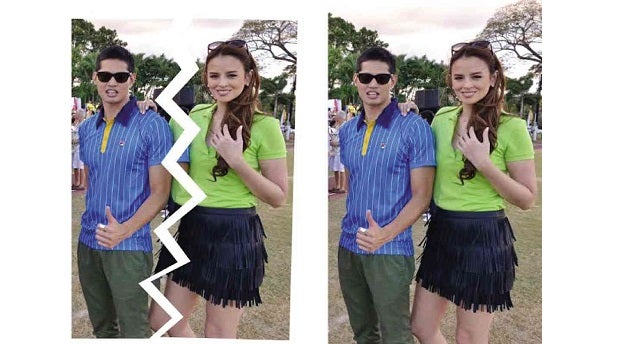 It’s time for my monthly Sweet and Sour, palangga, so let me start with this truly sour note.

There is this impostor who has opened Facebook, Instagram and Twitter accounts under my name. I have never had an account in these social media sites, and I still don’t have. This impostor will be discovered, and will be exposed.  Please delete this person from your account and spread the word to friends to do the same. Thanks, palangga.

Now for some sweet news. Last month, I wrote about the breakup of gorgeous couple Georgina Wilson and Borgy Manotoc. Well, the sky has apparently cleared—they are back, happier and more relaxed than ever, which makes loads of their pals, including moi, happy to see how much lovelier they look the second time around.

Wherever they are seen together, super-nice guy Neil Arce and his eye-catching love Bella Padilla can’t keep their eyes off each other. One immediately sees what a new love is all about.  Let’s hope that glow and sparkle do not go dim, dahlings.

With so many friends and married couples I know, love not only gets dim but goes into total blackout!

This wonderful couple has never been happier and more in love. Stunningly beautiful miss with the four Bs and TV host/emcee Issa Litton seems to have found her prince charming in smart and witty ABS-CBN personality Philip Cu-Unjieng. When you see one of them, you can be sure the other is not far behind.

This time I do hope “that look of love” will be there for a long, long time. There may only be one obstacle, dahlings. Philip’s marriage to statuesque beauty Patricia Panlilio has not yet been annulled. This will be another wait-and-see game for the parties concerned, n’est-ce pas?

Loud whispers came my way that one of my close pals is leaving his/her top position in a popular lifestyle magazine. Apparently, the offer to start a new publication backed by a renowned business-genius tycoon was too hard to resist. Good luck, palangga.

When two letter Js meet, it’s like lightning striking the same spot twice. When tall, handsome and trés eligible bachelor Jesse Ho Maxwell would chat with me in the past, he’d say, “Hey, Maurice, introduce me to a nice girl I could fall for.” Well, I looked and watched him date others until, bingo! His tall, gorgeous princess breezed his way. Since then, adorable Jessica Kienle, also born with the four B’s, has been swept off her feet by her prince Jesse and they have been inseparable since then.

This is a couple that moi sincerely hope ends up in the “I do” league of togetherness, dahlings.

This handsome and renowned interior designer and architect has had an “on-again, off-again romance” with one of our gorgeous beauty queens. Although both have been separated from their spouses for years, they have kept up a “here today, gone tomorrow” romance, since the beauty shuttles between Manille and Europe.

The last time our gang got together, he swore that, “this time it’s really finished, we have ended the affair.”

Now comes the loud whisper that this dashing gentleman has been going gaga over a stunning beauty with a letter “Z” in her name. They are trying to keep things low-pro, but nothing ever lasts that low-profile in this town.

Naturellement, he says, “we are just friends,” but to the gang it looks like “more than just friends.”

In the meantime, the women in his gang of true friends are keeping their fingers crossed that the beauty queen stays away from the gentleman’s life and lets him move on once and for all, palangga.

Next, the controversial separation of this old-wealth couple. The heiress became a beauty abloom after the heartbreak she went through, while the business tycoon continued with his dangerous liaison.

Now we are told the tycoon has his roving eye on another woman. The woman who initially caused the breakup of the happily married couple (we thought) is fuming over her lover’s newfound interest.

On the same note, a handsome business hotshot—his ventures include a TV station—according to loud whispers, is about to let go of his long-time girlfriend for a newcomer on the scene.

True or false? Well, we shall wait and see.

For several months now, my palangga, Southern belle Jeena Llamas, and her ex-husband Ernie Lopez have been separated, making Jeena tell me once, “Now I can breathe freely again by not being a Lopez.” After all, she also comes from a pedigreed line in the South.

But as the saying goes, what comes up must come down. I was told that there is the case of their children. No decisions have been made so far. So, again, we will have to wait and see.

Jeena has never looked prettier doing her thing. Ernie is also moving on with his obligations in the family business.

Like I’ve always said, never judge a book by its cover. Once a marriage breaks up, all sorts of reasons are given by their friends, but the bottom line is one never knows what really happens in the privacy of the bedroom, di bala?

And on a sweet note, looking incredibly happy and repackaging herself in a more glamorous way is the miss with the four Bs Mons Romulo. “I’m free again, yes, Maurice, thoroughly free again with the granting of my annulment,” she told me enthusiastically, after being very low-profile for some time while waiting for that key of “freedom,” dahlings.

And so, life goes on in our social jungle where some win and some lose, palangga.