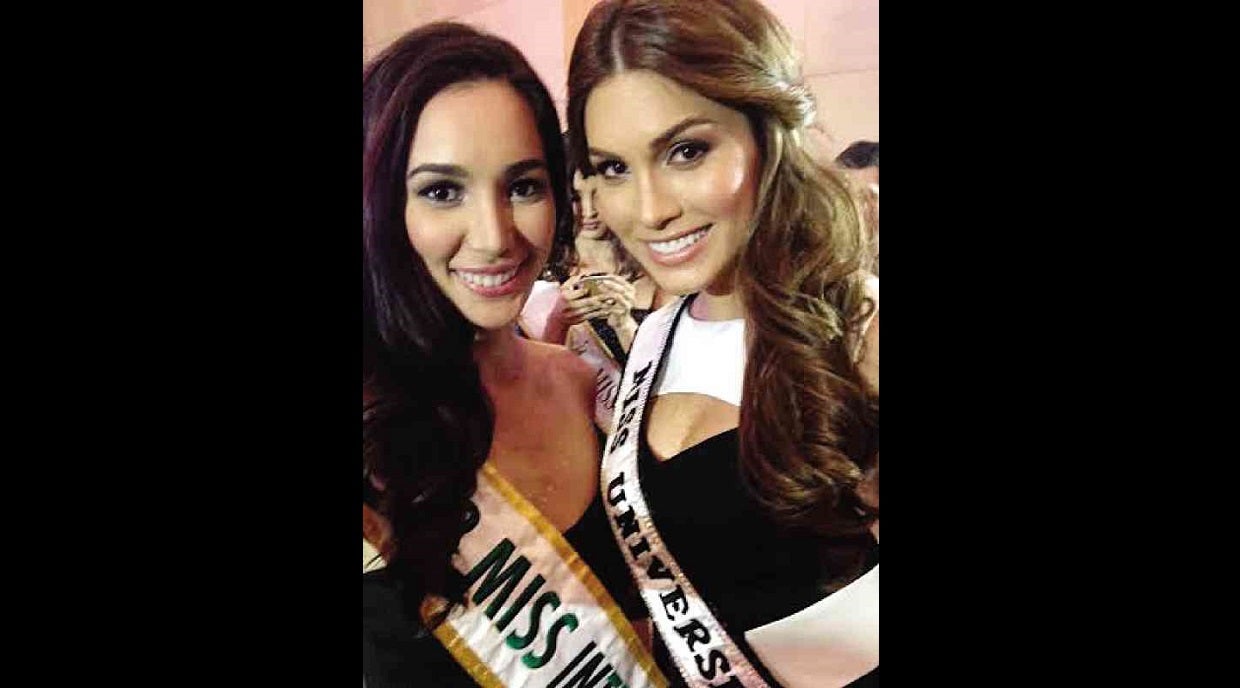 Chilling with Ara, Bea Rose and Pia–or stories from the ‘warfront’

Tonight is the Bb. Pilipinas pageant and for sure, a big, fanatic segment of the population will be tuned in. I might be, too. While I’m no beauty-contest junkie, I’ve started to take interest in our beauty queens since I had the chance to dine with them, and had a fun, chill time.

For instance, I will remember 2013, in part, for the late after-dinner goodbye with Bea Rose Santiago. We just finished dinner at SM Aura, after “Filipino Para sa Filipino,” the benefit show of Inquirer Lifestyle and the Philippine fashion industry for the survivors of Supertyphoon “Yolanda.”

As we said goodbye, we called out to Bea Rose, “Good luck in Tokyo!” She was leaving for the international pageant in a week or so. She would win Miss International.

At that dinner, I was thinking this young woman would really deserve the title should she win it. Not only was she pretty, we told ourselves, she was also a very engaging conversationalist, with lots of anecdotes, and very down-to-earth.

The three were flying at 2 o’clock that morning for Capiz.  A very hectic schedule, indeed. I asked them how they managed to look cool, if not pretty, despite their physically taxing schedule.

“We just learn to laugh at ourselves,” said Bea Rose. “To see fun in every situation. To amuse ourselves while waiting.”

And they cited instances of how they could see comedy even in the stuffiest society events, like “nakaka-nosebleed na English-san” which Bea Rose, being a Filipino-Canadian, has no difficulty with.

Should they really be traveling alone when they go to their respective pageants, like what Miss Supranational Mutya Datul did in Belarus, and which no less than President Aquino himself took note of? In his small talk with the beauty queens when they paid him a courtesy call, what caught his attention was the trivia that they flew by themselves—handling flight schedules and luggage, with Mutya missing her flight.

That’s how it should be, they said; they should know how to fend for themselves. Traveling alone is part of the discipline of a beauty queen.

At another lunch, much later, Ara recalled to us how, en route to the Miss Universe pageant in Moscow, she traversed the airport, pushing her luggage that surely weighed a ton—beauty-pageant wardrobe is heavy stuff—in her high platforms. “And with my Bb. Pilipinas sash on,” Ara described that moment, now with a chuckle.

Ara could only laugh at the memory of her teetering and wobbling this way and that way, until her luggage finally tumbled on the floor.

She hoisted them back on the cart, with her sash—and beauty queen pride—intact.

Poise even in the most laughable situation, and style not consumed in self-consciousness—that’s a feat.

At that same lunch, Ara spoke of how her life has changed, and yet, in some ways, it hasn’t changed. She’s a chemistry graduate whose job, before she joined the pageant, was to sell chemical products to commercial firms, such as San Miguel.

She found it funny and nice the first time she visited the firm’s office, this time as Bb. Pilipinas and no longer as technical sales agent, that she said, “I didn’t need an ID anymore, haha.”

In fact, she did the beauty-queen walk, albeit lightheartedly, with a wave, around the San Miguel office.

She recalled how, before joining the pageant, she was trying to get a consensus among her clients on whether she should or should not join, by asking them that “if they wanted me to join or they think I have a chance, buy the product,” she said with her comic pitch.

It’s quite noticeable how these beauty queens, once they decided to join the pageant, went about it with such single-mindedness that their methodology is impressive. It’s quite unlike in the 1970s, when militant women’s groups decried beauty contests as sheer exploitation, with the docile, nubile contestants herded like sheep to the slaughterhouse.

Today, even the most indifferent observer would note that many of these beauty queens are neither ditzy nor clueless; they know what they’re doing and what they could be possibly up against.

They usually see the beauty contest as a way toward self-improvement, if not a better life. Over that lunch, someone mentioned how a winner was able to use her prize money to buy a carabao for the farm back home.

And they so want it. For instance, Pia said how she’s been modeling since she was 11, how she joined the Star Magic circle of teen artists, and finally the beauty boot camp. (Lifestyle ran a story last March 16 on how rigorous a beauty boot camp is.)

Pia and these beauty queens plan their path to success, and work hard to get there. Most days, Pia said, they go home only to crash in bed, dead tired.

Competition doesn’t faze them. We were engrossed listening to their stories of how it really was in the pageant itself—how they would emerge from their room each morning noting how the other girls were dressed, how Ara told herself, the moment her name was called third runner-up in the Miss Universe, that this was more than enough for her. “Sobra-sobrang blessing na,” she muttered to herself, admitting that winning the title itself was already a bonus she could have lived without right that instant.

Seeing these beauties onstage, crowns on their heads, or in photo shoots, is far different from breaking bread with them, so to speak. It’s relatively easier to stare at the camera, especially for this generation that has mastered the selfie, than to have a candid—and relatively honest—conversation with people.

But there are those who become even more beautiful once you talk to them over lunch or dinner. Then they show the flavor of their character. Offhand, Margie Moran Floirendo or Gemma Cruz come to mind.

I know that Madame Marquez Araneta and Bb. Pilipinas stalwarts like Conchitina Bernardo and, years ago, Pitoy Moreno, would give their ward tips on how to behave at the dinner table or at socials. But then, you can teach class and behavior only so much.

I don’t know if Ara, Pia and Bea Rose have been coached on how to behave at the social table. But they surely know how to conduct themselves in a social setting, and quite effortlessly. They’re not stuffy at all. We enjoy chilling with them.

Beauty is better when it comes with laughter. Lots of it.