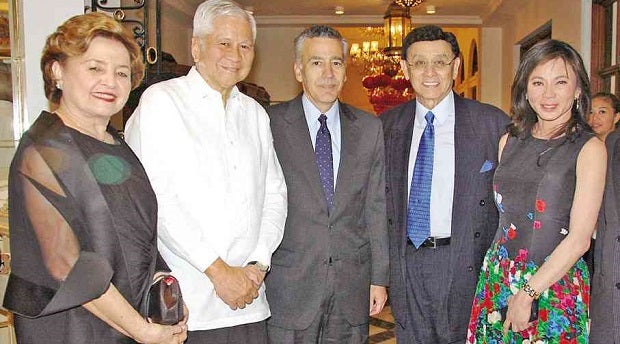 French fashion brand Hervé Léger celebrated femininity and glamour during the recent opening of its first store in Asia at the East Wing of Shangri-La Plaza, Mandaluyong City.

Capturing the event’s theme were guests of honor Vicki Belo, Tootsie Angara, Small Laude, Tessa Prieto-Valdes, Cristalle Belo, Heart Evangelista and Stephanie Kienle-Gonzalez. These gals have the body to wear Léger, but some trying-hard ones ended up looking like ridiculously wrapped whales.

Blurbs say that “the ultra-chic Hervé Léger look is designed with the infamous, body contouring dress in mind, seamlessly sculpting the female silhouette with signature banding construction,” and must be worn by women who really have the sculptured body for this iconic “bandage dress.”

I happened to have seen the tall, gorgeous beauty Audrey Lopez Puckett wearing a Léger years ago, and she looked great, considering she already has five children!

Vicky Zubiri, who also has the figure for a Léger outfit, didn’t waste time and bought four outfits in different colors.

Léger has always been copied, its cheaper versions tagged “made in China.” Oh well, the real one is now here, at Level 1, Atrium, East Wing of Shangri-La Plaza.

Another celebration was that one held recently at The Peninsula Manila, the premiere of the documentary “Tradition Well Served.”

It narrates the history and development of The Peninsula Hong Kong, founded by the Kadoorie family of the Hong Kong and Shanghai Hotels (HSH) group, one of the world’s oldest and most-respected hotel companies.

The Peninsula Bangkok staff is shown creating the most extravagantly decorated krathong (lotus-shaped container) for the Loy Krathong river festival, while The Peninsula Tokyo brought in cherry blossoms inside the hotel.

But the docu’s highlight, as far as the Filipino audience was concerned, is The Peninsula Manila’s annual Christmas concert, naturellement.

The Peninsula Paris, which opened this year, is included in the docu, with details of the painstaking restoration of its location—a late 19th-century classic French building with Haussman and Neo-classic details, which first opened as the Hotel Majestic in 1908.

Après the screening, the guests stayed on, talking about how thoroughly impressed they were by the docu.

Lina, Mayorga and wife Paulina, as well as McDonald’s Philippines founder and chair George Yang sang a few numbers to celebrate the occasion.

The dinner was excellent and everyone had a grand time at Manila’s Grand Dame—like we always do when my palangga Johnny is around, di bala?