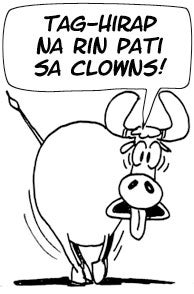 Send in the clowns? Yes, but numbers dwindling

MANILA, Philippines—Being a clown is no laughing matter during hard times.

That was the somber verdict as the World Clown Association wrapped up its annual convention on Saturday after a decade, which has seen their numbers dwindle.

More than 230 clowns from around the world attended the event outside Chicago, gathering to share skills and hopefully encourage a new generation to don a red nose, makeup and a pair of oversized shoes.

But it’s an art pursued more as a labor of love of laughs these days than for a living.

“There are very few clowns who do it full-time anymore,” says Deanna Hartmier of Winnipeg, president of the World Clown Association and a clown for 18 years.

“When big companies that, for 10 years, hire 12 clowns for their Christmas party suddenly have budget cutbacks, well, guess what? They are hiring less clowns.”

Her organization touts 2,500 members worldwide, a nearly 30-percent decline since 2004. Most are over 40 years old.

That includes Arthur Pedlar, 81, of Southport, England, who started clowning in 1938 when he was a child.

Unlike many on the circuit, Pedlar—a “tramp” clown who goes by the stage name Vercoe—does not perform at children’s parties but mainly presents his silent comedy, often involving a unicycle and musical instruments, for audiences comprising the deaf, handicapped and elderly.

While cruise ships have become the modern-day equivalent of the vaudeville circuit, many young performers drawn to clowning opt for higher wages by becoming aerial performers, which are more in demand, he says.

“There is a shortage in Europe of first-rate clowns,” he says.

At the convention, Pedlar shows DVDs of clowning icons of the past, like Emmett Kelly or Buster Keaton, to a new generation of clowns aged 6 to 15.

He says he wants “to expand their thinking that clowning is not just blowing up balloons or throwing a pie in somebody’s face.”

It’s an art form requiring skill and concentration, he says.

“The thing we can’t teach is clowning. We can teach skills but unless they know how to feel an audience and respond to them, they will not be accomplished,” he says.

“You can’t just put on a ping-pong, ball-sized nose and draw a big clown face, and you’re a clown.”

Clowning in the family

One of his protégés is Allie Alvarez, 12, from Orlando, Florida, who started clowning this year because she “thought it would be fun to make people laugh.”

Clowning isn’t new in her family—both her mother and grandmother perform. Alvarez learned new tricks through the workshops but performed before a public for the first time on Thursday night. “They all laughed,” she said.

Despite the early attraction, however, she expects to be only a part-time clown. “I would do it on the weekends,” she says. “It would be too much work for me.”

The convention helps keep clowns in touch at a time when many cannot practice their craft full-time.

Many are volunteers or use the clown skills they’ve accrued for other professions, such as public speaking or stand-up comedy.

Hartmier, 48, a full-time clown who has performed all over the world, says it often means traveling long distances for paid work.

At the convention, there are seminars on a wide variety of clowning skills—face painting, magic, juggling, balloon making, handling props and developing skits.

“It’s the untrained clowns who have scary makeup, who don’t know how to approach people. They’re the ones scaring the kids.”

Clowning is best, she says, when it’s therapeutic.

“Laughter really is the best medicine,” she says. “That being the case, clowns can really touch some people in ways that sometimes can be miraculous.”